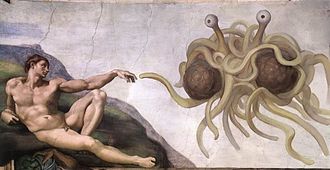 "Touched By His Noodly Appendage

The Flying Spaghetti Monster created the universe. He is invisible, but he can be felt by a touch from his noodly appendage. On the first day, he separated the sky from the water. On the second day, because he could not tread water well and was tired of flying, he created land, as well as a beer volcano. He wandered around in a drunken stupor, creating random stuff, including water and land for a second time, as he forgot he did it the previous day. He then eventually created man, who lived in the Olive Garden of Eaden until the Flying Spaghetti Monster almost destroyed the world in a flood caused by a cooking accident. His first followers were pirates, whose decline was the cause of global warming.

The Flying Spaghetti Monster allows his followers to do mostly whatever. At one point, he issued his eight "I'd Really Rather You Didn't"s (originally ten, but two of the stone tablets on which they were written were dropped on the way down from Mt Salsa). These "I'd Rather You Didn't"s focus on the theme of being nice to people, and not being overbearing with proselytizing.

He doesn't have large temples, as one of the eight "I'd Really Rather You Didn't"s says "I'd really rather you didn't build multimillion-dollar synagogues / churches / temples / mosques / shrines to [His] Noodly Goodness when the money could be better spent ending poverty, curing diseases, living in peace, loving with passion and lowering the cost of cable."

The clergy and followers, known as Pastafarians, are pretty nonchalant about most things. Every Friday is considered a religious holiday, but there is no set way to celebrate.

He is good friends with the God of Pepperoni Pizza, and gets along well with Parm Essancheese.