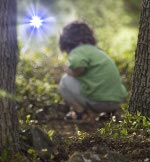 Young looking folk from the forest who are always accompanied by a fairy companion. Found in large expansive forests with strong magical energies. Living life in small treehouse villages and wearing shades of brown and green. They work constantly tending for their homes and nature. They live lifestyles accustomed to elves and halflings and are always cheerful. They are commonly found in Families of four as parents never have more than two children. However, many of their needs are provided for by Forest Spirits or Fairys, as they call them. Magical creatures who accompany these people everywhere. Fairy Youth commonly reach a point in their lives where they stop ageing, keeping a youthful energy and appearance. This can go unnoticed often as many are of elvish decent.

Forest life can be found too simple for many Fairy Youths and these types go traveling frequently. Taking with them their guardian fairy and a small supply of equipment. They are expected to continue upholding the ways of nature and are always helpful. Many times they can give such a tender appearance as to be considered unprepared. This is offset by their extraordinary reflexes and unshaking courage. Traveling youths often return speaking several languages. While a few travelers fail to return to the magical forest of their childhood, they all do end up living in treehouses. Which is quite the peculiar thing, really?

Every Fairy Youth has a few things in common. Listed are suggestions to keep in mind for when creating a Fairy Youth.

Races: Any with a mild connection to nature or fey. Elves, half-elves, and halflings are very common. Dwarfs and Humans can be found in Forests near mountains.

All of the following are class features of the Fairy Youth.

Weapon and Armor Proficiency: Proficient with Simple weapons, Shortswords, Longswords, and Shortbows. Proficient with Light Armor and Shields. (except tower shields.) They cannot gain any more weapon or armor proficiency by taking feats.

Flurry(Ex): When using a light weapon with which you are proficient and as a full round action, you can make an additional melee attack at your maximum base attack bonus. Also, any attacks gained from a high base attack bonus can be taken at maximum as well.

Finesse Longsword(Ex): Longswords can be treated as light weapons when using the Weapon Finesse feat or the Flurry Ability.

Aura of Courage(Su): A fairy youth is immune to fear (magical or otherwise). Each ally within 10 feet of her gains a +4 morale bonus on saving throws against fear effects. This ability functions while the youth is conscious, but not if she is unconscious

Spring Attack As the Feat. When used in conjuction with the Flurry ability you gain one additional attack. However, you take a -2 to any attacks of appurtunity that you provoke while moving. You still do not provoke a AoO from your target.

Run As the feat.

Woodland Stride You may move through any sort of undergrowth (such as natural thorns, briars, overgrown areas, and similar terrain) at your normal speed and without taking damage or suffering any other impairment. However, areas that are enchanted or magically manipulated to impede motion still affect you.

Improved Evasion(Ex): This ability works like evasion, except that while the youth still takes no damage on a successful Reflex saving throw against attacks henceforth she henceforth takes only half damage on a failed save.

Whirlwind Attack As the Feat. When used in conjuction with the Flurry ability, you can attack twice against every target within reach.

Camouflage(Ex): A Fairy Youth can use the Hide skill in any sort of natural terrain, even if the terrain doesn’t grant cover or concealment.

Inspired Heroics(Ex): Three times per day a Fairy Youth can use Inspired Heroics. They gain a +1 morale bonus to saving throws, +1 bonus to attack roles, and +6 temporary hit points. This effect lasts for 10 rounds. These bonuses stack every four levels. This is a swift action that can only be taken during your turn.

Timeless Body(Ex): A youth no longer takes penalties to her ability scores for aging and cannot be magically aged. Any such penalties that she has already taken, however, remain in place. Bonuses still accrue, and the youth still dies of old age when her time is up. There are some rare circumstances where they can willingly allow themselves to age in stature and appearence. But these states are always temporary at best.

Greater Teleport As the spell. Usable twice a day.

Fairy Companion At 1st level, a Fairy Youth gains a Fairy companion who accompanies a Fairy Youth on their adventures. Fairys' are invisible but can be percieved as colors, such as yellow, white, green, or blue when within 30ft. Fairys' speak Common and Sylvan but have no vocal apparatus so instead they speak empathically within 60ft. If a youth releases their companion from service, they may gain a new one by performing a ceremony requiring 16 uninterrupted hours of prayer. This ceremony can also replace a fairy that has perished.

When a character multi-classes they lose all their Supernatural abilities but retain her all Extraordinary abilities. They are considered free from the realm of the Spirit Forests and lose their Fairy companions and cannot take any more levels in the class.

Bonus Feats: The epic Fairy Youth gains a bonus feat (selected from the list of epic Fighter bonus feats) every 3 levels after 20th.

Every Fairy Youth recieves a starting package at 1st level. It is always sized correctly for the user.

Suggestions for when playing a Fairy Youth.

Religion: Fairy Youths worship nature in all its forms. They seek to live in working harmony with nature and recieve blessings from the Forest Spirits. Their are no formal rights or rituals.

Other Classes: Fairy Youths work well with others and enjoy supporting others in their roles.

Combat: Fairy Youths enjoy combat as an exercise in fitness. When provoked they prefer to attack from a distance or use hit-n-run tactics.

Advancement: Fairy Youths desire to experience the world around them but rarely multi-class. The few that do never return to the forest lifestyle again.

Fairy Youths in the World[edit]

Common descriptions of Fairy Youths in the everyday world.

Daily Life: Fairy Youths spend their time working in the Spirit Forests. In return for tending to and watching over the forest, the Forest Spirits provide them whatever they need. Much of their day is spent running, cleaning, woodworking, cloth-making, and swimming.

Notables: There are no notable members of this class in all of History. They tend to keep to forest wilderness and avoid the popular spotlight when traveling.

Organizations: Often found living together in small communities deep the forests. Always showing welcome to polite visitors. They like new things. Sometimes found traveling outside the forest or mountains.

NPC Reactions: Often treated as foriegn visitors from distant regions. Everyone notices their youthful appearance and activity but most folks ignore them all together.

Characters with ranks in Nature can research Fairy Youths to learn more about them. When a character makes a skill check, read or paraphrase the following, including information from lower DCs.