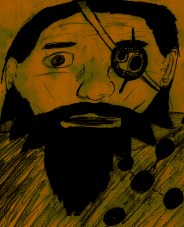 For some time now, you have felt the ebb and flow of the stream of magic, the Ether. As your skill as an engineer and your knowledge of the physical world improved, you began to root yourself in this Ether, until you realized that it could be bent and shaped, just like the materials that you have worked with all your life. Who better to create with the Ether than an engineer?

A character may become an Ether Engineer for a number of reasons, the most common being personal aptitude. A character may have joined a group of Engineers that was led by Ether Engineers, and aspired to join their ranks. Most Ether Engineers come from the ranks of sorcerers, who find even greater uses of their inborn power, and wizards, who usually discover the methods of shaping the Ether during their studies. A few Bards take to this prestige class, some to gain even more varied abilities, some for the skills and knowledge, and some just for novelty.
The most important Ability for Ether Engineers is Intelligence. Intelligence governs their Spellcasting and gives them more Skill points.

All of the following are class features of the Ether Engineer.

You cast spells as a Sorcerer does. You know all the spells from the following list:

Ether Circut (Sp): You begin each day with a number of Ether points. When you create a Magic item, you may spend these in place of Experience points on a one-for-one basis. You may still need to spend some Experience points if you run out.

Engineering (Ex): There is no level-based skill rank limit for your Craft (Engineering), Knowledge (Engineering), or your Profession (Engineer) skills. Furthermore, every time you advance your Ether Engineer level, you gain two bonus ranks in each of these skills.

Bonus Feats: You may chose your Bonus Feats from any Metamagic or Item Creation feat. You need not meet the prerequisites for these feats.

Engineer the Ether (Sp): When you are creating a Magic Item that requires you to cast a Spell or use a Spell-like Ability, you may make a special Craft (Engineering) check to ignore that requirement. The DC to bend and shape the Ether is 25+ Spell level. if you should fail by five or more, you incure a risk (75%- a Knowledge (Engineering) check you make at this time) that the item explodes, dealing 1d6 x (the level of the spell you failed to emulate) fire damage to all within 15ft. A Reflex save (DC 10+ spell level) halfs the damage.This also ruins any matirials in th item and requires you to start anew.

Ether Tapping (Sp): When you are creating a Magic Item with a caster level requirement, you may make a special Craft (Engineering) check to ignore this requirement. The DC is 15+ the required caster level,- your caster level. The DM makes this check secretly. If you fail by five or more the item becomes cursed, and you have no knowledge of this. if you were creating a construct, its sole purpose becomes to destroy you by any means nessesary.

Master Engineer (Sp): You must choose between the Battle Engineer, or the Ether Tessellation abilities, below:

Battle Engineer (Ps):You can create Kinetic bolts of energy. This is a Psionic ability that costs, instead of Power Points, 'Ether Power Points'. You begin every day with 5+ your Intelligence Modifier of these points. By spending 1 point you can create a Kinetic Bolt effect. The Bolt has the following statistics:

Upon manifesting this power, you choose cold, electricity, fire, or sonic. You create a ray of energy of the chosen type that deals 3d6 points of damage to one creature or object in range. You must succeed on a ranged touch attack to affect the target.
The bolt gains an additional effect depending on your choice of damage type.

Energetic: An Energetic Bolt deals +1 point of Fire damage per die and sets flammable, unattended objects alight.
Ionic: An Ionic Bolt deals Lightning damage and forces the target to make a Fortitude save or take an extra 1d4 points of damage from Lightning attacks for 1d4 rounds.
Null: A bolt of this energy type deals +1 point of Cold damage per die. The saving throw to reduce damage from a Null Bolt is a Fortitude save instead of a Reflex save.
Penetrating: Manifesting a Penetrating Bolt provides a +2 bonus to the save DC and a +2 bonus on Ether Engineer level checks for the purpose of overcoming power resistance.A Penetrating Bolt does not deal energy damage.
Resonating: A Resonating Bolt deals –1 point of damage per die and ignores an object's hardness. A resonating Bolt deals Sonic damage.
Shivering: A Shivering Bolt leaves a seeping wound, dealing 1 point of damage every round until the subject is healed of at least one point of damage. Multiple hits from Shivering Bolts stack for the purposes of wound damage. A Shivering Bolt does not deal energy damage.
This power's subtype is the same as the type of energy you manifest.

Ether Tessellation (Sp): A number of times per-day equal to your Intelligence Modifier, you may attempt to create a magic item as a Full round action action. You must meet the prerequisites or successfully use your Ether tapping abilities to create this item. You must also have all of the necessary materials for the item to be created. The item retains its magic effects for a number of rounds equal to your Ether Engineer level x a d6 secretly rolled by the DM, to a minimum of 5. After this duration ends, the magic separates from the item, immediately ending all effects created by the item. Depending on the use of the item, this could be dangerous for the user. If you are attempting to create magic armour or a magic weapon, you may elect to use non-masterwork items, but the duration is halved.