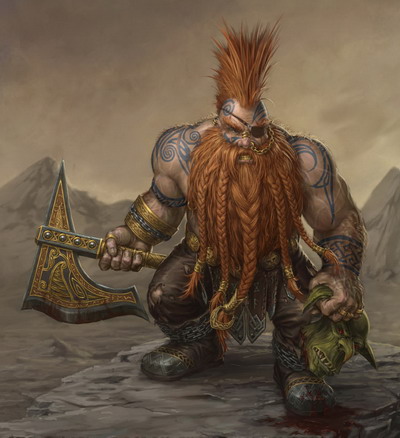 Dwarves are renowned for their love of drinking and fighting, but no one exemplifies these ideals better than the dwarven berserker. Whether they're frothing savages from the craglands, religiously fervent zealots of the god of war, or the legendary battleraging kuldjargh, dwarven berserkers are brave warriors capable of entering a frenzied rage through ritualistic singing and/or drinking. Legend has it that they have been touched by the gods, and they firmly believe that if they die in battle they will return to the land of the living even stronger than before.

The crazed style of combat that dwarven berserkers engage in results in dwarves who are immensely strong and durable and, unfortunately, mentally unstable. Dwarven berserkers usually focus only on what they need to fight and survive, and their personal hygiene tends to suffer as a result. Their armor is almost always thick and, more often than not, heavily spiked. Those that prefer spiked armor, such as the battleragers of the infamous Gutbuster Brigade, tend to incorporate it into their fighting style. Many dwarven berserkers also cover their entire bodies in tattoos, brands, and ritualistic scars, with any skin left bare covered in war paint before entering battle. Outlandish hairstyles are also common. When riding into battle, they favor specially-trained dire boars or wolves adorned in spiked barding.

Despite their simple attitude towards battle, dwarven berserkers are a key element of dwarven warfare. Their almost suicidal style allows more strategic fighters to plan and execute complex techniques on already worn-down enemies. As such, berserkers command grudging, if fearful, respect within dwarven society.

They are known to have coined such phrases as "nothing evens a race like an axe to the knees" and "never turn down the ale, you never know if it will be your last." Most live short, glorious lives, and those who live long enough to gain fame and prestige amongst their comrades become immortalized in song -- and that's all most of them long for in exchange for their sacrifice for their people.

Tier System: If you are using the tier system, the dwarven berserker was designed so that it would maintain the same tier as its parent initiator class, or tier 3. The berserker frenzy class feature is essentially a maneuver with an extended duration, and since you are unable to initiate or recover other maneuvers while frenzied, it effectively balances out. It could be argued that berserker frenzy might push the character into tier 2 territory simply because it allows them to go longer before having to recover their maneuvers, but they still lack the versatility and verisimilitude of the other tier 2 classes such as the sorcerer or psion, they have fewer skill points to distribute to vital skills, and they lose out on some nice class features including capstone abilities.

Weapon and Armor Proficiencies: You are proficient with all simple and martial weapons and all types of armor and shields (except tower shields), including exotic dwarven armors and shields.

In addition, you may select maneuvers and stances from the following disciplines even if you would normally be barred from doing so: Devoted Spirit, Iron Heart, Stone Dragon, and Tiger Claw. If you are advancing swordsage or warblade initiator levels, you may also opt to recover all of your maneuvers by spending a full-round action consuming alcohol or singing (even if off-key) rather than meditating or taking a full-attack action. If you are advancing crusader levels, you recover your maneuvers as per the standard rules, but like all initiators, you may drink or sing for five minutes when readying your maneuvers in place of meditation or prayer.

Finally, unlike other martial classes, you may retrain either a maneuver or a stance each time you gain a level as a dwarven berserker. This allows you to change a previously known stance into one from the four permitted disciplines so that you may live up to your role more appropriately.

Berserker Frenzy (Ex): Once per encounter, up to a number of times per day equal to your class level, you can expend one of your readied maneuvers in order to fly into a berserker frenzy as a free action. While frenzied, you temporarily gain a +6 bonus to Strength and you may make one additional attack at your highest base attack bonus, but you suffer a -2 penalty on any attack rolls you make if you choose to take the extra attack. You are also treated as if you were one size category larger for purposes of making special attacks in combat such as bull rush, grapple, and overrun attempts. While frenzied, you suffer a -2 penalty to Reflex saving throws due to your emboldened brazenness.

While frenzied, you cannot initiate any maneuvers, nor can you use any Charisma-, Intelligence-, or Wisdom-based skills (except Autohypnosis, Intimidate, and passive uses of Listen and Spot) or Concentration, drink potions, or use any abilities that require patience or subtlety such as casting a spell, sneaking around, or using items that require a command word. You do, however, retain the benefits of any stance you were in prior to entering your frenzy (but you cannot switch to another stance while frenzied). Your frenzy lasts a number of rounds equal to 3 + your Con modifier. You may prematurely end your frenzy at any time. At the end of the frenzy, you become fatigued for an equal duration or until you take the time to recover all of your maneuvers through drink or song.

For purposes of meeting prerequisites, your berserker frenzy counts as the barbarian rage class feature. They do not stack, however, and if you possess more than one type of rage ability you must select which one any such feats or other abilities pertain to when selecting them.

Gruff Demeanor (Ex): Dwarven berserkers are not known for their cuddly ways, and they tend to be rude, uncouth, violent, and cocky. As such, you suffer a -4 racial penalty on all Charisma ability and skill checks you make except with other dwarves who grudgingly, if somewhat fearfully, respect your role in dwarven society. However, you now use your Strength modifier when making Intimidate checks, and your Strength score counts as your Charisma score for any prerequisites for intimidation- or combat-related feats or abilities, such as Imperious Command.

Armored Mobility (Ex): At 2nd level, you no longer take a penalty to Jump checks due to your base land speed, and you do not suffer armor check penalties to Balance, Jump, or Tumble checks. If frenzied, you instead gain a circumstance bonus equal to your effective initiator level. At 4th level, your base land speed increases by +10 feet. This increase does not apply to alternative movement types such as fly or swim speeds, but is retained even if you are wearing medium or heavy armor or carrying a medium or heavy load courtesy of your dwarven heritage. Additionally, when using the Jump skill, your maximum distance is no longer limited by your speed, and you can attempt a long jump without a running start. These benefits apply even when you are not frenzied unless otherwise specified.

Greater Berserker Frenzy (Ex): While in a berserker frenzy, you are immune to mind-affecting spells and effects, and the act of entering your frenzy breaks any conditions caused by similar effects. You are also temporarily immune to any effects that grant negative levels, ability damage, ability drain, or cause energy drain effects, but regain any of these conditions once your frenzy ends if they existed prior to entering your frenzy. You can also scorn death and unconsciousness while frenzied. As long as your frenzy continues, you are not treated as disabled at 0 hit points, nor are you treated as dying at -1 to -9 hit points. Even if reduced to -10 hit points or less, you continue to fight normally until the frenzy ends. At that point, the effects of your wounds apply normally if they have not been healed. This ability does not prevent death due to massive damage or from spell effects such as slay living or disintegrate. Additionally, you gain DR/— with a value equal to one-half your effective initiator level for the duration of your frenzy. If you have DR from other sources, they stack. Damage reduction can never reduce damage to below 0.

Finally, if your effective initiator level is 12th level or higher, your bonus to Strength increases to +10 while frenzied, and you are considered to be two size categories larger for purposes of special attacks such as bull rush and overrun instead of just one size larger.