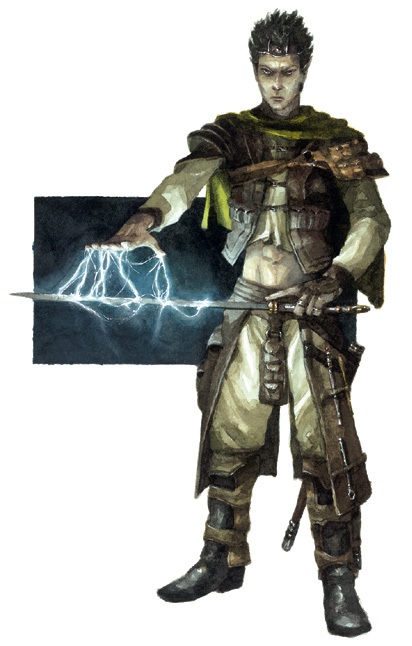 The duskblade combines martial skill with magical aptitude, enhancing himself and his attacks with a range of magical effects. Neither the best warrior nor the best mage, the duskblade occupies a place somewhere in between. His weapon serves as a focus for his magical powers that he uses to unleash destruction upon his foes.

Races: any that can use arcane magic.

Weapon and Armor Proficiency: The duskblade is proficient with all simple and martial weapons and with light and medium armor.

Arcane Attunement:The duskblade learns how to manipulate the basic forms of magic and may use the cantrips dancing lights, detect magic, ghost sound, & read magic as spell-like abilities At-Will as a standard action. The duskblades caster level for these abilities equals his duskblade levels.

Advanced Technique:At levels 4, 9, 14 & 19 the duskblade gains a single bonus feat, which may be any feat for which he meets the prerequisites.

When a Duskblade uses his Arcane Strike, all the damage (from the ability and the regular physical damage) bypasses damage reduction as a magic weapon. If a duskblade is wielding two weapons each weapon is charged with the energy.

Combat Arcana:Through intense study the duskblade learns how to manipulate the laws of magic to provide him with an array of combat magic abilities. Though they are spell-like abilities a duskblade may wear light or medium armor without incurring the risk of arcane spell failure. The caster level for all of a duskblades combat arcana equals his duskblade level. There are four grades of Combat Arcana: Adept, Magus, Savant, and Archmage.

Unless otherwise noted combat arcana's last 24 hours and require a standard action to activate. At any level when the duskblade learns a new combat arcana, he can also replace a combat arcana he already knows with another combat arcana of the same or lower grade.

The first combat arcana that a duskblade learns is how to form an intangible shield of force that hovers in front of him, blocking enemies attacks. The shield may take on whatever appearance the duskblade chooses, appearing as a regular shield or a more esoteric form, such as a ball of energy or aura of shifting shadows. The appearance in no way changes the effect of the shield. This ability duplicates the effects of the Shield spell, except that the bonus provided increases by +1 for every 6 levels, to a maximum +7 shield bonus at level 18.

Dark Sight - The duskblades eyes darken, allowing him to take in more visible light. He gains Darkvision out to 60ft and can see normally in magical darkness.

Mage's Acceleration - The duskblade channels arcane energy through his body, increasing his reaction time and speed. He gains a +3 insight bonus on Reflex saves and his speed increases by +20ft. The speed increase is considered an enhancement bonus.

Revealing Sight - Channeling arcane energy through his eyes, they glow with a faint silver light and the duskblade gains the ability to see invisible and etheral creatures normally. Such creatures are visible to him as translucent shapes, allowing him to easily to discern the difference between visible, invisible, and ethereal creatures. The duskblade does not gain knowledge of how the creature is invisible, nor does this arcana reveal illusions or enable him to see through opaque objects. Furthermore it also does not reveal creatures who are simply hiding, concealed, or otherwise hard to see.

False Reflection - The duskblade is able to absorb the light that would normally reflect off his body, effectively rendering him invisible as the spell. Any action that would break invisibility ends this effect.

Energy Sensitivity - By detecting the faint energy that all creatures emit, the duskblade can sense their proximity. He gains Blindsense 30ft.

Mage's Flight - The duskblade can telekentically lift himself off the ground, gaining a fly speed of 60 (or 40 feet if he wears medium or heavy armor, or if he carries a medium or heavy load) and good maneuverability. He may charge and run while flying, and this ability follows the rules for the Fly spell if it is dispelled.

Combat Transformation - The duskblade uses his own body as the focus for his magical energy, enhancing his natural ability. He gains a +2 insight bonus to Strength, Dexterity, and Constitution.

Dimension Stride - The duskblade can step behind the barrier of reality and emerge instantenously nearby. He can use the spell Dimension Door as a swift action, but his range is limited to short (25ft. + 5 ft./2 levels). The duskblades class level equals his caster level.

Disruptive Arcana - With a single touch of his weapon the duskblade can erase the patterns of magic bound in a spell. The duskblade makes either a melee or ranged touch attack with his weapon. If the attack hits the target takes the duskblades arcane strike damage and is subject to the effects of a targeted Dispel Magic. The duskblade's class level equals his caster level for this arcana.

Dimension Step - The duskblade can flicker through reality with only a moments thought. This combat arcana functions as Dimension Stride, but there are no restrictions on the duskblades actions after using it.

Disjoining Arcana - With a single touch of his weapon the duskblade can erase the patterns of magic bound in a spell. The duskblade makes either a melee or ranged touch attack with his weapon. If the attack hits the target takes the duskblades arcane strike damage and is subject to the effects of a targeted Greater Dispel Magic. The duskblade's class level equals his caster level for this arcana.

Greater Combat Transformation - The duskblade's power increases and he is able to pour more energy into his body than another person could handle. He gains a +4 insight bonus to Strength, Dexterity, and Constitution.

Sensitive Mind - The duskblade channels his energy through his mind, further enhancing it's sensitivity and perception. He gains Telepathy 100ft.

Whirling (Attack) - The duskblade may throw or shoot his weapon in a 60ft line, making a single attack against each enemy. The weapon deals damage as if wielded normally, either melee or ranged, including bonuses from feats. If the duskblade throws his weapon the weapon immediately returns to his hand after the last of the attacks is resolved. If the duskblade fires his weapon the ammunition fired is instanteously destroyed after the last of the attacks is resolved. The duskblades arcane strike deals it's normal damage to each target that is hit by this effect.

Greater Mage's Flight - The duskblade is able to carry himself aloft with superior grace and speed. His speed increases to 120ft and he gains perfect maneuverability.

Energy Immunity - Calling up the raw elemental forces to protect him, the duskblade gains immunity to acid, cold, electricity, fire or sonic damage for 24 hours. The duskblade chooses the type of energy when activating this arcana and may change the desired energy type with a standard action, losing the immunity to the previous energy type.

Mage's Protection - The duskblade constructs a mental barricade around his mind, guarding it from insidious attacks. He gains the benefit of the Mindblank spell.

Supreme Combat Transformation - The duskblade's body is transformed by the raw magical power coursing through it. He gains a +6 insight bonus to Strength, Dexterity, and Constitution.

Arcane Insight: At 4th level the duskblade's study of magic allows him a brief glimpse into the probable future, letting him position himself better to avoid disaster. He adds his Intelligence modifier to his Initiative checks.

Arcane Might: A duskblade favors magical ability and intellect over brute fighting prowess. At 7th level and after he adds his Intelligence modifier to weapon damage rolls.

Pervasive Arcana: At 8th level and beyond, magic flows through a duskblades body, enhancing his normal abilities to a near super-mortal level. Individually targeted spell-like effects have a 20% chance of failing against the duskblade, instead simply sliding off his body. This spell failure chance increases by +10% at 12th, 16th, and 20th level. The effect of this ability does stack with blink and similar effects.

Mettle:At 12th level the duskblade gains the mettle ability. If the duskblade succeeds on a Fortitude or Will save against an attack that woud normally produce a lesser effect on a successful save (such as a spell with a saving throw entry of Will half or Fortitude partial), the duskblade instead negates the effect. The duskblade does not gain the effect of mettle when he is unconscious or sleeping.

Residual Arcana:The duskblade has mastered the art of magical manipulation and his body is permanently infused with raw magical energy. He becomes a native outsider and no longer needs to eat, breath, or sleep. In addition the duskblades damage reduction improves to DR 10/cold iron and magic.