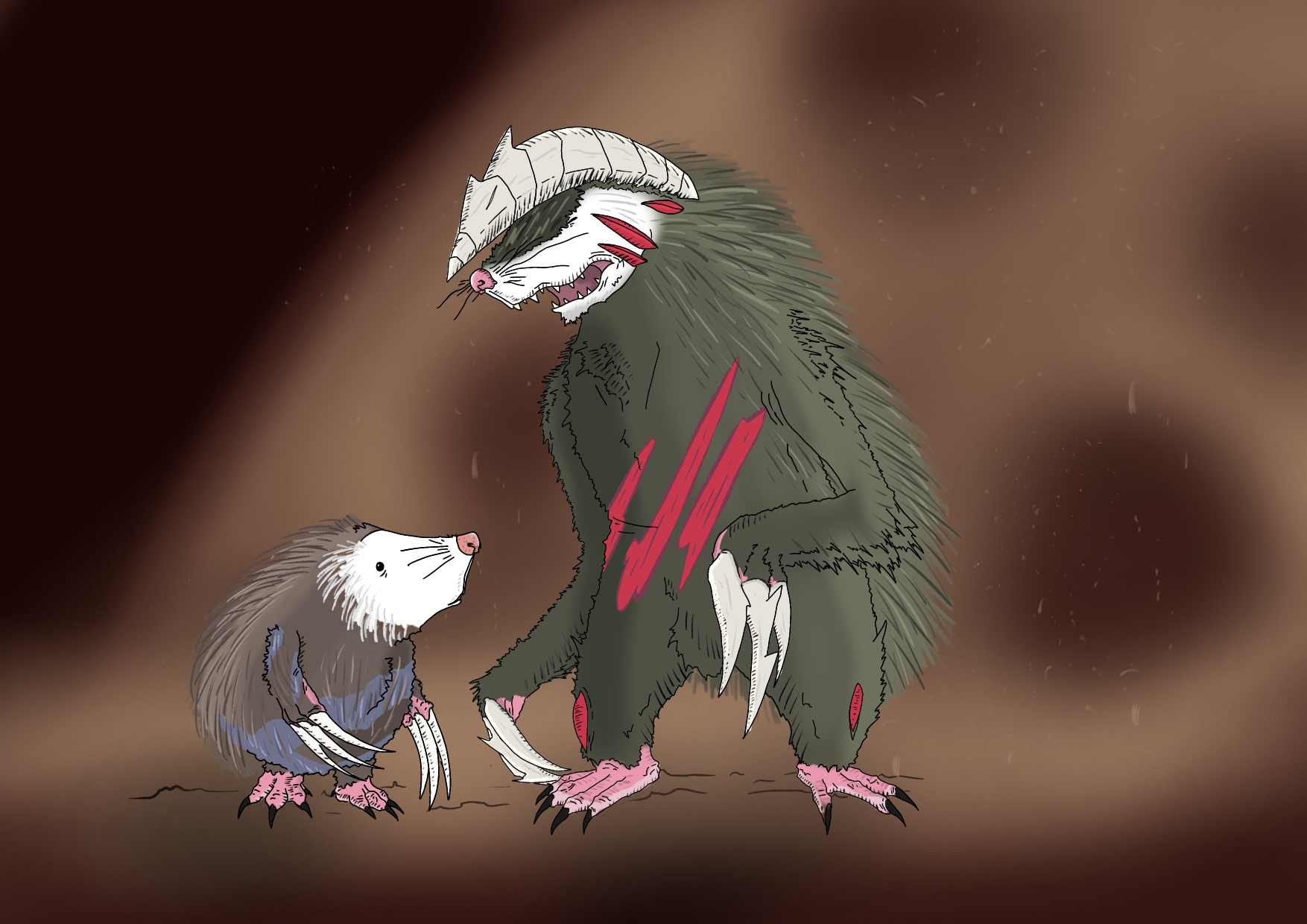 Drilbur is a chubby mole-like Pokémon. It has a plump black body with blue streaks along with a white snout and white claws. It has blue round spot on its palms. Drilbur has wide eyes that are almost completely white but contain a single black dot-like pupil. It has oval shaped feet that have three toes. It has three sharp white claws on each arm. Its claws are almost connected, but the three lines show three claws.

The Drillbur line has little history, most of it dating to their discovery. Dillbur's are often considered to be pests by farmers as they will often either purposefully or accidently dig up roots of crops but Excadrills are always approached with extra caution for their reckless nature.

Drillburs live deep underground and don't usually diversify in groups of more than five or three, often with an Excadrill as a leader, they stick to the dark underground they are familiar with until they evolve at which point they are driven away by the lead Excadrill. Excadrill on the other hand is a very reclusive pokemon, never being accompanied by other of its kind other than a few Drillburs, they are far more aggressive and bad tempered than there previous evolution.

Drillburs, and therefore Excadrills, follow a simple three letter naming process, communication is usually linked to short barks so the shorter the name, the shorter the warning cry.

A small, swift mole Pokémon that burrows underground.
Ability Score Increase. Your Dexterity score increases by 2.
Age. Drillburs mature and evolve at the age of 9, the general lifespan for Excadrill is little less than 12 years due to their constant fighting but some can live much longer if the proper foes are avoided.
Alignment. The general evolutionary line is neutral in nature, usually becoming chaotic after evolution.
Size. Drillburs generally measure 1ft in height, your size is tiny.
Speed. You have a base walking speed of 30 feet, and a burrowing speed of 30 feet.
Darkvision. You can see in dim light within 60 feet of you as if it were bright light, and in darkness as if it were dim light. You can't discern color in darkness, only shades of gray.
Ample Digger. Your main line of attacking is ambush from below, as an action you may dig underground for a maximum of 3 turns before needing to resurface. Digging through the hard dirt makes your long claws natural weapons, they deal 1d6 + Dexterity modifier. This can allow you to make surprise attacks from beneath as a bonus action but in doing so you resurface. (Friends and Foes can use the tunnels you make if they are your size or smaller)
Mold Breaker. You gain a proficiency in the Athletics skill.
Sand rush. You have resistance against Poison but a vulnerability against cold damage.
Mud slap. You hurl a small mass of mud at a target, the target must succeed on a Dexterity Check, DC 12 + Dexterity modifier, on a failure the target receives 1d4 worth of damage and is blinded for a round.
Languages. You can speak, read, and write Common and Terran.

To mimic evolution growth, when you reach level 6 you can take this feat. When you do, your very form changes.

Prerequisite: Drillbur
You grow tougher, and develop your ferocity and size a bit, to about 2,04 feet, your size is small.

Prerequisite: Excadrillite (requires attunement)
(A large marble-like spherical magical stone, the faint tint of rainbow is visible within) If an Excadrill comes in possession with an Excadrillite they can grow to a level of power far superior than ever thought possible.

The mega evolution is only temporary for it is extremely energy consuming, you retain your mega-evolution for a d4+2 amount of rounds before needing to revert, you must make three long rests before using your mega-stone again.