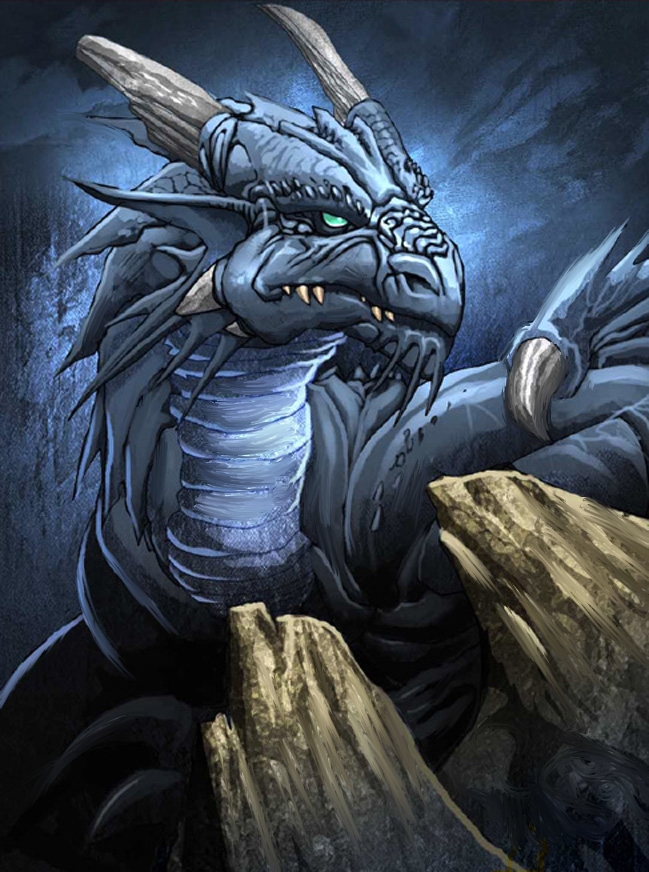 thanks to el-grimlock of DeviantArt for use of the image, and to its creators for its making.

A Dragon Paragon takes a Dragon's innate power, and increases it to its true levels. Raising its breath weapon, natural weapons, size modifier, and giving it the power feared among their kind.

Abilities: A Dragon Paragon requires a high Strength modifier to make proper use of its natural attacks, and its size bonuses, Constitution is also an important modifier for the Dragon Paragon. Of the abilities, Charisma is the only stat you can perhaps take a hit in.

Races: Only a Dragon may become a Dragon Paragon.

All of the following are class features of the Dragon Paragon.

Weapon and Armor Proficiency: A Dragon Paragon has proficiency with Simple Weapons, and Light, and Medium Armor, but has no proficiency with Shields, and use of a shield hinders a Dragon's ability to fight with both claws, effectively allowing only one attack using his claws.

Paragon Breath Weapon (Su): A dragon's natural breath weapon is increased by 1d6 at first level of Dragon Paragon, and increasing by 1 die type/level as standard. The Breath Weapon still requires 1d4+1 rounds to recharge before being usable again.

Growth: At 2nd Level of Dragon Paragon, the Paragon may increase, or decrease its size category by one level per day. See the notes below for restrictions on size-changing.

Feat: Improved Intiative (Substitute for Amphibious in a maritime campaign.)

Religion: Dragon Paragons have no specific religion they may follow, though most tend to follow the Dragon Pantheon as their main polytheist religion.

Other Classes: A Dragon Paragon interacts similarly to how a normal Dragon does so with other classes.

Combat: A Dragon Paragon makes use of its natural weapons, and breath attack to deadly effect, its size modifiers and easily high Strength give it an edge in melee combat while its high Hit Dice gives it the hit points needed to demolish its adversaries.

Advancement: A Dragon Paragon's best multiclass options lie in front-line classes. A Dragon Paragon sits best on the front-lines, doing the most damage it can to enemies while weaving in and out of, occasionally having to take, opposing attacks.

Dragon Paragons in the World[edit]

Daily Life: Dragon Paragons function fairly as their race does. They spend much of their time collecting treasures, and lazing about their chosen locale. Some choose to venture into local towns to barter, and/or feast upon the local populace, while some garner followers and become worshipped creatures.

Notables: Cinder Legbreaker, Dragon Paragon3/Wizard8/, A known Red Dragon who subsists off of the people of Beons, in the South-east of the continent. He deals in human slaves, arcana, and has a fair sized following of Kobold and Humanoid worshippers.

Organizations: Dragons as a rule are territorial, and it's rare that one dragon meeting another does not end in bloodshed. There are, however, some exceptions.

NPC Reactions: Dragon Paragons are viewed as per their coloration, but are mostly mistrusted and feared by humanoid populace. At best, they can expect tolerance, at worse they will sometimes be attacked.

Characters with ranks in Knowledge (Nature) can research Dragon Paragons to learn more about them. When a character makes a skill check, read or paraphrase the following, including information from lower DCs.

Dragon Paragons in the Game[edit]