"We were changed by the coven and the god Malar, but we are our own peoples now!" Elder Displacer Kin 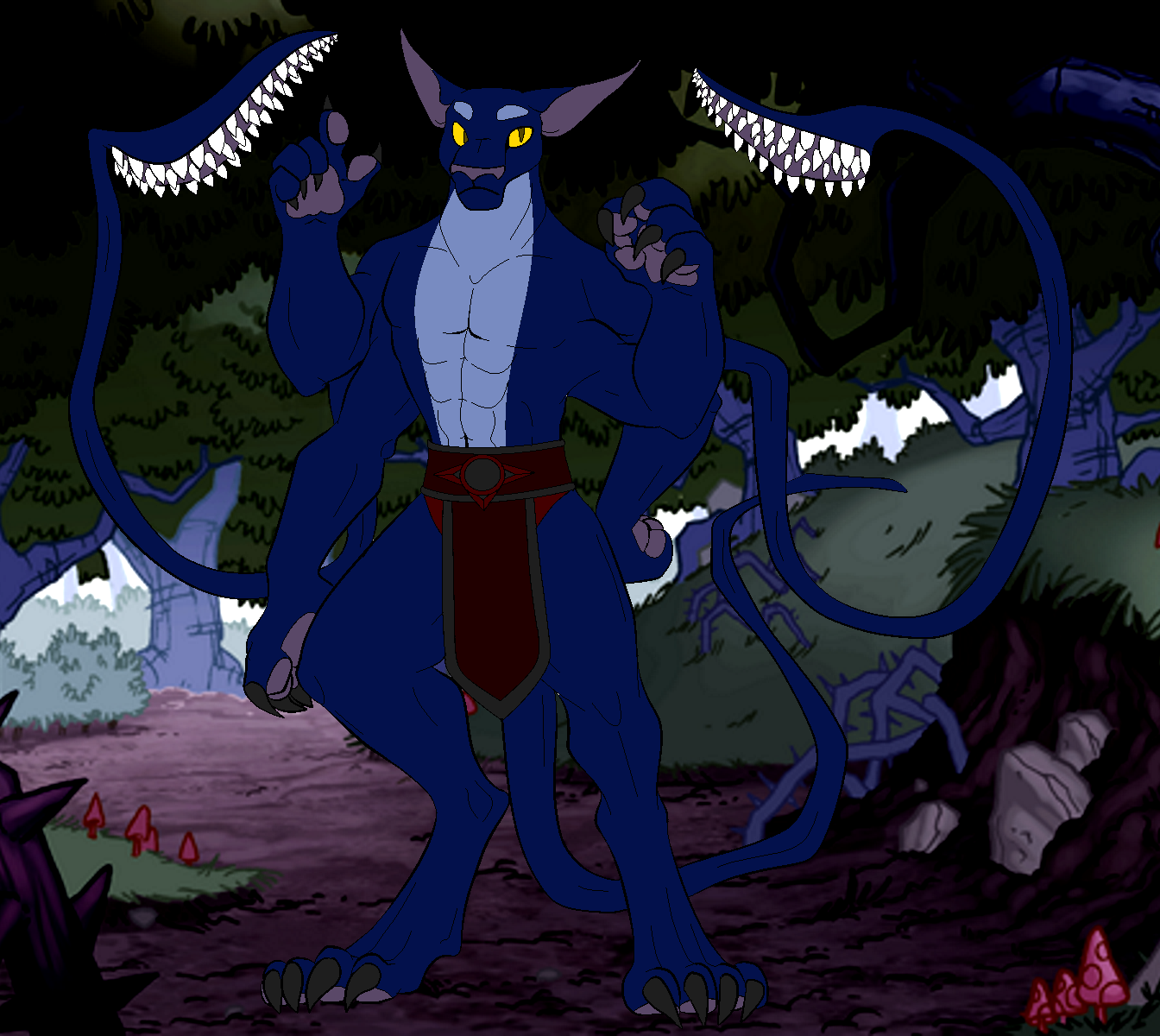 Displacer Kin resemble a buff, graceful, and athletic humanoid with a panther-like head and a tail, usually covered in blue-black fur. However, its otherworldly origins are clear in its six limbs, two legs and four arms. They also have two tentacles sprouting from its shoulders, both ending in pads tipped with spiky protrusions. They have sharp teeth and retractable claws, which are their primary weapons in combat. They are tall and slender and have green or yellow eyes that glow with an internal light that persists even in death.

Displacer Kin are the result of a coven of hags who tried to create the perfect hunter under their control. Praying to their god Malar, God of the Hunt, the displacer beasts became great hunters, combining quick, stealthy movements with both natural and arcane camouflage to surprise their prey. However, due to their already innate intelligence being increased due to this change, they Displacer Kin slayed the coven for their freedom and escaped into the wild forests, where they created a new tribe.

Displacer Kin usually dwell in thick forests or other environment that usually get dark fairly quickly. They more often then not keep to their own, their resemblance their more monstrous kind making most common races (humans, elves, dwarves, and the like) view them as monsters or new breeds of lycanthropes. If not for their natural distrust of others even seeing them, said common races would most likely hunt them down out of fear.

Most tribes of displacer kin usually reside a series of dens, said dens can either be burrows and caves under hills and mountains or even small villages of huts hidden within the trees. Each den consists of a tribe that are of equal parts male and female. Each functions like a family unit of hunter/gatherers that works the land around a tribes den. A den will typically contain some young kin, plus an elder or two. The tribe is usually ruled by a Chieftan or Cheiftess, which are usually decided contest of strength, feats, and hunts.

Displacer Kin do share a few things with their more monstrous kind, such as their love of the kill and hunting habits. The Kin will somtimes kill for more than just food but sometimes for sport, like when a new chief is being selected. The targeted prey, usually the more challenging the better, are often toyed for the entertainment of the displacer kin, until they are ready to strike the killing blow.

Displacer Kin can hunt alone or in small prides that demonstrate skill at setting ambushes. A single Kin will strike and withdraw, luring prey into a densely wooded area where its hunters wait. Tribes hunting near trade roads recall the frequency and schedule of regular caravans, laying down ambushes to pick off those caravans.

Displacer Kin usually take their tribes name as a family name, while their given a formal name at their coming of age. The name of a tribe usually comes from some even when a tribe is newly created.

The Displacer Kin are a race of formerly monstrous feline-folk that live within the dark places of the world.

Age. Displacer Kin mature at the age of 15 and live for an average of 300 years.

Alignment. Due to the influence of the coven of hags and the god Malar that created them, Displacer kin usually lean toward Chaotic Evil.

Size. There is usually a small height variance between Displacer Kin, but your size is Medium.

Speed. Your base walking speed is 40 feet.

Limited Displacement. On their turn, the displacer kin may use a bonus action to project a magical illusion that makes it appear to be standing near its actual location, causing attack rolls against it to have disadvantage. If it is hit by an attack, this illusion is disrupted until the they make a deception roll of 14 or higher. The illusion is also disrupted while the displacer kin is incapacitated or has a speed of 0.

Multi-attack. The displacer kin makes two attacks with its tentacles.

Languages. You can speak, read and write Common, Sylvan, and one other of your choice.