You have always been alone, ever since your creation, no one has stuck with you. You cannot die, you cannot feel, thus you cannot live. So what will one do with their meaningless existence, will you create the friends you never had, will you become so powerful as to create your own meaning, will you destroy everything or save it, or will you accomplish all these things. The choice is yours, after all, its the only choice you've ever been given.

Death is the ultimate source of power[edit]

A Death Monarch is a mighty force to be reckoned with. They are cunning and dangerous, or knowledgable and cautious. They are mostly of neutrual alignment, But there are cases of both evil and good ones. Examples would be a necromancer, or a Cleric who utilizes the dead as a form of force to protect. However this all depends on the setting the world takes place in, and should be discussed with the DM.

You can make a Death Monarch quickly by following these suggestions. First, Intelligence should be your highest ability score, followed by Charisma or Dexterity.

As a Death Monarch you gain the following class features.

You have become a deity, a Death God, or in your case a Death Monarch, as such this energy is vastly different than normal magical energy, this power cannot utilize spells, making the user not able to cast anything while Monarch energy is active. However, as a trade off you gain the ability to create Shadows, or copies of entities that have perished recently (See Shadow Extraction). The Monarch's power grant a plethora of other abilities in exchanged for nullified spell casting.

Starting from 1st level, twice per short rest, you can use your bonus action to make your own shadow rise to assist you (Look statistics for Shadow monster in DND Wiki), it is under your command and will act during your turn using its own action. If you do not command your shadow, it tries its best to defend you, stay alive and fight off enemies within its vision range, in that order. The order can change if you command it so. At 3rd level, you can send your shadow into the shadows of other beings if you can see them, but if this enemy is of the divine variety, your shadow is immediately destroyed, its remains return to you and will regenerate.

Starting from 2nd level, you may attempt to raise a Shadow from a fallen entity keeping the stats of its counterpart but, though depending on the strength of the being, it may be more difficult to create this shadow, three chances are given to attempt to raise a Shadow (DM discretion), if these attempt are expended unsuccessfully, it is impossible to raise a Shadow from this entity ever again. However, if successful, the newly formed Shadow becomes a undying subordinate to the Monarch, it cannot speak but can emote, it will follow any commands given, and shows unyielding loyalty to its master.

At the 4th, 7th, and 10th levels you gain one extra chance in raising a Shadow, for a total of six chances

As a Death Monarch, you may create Shadow versions of recently killed enemies using Shadow Extraction, Starting at 2nd level, you may have as many shadows as your Intelligence modifier, this number increases by one with each successive level

Your Monarch energy has begin to change you, first flowing into your mind, altering your senses'. You can now detect the living beings around you in a 30 ft radius whether obstructed or not on a successful perception check (DM descretion), the closer to death they are the easier they are to detect. However, one may expand this sense to greater lengths if deep concentration is performed, extending the range and granting more information (such as sex, age, etc.). The latter form of the ability is up to DM discretion.

At the 6th, 9th, and 12th levels the range increases by 30ft respectively and no role is necessary for each successive level.

Being a Monarch, you either care deeply for your shadows or at least want them to last as fodder for as long as possible. Starting at 3rd level, you may expend a dice of health to instantly heal any given Shadow, although the strength of the Shadow will depend on the dice required, either a 1d4, 1d6, 1d8, or 1d20 (DM Discretion).

At the 4th level, after becoming quite proficient in the creation of Shadows, you now have the knowledge to attempt Shadow Extraction on items. The items in question does not have to be broken in order to preform Shadow Extraction, however even on a successful extraction the item must make a saving throw (DM discretion) in order to not shatter. A successful extraction allows the Monarch to equip shadow versions of items to his Shadow Subordinates, the subordinate in question must have the proficiency to wield the given item , and only one shadow item may be equipped to any subordinate at any given time.

At the 7th, 9th, and 11th levels, one addition item may be equipped to a Shadow Subordinate

Starting at 5th level, whenever you tack the attack action on your turn you may attack twice.

At the 7th level, the shadows you have created want to do everything they can to help you, this ability allows you to temporarily adorn yourself in their aura, depending on the coverage of the cloak the more difficult it becomes to maintain it. The body parts that are cloaked share the hit pool of the summoned shadow, thus any damage or affect received transfers to the shadow instead of the user. You may do this twice per day, it lasts for 3 rounds, and replenishes upon long rest.

At the 9th, 11th, and 13th the amount of rounds and ease of adorning increases (1 round per respective level)

Starting from 18th level, once per day, you may converge worlds. You turn the surrounding area, size is your choice (But how big is up to the DM), into your Death Dimension. The area returns to normal if you are not within range. All Shadow Subordinates gain 3x movement speed and may appear anywhere in the area at any given time. At the beginning of your turn, both you and your Shadow Subordinates regain Hit Points equal to 8 + your Constitution Modifier + your Intelligence Modifier. Additionally, any entities in this area are instantly extracted and turned into Shadow Subordinates. After the effect takes place, you must succeed a Constitution Saving throw or be exhausted for a given period of time.

The Goal Of Life Is Death[edit]

Death Monarch energy is vastly different from normal magical energy. Your energy is not pulled from the surrounding area or any of the atherial planes, but rather from its own unique dimension. This dimension houses your essence, your very being. It is empty, cold, and devoid of life. Any form of living creature may only reside in this decisions for a short period of time or risk complete annihilation

You have control over your own dimension. Starting at 1st level, you may open small 1x1ft gateways that led to your dimension, they may take any form that you wish, these can be used to deposit anything you wish within your dimension. To withdraw something, one must simply think of the desired item and it shall appear slightly inside the portal.

At each successive level, the size of the portal created can be increased by 1x1ft for a total of 20x20ft

Death Monarchs draw their power not from themselves, but from their own Death Dimension. Starting at 2nd level, you may store your Shadow Subordinates in said dimension. Your shadows can be summoned or stored at will, though they may not be stored while in battle, they can be summoned. While in this dimension, your shadows replenish all hit points and abilities over time (DM discretion). 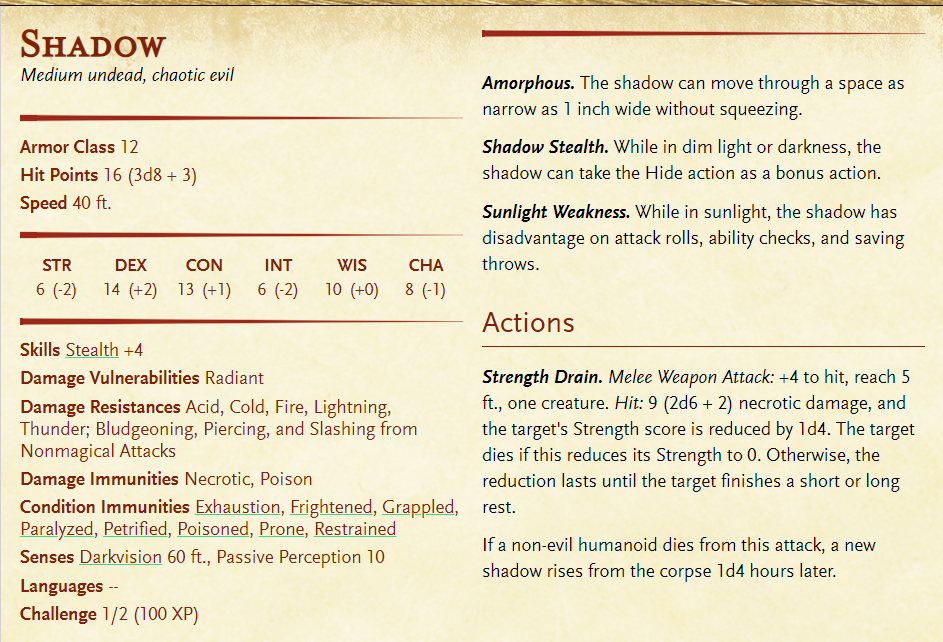