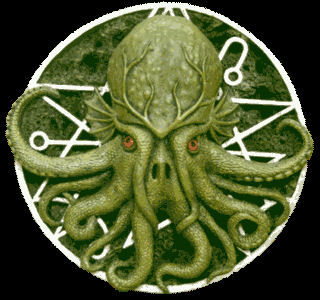 Cthulhu is the Great Old One, Himself, living in death-like slumber at the bottom of the sea. He waits in His home of R'lyeh until the day when the stars are right. No mortal can dare describe in any accuracy what Cthulhu and the other Old Ones look like, but one cultist, Old Castro, came close: Although all of them describe him as resembling a corpulent mind flayer with far more tentacles, and wings that stretch for nearly a thousand feet, while he himself stands at least five hundred feet tall.

Vecna the Maimed lord described Cthulhu several times in the book of vile darkness an excerpt of such being "It would be a mistake to call Cthulhu evil, for he is beyond such petty concepts, he has mastered magic, psionics, divinity, and technology in such a way that lesser beings are incapable of understanding."

None can truly understand the minds of the Old Ones, much less Cthulhu, Himself. All that humans can comprehend is that, right now, He desires His freedom from His prison-home, R'lyeh. He possesses a vast empire across the multiverse, and his work can be found wherever a far realm exists. From Oerth, to Faerun, to Eberron. From the scheming pits of Baator, to the Fields of Arborea. From the order of mechanus, to the chaos of limbo. Cthulhu's touch is everywhere. Thus one can expect he could very possibly wish to expand his dominion.

Many wonder why people bother worshiping Cthulhu for they believe that He will destroy all human-kind regardless of where they stand. Despite this, those who worship Him do so in the hope that they will be spared once He awakens. Old Castro again has something to say on the matter:

Whatever the cause, there are a few groups of worshipers hidden throughout the world. There are, however, few clerics of Cthulhu because He doesn't bother giving mortals any of His divine power, leaving His clerics without spells or other class features, just like an ex-cleric would be. Praying to Cthulhu also doesn't seem to serve a purpose; indeed, any action taken for or against Him have no real result. As such, most people find Cthulhu worship a pointless venture, but that doesn't stop those who do, mainly because they're already insane...However it has been found that recently all his worshippers do in fact gain spells, but they do not come from Cthulhu, they come from his servants Father Dagon and Mother Hydra, who are themselves demigods in power.