The creeper is an interesting creature, easily hiding in greenery and foliage with its green camouflage skin. With nothing more than an oversized head, long torso, and four stubby legs, a creeper's simple appearance hides a great secret: they can ignite combustible gases gathered inside their body, creating a small but deadly explosion. If a creeper is struck by lightning, their power grows exponentially as the electrical energy supercharges their explosive capabilities. 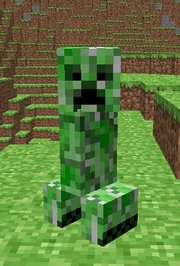 Originally sedentary plants in the swamps of Toril, some magical accident caused them to grow sentience and mobility. They have since spread across the land, residing in forests and across grasslands where their natural camouflage helps them hide. The source of this magical accident is still unknown, but most scholars agree that it was the work of some artificer or wizard playing with powers they didn't understand. One mistake later, the first creepers were awakened.

Creepers are more often than not shy creatures, avoiding detection and staying far away from the dangerous folk of the world, which to them is anything not a creeper. To this end, they gather only in small communities or not at all, wandering the world alone until the day they die. Rarely, a creeper will decide to join a group of adventurers in an attempt to break free from its life of solitude, braving the presence of other sentient creatures as it travels to places it couldn't otherwise reach without the help of its new companions. Due to their self-destructive qualities, they tend to loudly warn nearby creatures when angered, hissing before they explode. Causing themselves to detonate is typically a last resort, like a bee stinging a predator before it dies in the hopes of driving it off or killing it before more damage is done to its companions. A creeper that ends its own life while protecting another person, creeper or otherwise, ended its life in honor, and the members of creeper society commemorate such a hero with stories of its adventures or good deeds for generations.

Though created by magic, creepers are more than capable of sustaining their own communities. They have no need to gather in pairs or groups to reproduce; rather, large enough creepers simply slough off portions of their body into tiny lumps of plants, which slowly grow into a nearly identical copy of its parent. Reproduction is a choice for a creeper, and a creeper cannot accidentally have a child. Only when a creeper is ready will it will a portion of itself to break off, which is immediately conscious and able to move around on its own tiny legs. A creeper that grows up in a society is taught through its early years how to control its explosive impulses, while creeper progenies abandoned in the wild might never learn how to control themselves, combusting in its very first fight and dying a tragic death. As such, creepers have a poor standing with other races, born from the tendency of wild creepers to simply kill travelers that get too close.

All creepers are inherently afraid of cats, to the point where the phobia is an integral part of their existence. Whether this manifests as a belief that felines are devils in disguise, intelligent mass murderous that will strike without a moment's notice, or some other seemingly ridiculous notion, each creeper believes their own theory so wholly that to not believe the theory would to be not a creeper. A creeper that stops believing its feline conspiracy theory would self-destruct, both psychologically and emotionally.

Creepers don't usually name themselves, leaving other creatures to give them names. The names they are given are often joke names or nicknames, but occasionally they are given regular names by their companions as a sign of respect for their power.

Aww Man! The Mean Green Exploding Machine
Ability Score Increase. Your Dexterity score increases by 2 and your Constitution score increases by 1.
Age. Creepers reach maturity at 5 years of age and live for an average of 30 years before they wilt and die.
Alignment. Creepers tend towards more chaotic alignments.
Size. Creepers vary widely in height and build, from barely 5 feet to well over 6 feet tall. Your size is Medium.
Speed. Your base walking speed is 35 feet.
Darkvison. You can see in dim light within 60 feet of you as if it were bright light, and in darkness as if it were dim light. You can't discern color in darkness, only shades of green.
Explode. You explode, dealing massive damage to your enemies as well as yourself. As an action, you can detonate yourself to deal damage to a group of enemies around you and causing damage to weak structures in the process. Each creature within a 10 feet of you, including yourself, must make a Dexterity saving throw with a DC of 10 + your Constitution modifier. You automatically fail this save, but you take half the amount of damage you normally would. On a failed saving throw, a creature takes 4d6 fire damage. On a successful save, they take half as much damage. This increases by 2d6 at 5th level (6d6), and again at 11th (8d6) and 17th level (10d6). Once you use this feature, you can't do so again until you finish a long rest.
Supercharged. Starting at 11th level, your body can partially absorb electrical energy. As a reaction to taking an amount of lightning damage equal to or greater than one third your maximum hit points, you can give yourself resistance to that damage, storing the rest of the charge in your fibers. While you are storing a charge, you are surrounded by a shimmering field of blue energy, doubling the range and damage dice of your Explode. The shell lasts for 1 minute or until you use your Explode. Once you use this feature, you can't do so again until you finish a long rest.
Camouflaged. Your mottled greenish coloration gives you advantage on Dexterity (Stealth) checks when in grasslands or forests.
Armless. You cannot hold two-handed weapons, and cannot hold more than one object at a time. Attempting to speak while holding an object may muffle your words.
Monstrous Plant. Your creature type is Plant and Monstrosity. You have advantage on saving throws against being poisoned, and you have vulnerability to fire damage.
Turned by Cats. Whenever you start or end your turn within 30 feet of a cat, lion, or other feline, you must succeed on a Wisdom saving throw with a DC of 10 + the feline's challenge rating (minimum of 1). On a failed save, you are turned by that creature. While turned, you must spend your turns moving as far away from the creature as you can, and you can't willingly move to a space within 30 feet of the creature. You also can't take reactions. For your action, you can only use the Dash action or try to escape from an effect that prevents you from moving. If there's nowhere to move, you can use the Dodge action. If you end your turn further than 30 feet from the creature and you cannot see it, you are no longer turned by the creature.
Languages. You can speak, read, and write Common and Creepish. Creepish is a language composed entirely of various hissing sounds, and does not have a written form.