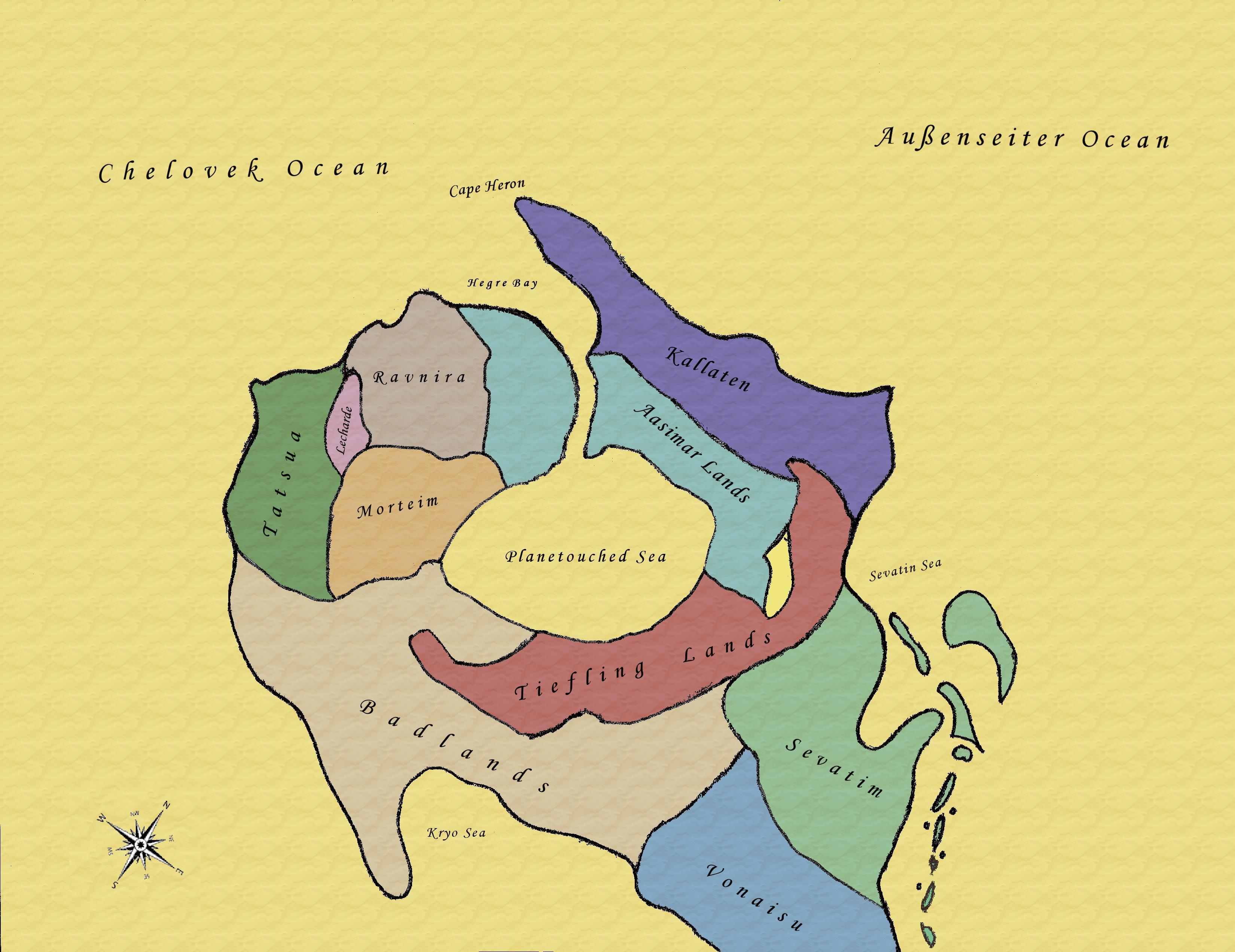 Ravnira is the country around which most campaigns will focus. Located in the north-west of the continent, Ravnira has a very pleasant and mild temperature, with low humidity and medium elevation. Its climate, however, makes it very bad for farming, and as such Ravnira's primary industry is metalworking. Home to the Eisenmeisters, or master inventors, Ravnira is the center for magically enhanced technology (magitek, if you will). While magitek is useful, it is not particularly wide spread outside of Ravnira, and primarily acts to replace magic for some basic functions, making mundane uses for magic more affordable (e.g. auto-cleaners, levitating carriages that follow magitek rails). The most lucrative industry for Ravnira is arms and armor crafting, as well as metal refinement and precious stones and metals. Militarily, Ravnira has a small standing army, but what they lack in size they more than make up for in quality. Ravnira has by far the best and most highly trained military in Paramýth. Their legendary Dragon Legion has been know to come out on top, even when out numbered 10 to 1, and has actually survived a confrontation outnumbered 130 to 1. They have a decent navy, but it is more geared towards reconnaissance and moving troops around. Fortunately, they have a longstanding alliance with Kallaten, the Naval Kings of Paramýth.

Morteim is the second most prevalent country in Paramýth adventures. Located to the south of Ravnira, Morteim has is both closer to the pole and is at a higher elevation, resulting in an unpleasantly cold environment, again not ideal for farming. Because of its mountainous geography, Mortein industry focuses on mining. Their primary trading partner is Ravnira, who refines and crafts the raw ore that Morteim sends them. Morteim has the most magitek in Paramýth aside from Ravnira, due to their close relationship with Ravnira. A secondary industry of Morteim is fishing, but they are nowhere near as big of a fish supplier as Sevatim and Kallaten. As far as their military, Morteim is a rival to Ravnira, with a significantly larger army. While their military is not as well trained, they have a larger army and are much better equipped geographically to fend of invasion.

The Badlands are a frozen, desolate, mountainous wasteland to the far south of Paramýth, home to the remnants of the Vackel Empire. They once controlled all of Paramýth, even the Planetouched Lands. Now, however, the Vake are split up throughout the Badlands, with no leadership or society. The majority of inhabitants are raiders of some form or another, with a few small citadels of civilization throughout. The largest city in the Badlands is still Dadapolis, although it is a shadow of its former self.

The Badlands are not considered a country, as they have no government, military, or other region-wide organizations.

The nation of Kallaten lives up to its name "by the sea". The northernmost country in Paramýth, Kallaten has the longest useable coastline on Paramýth, controls Hegre Bay and Cape Heron, giving it almost unavoidable access to the sea. With warm, almost tropical climate, Kallaten is ideal for farming, and much of its land is utilized for such endeavors. However, most of its industry is focused on shipbuilding, fishing, and trading. Because so much of Kallaten's industry is nautical, it stands to reason that they would have an excellent navy. However while their navy is top-notch, Kallaten's land army is pitiful, almost nonexistent, and they rely on Ravnira and Sevatim for land-based protection.

The nation of Lèchardè is the smallest of all of the nations in Paramýth, being at least a third of the size of any other nation, if not a fifth of the size. Located to the northwest of Morteim and southwest of Ravnira, Lèchardè has the worst military on Paramýth, and has never won a military conflict. However, they are not without their influence. Lèchardè is the center for art, wines, and other fine products. Most of the art and music in Paramýth comes from Lèchardè, making its culture much stronger and more prevalent than its small size suggests. Lèchardèn cuisine is also well known, making it a favorite spot for foreign dignitaries and royalty to meet under a flag of truce. This diplomatic capacity, along with their pitiful military, gives rise to the tradition of staying neutral in most conflicts. In the Seconf Mortein War, Lèchardè made the mistake of assisting Ravnira, particularly in the operation preceding the Battle of Drakon Pass, and was sacked by Morteim in retaliation.

The Planetouched Lands are divided into two halves, the Aasimar Lands and the Tiefling Lands.

Sevatim is surprisingly tropical, having a decent amount of humidity and heat throughout the summer. Sevatim is east of the Tiefling lands, at about the same latitude as Morteim. However where Morteim has a cold, dry, and at a high altitude, Sevatim generally isn't. Most of the important parts of Sevatim are piedmont, a more average climate and elevation, perfect for farming. Sevatim produces most of the food for Paramýth, as well as cotton, tobacco, opium, and indigo. Militarily, Sevatim is not particularly powerful. They have lackluster organization and logistics skills, making large units difficult to manage. Individually, Sevatin warriors are among the best. However, they are not as good at fighting alongside other warriors. Thus most internal conflict is not resolved through large battles but more minor skirmishes. Sevatin swords are known throughout Paramýth for their strength, sharpness, and overall quality, made by folding the metal hundreds of times.

Tatsua is the westernmost country on Paramýth. Their primary export is meat and leather. Most of the Tatsuan meat that gets exported is preserved, usually by smoking and salting. Ravnira, Lèchardè, and Morteim are the only countries that can import raw Tatsuan meat cheaply. Aside from cattle herders, there are also minor farms scattered across the Tatsuan countryside, and the breeding of horses is a major part of the culture. The Tatsuan military is strictly average; its not the biggest, its not the best trained, and its not the best equipped. However, Tatsuan military tactics rival even that of Ravnira. Making good use of their elite cavalry legions, Tatsua is very good at open field battles, which Tatsua has in abundance.

Vonaisu is has the smallest population of any of the countries on Paramýth, smaller even than the Badlands. 80% of the population lives on the border of Vonaisu and Sevatim, and 60% on the northern portion of that border. Vonaisu is the weakest country, with little to no military and very few exports. The only real contribution of Vonaisu to the other countries of Paramýth is that it is the only location on Paramýth where Ais forms (the name "Vonaisu" means "Of Ais"). Ais is the main form of refrigeration in Paramýth, staying at -10º C and not melting or heating up in warmer places. The only thing that can melt it is molten iron. There is a tribe in southern Vonaisu who know the secret to harvesting it, and they sell it to the bigger cities in northern Vonaisu for Sevatin fur and tools. The cities then sell the Ais to Sevatim for even more fur and tools, along with food. That is the main form of income for the whole of Vonaisu.

The nations each have a country that they get a lot of things from, especially names, language and accents.