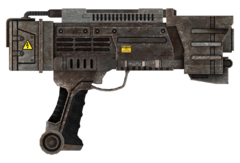 The ultimate in pre-war nonlethal weapons, most notably used in the annexing of Canada, the compliance regulator is an electroshock energy weapon that emits a blue coiling beam for pacifying targets by stunning them with a painful paralyzing beam. However, despite being electrical in origin, it deals no additional damage to robots or power armor.

The weapon can deal either energy (lethal) or nonlethal damage. This decision must be made before making an attack roll.

On a successful critical hit, organic targets must make a successful Fortitude save (DC 25) or be paralyzed for 1d4+1 rounds.