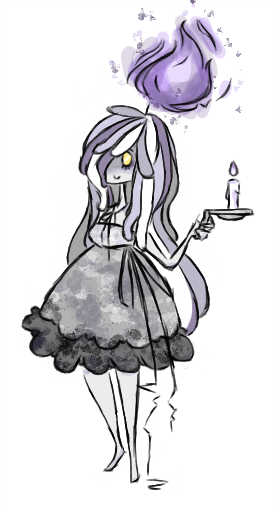 Image provided by courtesy of Worst-Username

Candleheads are a humanoid race who are easily differentiated from other races by their waxy and slightly tinted skin which comes in a variety of soft, pastel colors like blue or yellow. Atop their head is an ethereal flame which seems to center from a single point along the midline of their head, much like the wick of a candle. Candleheads have heads of wax hair cascading under the flame. The flame atop a candlehead's head does not burn like a traditional flame, though it flickers and wavers like one, especially in response to a candlehead's emotional or physical state. It was one thought the flame reflected a candlehead's alignment. This has been held as true and led to many witch hunts against candleheads perceived to have an "evil colored" flame. The flame does not embody any heat and as such it does not burn or spread to other burnable objects unless the candlehead wills it to. Like a scented candle, candleheads emit pleasant aromas, but usually only when they are in a calmed state. Their eyes are like lights which stare out from their waxen faces.

The candleheads are a storied race thought to have largely been from fairy tales of enchanted objects. They have in fact existed for as long as wax candles were in use. They are believed to come about as waxen statues initially, who then acquired a flame which signals their sentience. At first, they were mainly thought to be a possessed construct. Later, they were seen to be rather similar to fey in disposition, and many believed some form of wild magic from the Feywilds was what had allowed them to be in the first place. However, being mainly still a construct, they are not quite descendant of fey, and so lack the trait of ancestry trademark of them.

During those many years after they first came about, candleheads have built many extensive complexes of interlocking tunnels and underground cities, as they have long considered the deepest caverns of the earth to be their home. Candleheads societies have traditionally been ruled by multiple royal families, with each major settlement being ruled by two kings, one dedicated to the persecution of the evil, and one to strive for the betterment of the good. All major candlehead settlements are well-known for their beautiful quadriplexes of grand halls, within which the candleheads host extravagant banquets and celebrations of all kinds. All the greater candlehead cities are sealed to outsiders by tremendously powerfully enchanted gates that prevent all but candleheads from entering, unless such an outsider is escorted inside by a candlehead who maintains physical contact with the outsider.

Candleheads are enemies with quite a few different races. They have been at war with the dwarves for 200 years. The drow have tried to kill many of the kings of the candleheads for thousands of years, as the latter has often been a nuisance with their ability to light up caverns of the secretive Underdark. The svirfneblin are not on good nor bad terms with the candleheads. Most humans are engaged in a strong trade relationship with the candleheads, and often sell weapons and armor to the candleheads in exchange for gold, silver and sometimes diamonds. Candleheads often lead illustrious mining operations due to their ability to guide in the dark, as well as their ability as flamebearers to detect dangerous gas leaks or a lack of air.

Candleheads are open-minded but keep to themselves when in public. They tend to get along fine with surface dwellers, elves most of all. They tend to be very calm and quiet beings, keeping sane when others may be hyperventilating. Many candleheads are timid and shy, leading people who have glimpsed them to believe them to be fairies or ghosts. However, like other fey, candleheads take much pleasure from playing the occasional prank. They are described to be graceful and whimsical in movement and speech, speaking in airy, light, and quiet tones.

Candleheads often have names closely related to nature, such as names based upon ores, weather or celestial bodies.

Candleheads are a race of waxy-skinned humanoids bearing an ethereal flame atop their heads.
Ability Score Increase. Your Charisma score increases by 2.
Age. Candleheads mature around the same age as humans but live to be about 140 years old.
Alignment. Candleheads are drawn into an alignment by their background or class, but prefer neutral alignments. You can choose your base flame color based on your flame below.
Size. They tend to only be slightly shorter than a human on average. Your size is Medium.
Speed. Your base walking speed is 30 feet.
Candle Light. Candleheads have a candle that is on top of their heads and it is a part of them. The candle sheds bright light in a 5-foot radius and dim light for an additional 5 feet.
Heat Resistance. Since you are used to an eternal candle burning on your head, you are resistant to fire damage.
Aroma. You know the produce flame cantrip. When you reach 3rd level you can cast the calm emotions spell once. At 5th level you can cast the flaming sphere spell once as third level spell without requiring any material components. The candle on your head must be burning for these spells to work, and you can use it as an arcane focus. Charisma is your spellcasting ability. You regain the use of each spell when you finish a long rest.
Pleasant Smell. Candleheads are naturally calming to be around, and their scent works as aromatherapy. You can meditate while your candle is burning as part of a short rest to emit a delicious or fragrant aroma about you. At the end of the short rest, you gain 1d6 temporary hit points. These hit points are lost after you complete a long rest.
Water Susceptibility. At the beginning of every turn you are soaked, you take 1d4 cold damage.
Construct Nature. You are a being molded of wax and imbued with whimsy. Your creature type is construct instead of humanoid. As such, spells like cure wounds don't affect you, and you are immune to spells like crown of madness or dominate person because they specifically target humanoids. You do not need to eat, drink or breathe, though you may do so if you wish. Rather than sleeping, you enter an meditative state for 8 hours each day. You are fully aware of your surroundings and notice approaching enemies and other events as normal.
Languages. You can speak, read, and write Common and Sylvan.

Flame Colors According to Alignment[edit]