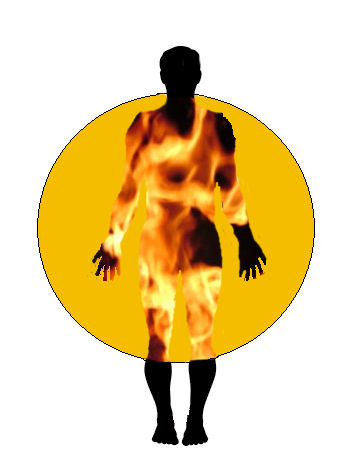 Burnsider was one of the First Age vampires, capable of walking over water, moving during the day, immune to all but a few vampiric weaknesses, eventually The Decree caught him, but with all his rage his soul was able to form its own raw divine spark. When Burnsider formed this spark the Lost Deity, from the forming of the cosmos that cursed Miriandis with its vampirism saw an opportunity to come back, by useing Burnsider's ascension as a funnel he sapped a portion of strength out of all the vampires on Miriandis, however what the Lost Deity didn't know was Burnsider's feat of forming a divine spark made many vampires on the face of Miriandis aware of him, and through this latent worship Burnsider was able to empower himself enough to steal the siphon the Lost Deity had created for himself.

Burnsider was only quasi-aware of what happened to him during his ascension regarding the Lost Deity. The gods had just began reaccessing their sparks, many were still on Miriandis, others were returning to the cosmic awareness as Burnsider was entering it, a swirl of divine activity was happening around Burnsider, both increased worship and power from the Lost Deities meddling and from all the ascended gods fighting to protect or destroy Burnsider before he gained full godhood. It was too late for the forces of Reason (the coalition of gods ranging from Kord and Pelor to Mephistopheles) as Burnsider escaped their grasp, became a full god and disappeared back down to Miriandis, to his coffin, which no god could scry on any longer.

Burnsider would later form the Vampiric Pantheon, which would rule from his original crypt when he was first turned, information lost even to the greatest of bards. The Pantheon though powerful and ever reaching was forced to keep its activities off the surface and off the Underdark Highway, however in those shadowy places where The Decree couldnt find them, the Pantheon would grow very powerful even into the third age.

*Note* This is the history that those who worship this pantheon teach, it may or may not be factual.

Clerics of Burnsider go through rituals of burning by fire and by sun, each week they are required to take at least half their total HP in damage from fire or light sources or lose access to their divine spells. The clerics of Burnsider are often taught how to use magic devices from their risen followers and may take Use Magic Device as a class skill.

Some sample prayers are: War cry "Burn in his name!", Comparative "Ashes and Cinders of the fire like rays of the sun.", Farewell "May the sun always be on your back."

The Clerics of Burnsider when initiating an acolyte to full Cleric will strip them of their belongings and clothes, have eight members make eight melee attacks with lit torches, then say a prayer, repeat this once more then the initiate burns an article of clothing they own. The clerics also have a rite of passing which involves finding a member of which ever mortal family that killed the follower of Burnsider, unless by The Decree or non-mortal influence, turning them into a vampire, and leaving them in the morning sun at their home for their family to see, this is less of a rite and more of a preferred way of revenge.

The Clerics of Burnsider are all vampires, non vampires are turned and if by chance a non vampire does begin to worship Burnsider truthfully he will usually dispatch vampires to turn the worshiper. The clergy always wear black robes made of light cloths, they may or may not have armor on underneath, the robes are reversible with the stitching inlaid, one side has a large Burnsider holy symbol, the other is tattered in appearance. These cleric robes of Burnsider offer a +2 bonus to disguise.

The Temples of Burnsider are usually towers, with 4 floors and a basement level. Occasionally the towers will be able to teleport, the controls and designs of all the towers are the exact same but with different walls and doors, so incorporeal creatures can easily move from room to room in any tower without having to learn new layouts. The first floor is an entry way, carpets and tapestries, the second floor is usually walled off completely with no doors and consists of coffins stacked on top of each other, the third floor is the dining area where slaves are brought to a communal table which has grooves for the blood to travel along, each vampire, up to eight, sit around the place a piece of meat in the groove, and begin to feed.

Burnsider stands as an imposing seven foot tall human with very fair pale, almost bleached, skin and a blinding white hair that hangs to his mid back in a pony tail. Burnsider usually wears a suit of brown studded leather armor that appears dry and seems to crack as he walks leaving behind a trail of dry leather that disappear within moments. He also carries a Longspear and two Spears on his back, he has yet to ever use them in combat, once Ali Charum had influenced Zed to question Burnsider's vampiric heritage as a Pure House (First Age) vampire, Burnsider drew his Longspear, Zed immediately realized he had been tricked by Ali Charum and the fight never happened. He walks slowly, speaks slowly, but he always has a smirk, hiding his true agility and cunning, when pressed Burnsider can outrun most hunter gods and has outwitted even Baccob. He is not above fleeing and encourages his kind to do so as it infuriates corporeal mortals so delightfully.