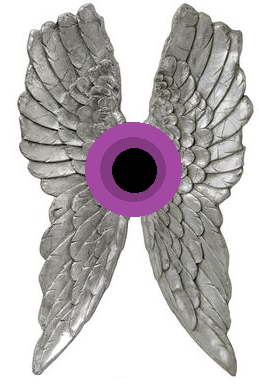 Wings bound by The Void

Brielle is an angelic entity that resides in The Void, with an intense passion for creation. Her power comes from her intimate connection to Kurma and mastery of The Void, allowing her to access all dimensions at any point in their many timelines. She is a patient force of nature, capable of raising cities in a single night and willing to build them brick by brick over centuries.

Brielle's physical form exists only in The Void, as she was made and is completely suffused with its energy. She has the figure of an enormous statue of a woman, carved out of limestone and embedded with hot coals. She also has eight arms and two silver wings. Flying around her are swarms of ribbons and banners of many colors and sizes, and behind her is an enormous golden halo, with six sharpened points pointing inwards.

When she sends a part of his being into another dimension or plane, Brielle will take the form of a young Foreclaimer woman or girl, with glowing white lines and a power crystal in her left eye. If the crystal in somehow removed (which would be very difficult) she will lose her divine powers in that realm, and won't be able to return or connect to The Void until it is returned[1]. She is often seen in forests or metropolises, where life and creativity are thriving, and she rarely stays in one spot for very long.

Brielle is part of The Greater Host, and leads her own sect of the Lesser Host, known as The Riphts. She is occasionally given assignments by Kurma, but she is more likely to go around making random things or creature.

Brielle leads the Riphts, the most mischievous sect of the Lesser Host, and is also known to use parrots and children as her messengers. Many others follow her, as her thirst for creation knows no borders, nor races, nor alighnments, nor creeds. Where there is nothing, there will be something. To follow her is to follow the stars; seemingly constant yet infinitely changing.