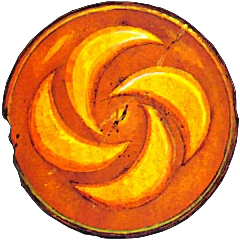 This medallion appears as a golden disc about six inches in diameter, with a swirling design engraved on its surface.

While it is on your person, you can activate the bombos medallion by using an action to swing a melee weapon in a circle around you, and speak the command word. In doing so, you cast the bombos spell (DC 19). The effect lasts for its full duration without requiring concentration, and you cannot choose to end this spell prematurely.

Once you cast this spell, the medallion normally cannot be activated again until the next dawn. A creature can touch the medallion and use its action to expend a 9th-level spell slot, which will replenish the medallion's charge early.