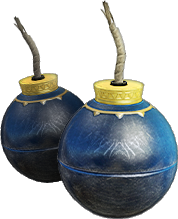 A typical bomb in Hyrule is spherical, between 6 and 12 inches in diameter, and usually a black or blue color. It automatically lights when it is pulled from its satchel, but requires two hands to throw accurately. A Hyrulean bomb is built from a material other than gunpowder. Its explosion creates great blunt force and noise, but little flame or heat.

Throwing one of these bombs is treated as a ranged weapon attack with a range of 20/60 feet. Instead of an attack roll, it requires a Dexterity saving throw from the target and all targets within 5 feet of it. The DC equals 8 + your Strength or Dexterity modifier. If you are proficient in bombs, you can add your proficiency modifier to this DC. If you would have disadvantage on an attack roll with a bomb, any target has advantage on its saving throw. On a failed save, a target suffers 10 (3d6) thunder damage from the blast.

Instead of throwing a Hyrulean bomb to detonate immediately, you can use an action to set or roll it anywhere within 20 feet. If you do so, the bomb explodes at the start of your next turn, and you do not add an ability modifier to the bomb's DC.

The damage a Hyrulean bomb inflicts to objects and structures is doubled.