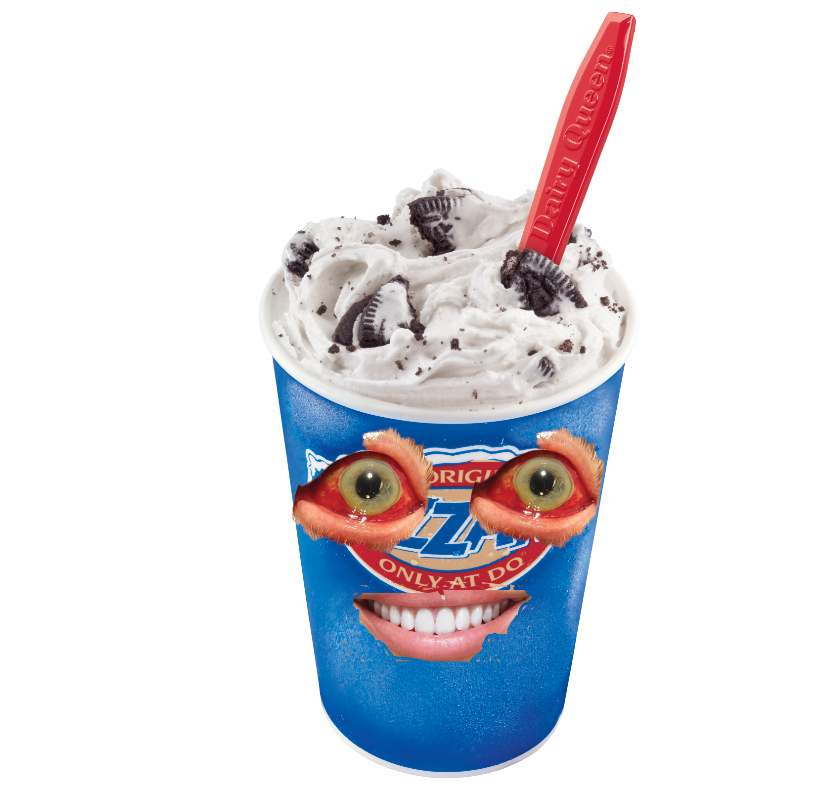 I've only seen such a visage in my worst nightmares. However, the day I stared upon the bloodshot eyes of that frozen freak. . . I'm surprised it wasn't my last!

Blizzard men resemble large ice cream treats of various flavor. They have large bloodshot eyes and a humanoid mouth. The have no limbs, but seem to be able to form tentacles made from ice cream whenever they need to lift something.

These horrific creatures began to appear in the nightmares of madmen shortly after the spell plague. No one knows their origin or what they truly are. All that is known is that binding them to this mortal plain, spelled disaster for numerous kingdoms and empires. Dark rituals were cooked up by many mad warlocks in order to bring the blizzard men from the minds of the mad and into the physical world. Since than, many of them have been roaming the land leaving death and destruction where ever they may tread.

Blizzard men are often arrogant, seeing all other life as worthless. They will also often cause others pain and suffering just for a good laugh. Blizzard men are naturally sadistic monsters, but like all life, they are able to gain compassion with hard work and effort.

Blizzard men are born without names, so they often just adopt the names of their victims.

Nightmarish horrors that resemble tasty frozen treats. Do not let their delicious appearance fool you however!
Ability Score Increase. Your Intelligence score increases by 2 and your Constitution score increases by 1.
Age. You are ageless, time means little to a god such as yourself.
Alignment. Blizzard men are almost all born chaotic evil. This can be changed, it is just extremely rare.
Size. Your size is Medium
Speed. Your base walking speed is 30 feet.
Darkvision. You can see in dim light within 60 feet of you as if it were bright light, and in darkness as if it were dim light. You can't discern color in darkness, only shades of gray.
Cold and Cruel. As a creature made from ice cream, and also as a nightmarish hellspawn determined on destroying everything in your path, you are resistant to cold damage and psychic damage. However, as ice cream, you can easily melt, in turn you are vulnerable to fire damage.
Living in Infamy. You don't scare or fall for follies easily due to how you are wired in death. You have advantage on intimidation rolls.
Take a Bite!. As a tasty snack, twice per day, you are able to summon a giant spoon and take a bite of your frosty head. This heals 2d4.
Languages. You can speak, read and write Common. As well as Deep Speech and another language of your choice.