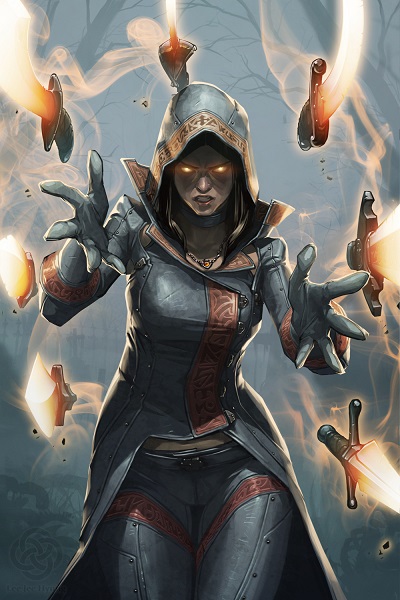 Blade Saints are the pinnacle of knowing their weapon as an extension of themselves. Through intense training of both body and spirit, the Blade Saint is able to truly use their life force to summon weapons made of their manifested souls.

Blade Saints are the peak of weapon mastery, and use a variety of tactics, from complex flank and combat maneuver techniques to the simple "hit it 'til it's dead" approach.

Abilities: Wisdom to enhance your Blade Skills, Strength to crush your enemies, and Dexterity if you don't want to get hit.

Races: Any creature that can reach this level of combat enlightenment may be a Blade Saint.

The Blade Saint utilizes their own life force to summon weapons of great power to take into battle. All of the following are class features of the Blade Saint.

**CLASS IS BEING WORKED ON CURRENTLY, THINGS ARE NOT FINISHED**

Weapon and Armor Proficiency: Blade Saints are proficient with all weapons from two selected melee weapon groups, which cannot be changed afterwards. They are also proficient with light armor and shields (except tower shields).

Bonus Feat: At 1st level, a Blade Saint may select either Combat Reflexes or Deflect Arrows. At level 6 he may choose Mobility or Reflex Set. At level 11 he may choose Greater Critical or Unerring Weapon.

Blessed Harmony (EX): At 2nd Level, a Blade Saint adds their Wisdom Modifier to their AC. This bonus to AC apply even against touch attacks or when the Blade Saint is flat-footed. He loses this bonus when he is immobilized or helpless, or when he wears medium armor or carries a medium or heavy load.

Experienced Strike (EX): At 3rd level, a Blade Saint adds his Wisdom Modifier to damage rolls from his spirit weapons.

Seasoned Warrior (EX): Beginning at 4th Level, a Blade Saint may replace his Constitution modifier with his Wisdom Modifier when gaining Hit Dice.

Pure Body, Pure Soul (EX): At 5th level, a Blade Saint gains immunity to all diseases, excluding supernatural and magical diseases. A Blade Saint has a +2 bonus to resist spells or spell-like abilities that spread diseases or poisons.

Saintly Grace (SU): At 8th level, a Blade Saint gains a protective aura of divine energy, granting Fast Healing 1. This Fast Healing increases to +2 at 12th level, to +3 at 16th level, and finally to +4 at 20th level.

Spirit Blade 1: The path to enlightenment begins with the ability to make form of a spirit blade. As a swift action, the Blade Saint summons any weapon he is proficient with, excluding ranged weapons. This weapon can be dismissed as a free action. This blade is formed from the Blade Saint's own life force, and any damage done to the weapon is dealt to the user. A spirit blade is never truly disarmed, but any time it is not held by its respective summoner, the weapon dissipates and the Blade Saint takes a temporary -1 to Constitution as his body reels from the loss of self. A Spirit Blade deals half damage to objects and other non organic items.

Spirit Blade 3: An additional weapon may be summoned. This weapon can be used as any attack in a full attack action, or the Blade Saint may choose to make an extra attack with this weapon at his highest base attack bonus, with a -2 penalty on all attacks. This second does not need to be wielded, and instead can function orbiting the summoning Blade Saint.

Spirit Blade 4: Your second weapon can be moved by the Blade Saint up to 5 feet away from him as a swift action, up to a maximum of 10 feet away. This spirit blade threatens up to its reach as normal, allowing a Blade Saint to perform attacks of opportunity and even flank opponents. If the Blade Saint moves during his turn, the spirit blade moves in tandem, keeping its distance to its summoner.

Spirit Blade 5: A Blade Saint learns to use his discipline in order to take on multiple foes without handicap. When two weapons are summoned, and the second weapon orbits the Spirit Blade, he cannot be flanked. This weapon can also be used to parry attacks. When this orbiting weapon is not used to make an extra attack in the round, the Blade Saint may roll an attack as an immediate action when an attack succeeds against you. If this attack roll is higher than the enemy's, roll damage for the spirit weapon and negate that much from the attack's damage. This parry counts towards a Blade Saint's attacks of opportunity each round.

Blade Skill (SP): Manipulate you weapon(s) to perform extraordinary feats. You have a pool of your life ki, with a number of points equal to 3 + Wisdom modifier per day, plus 2 more every level. You cannot spend points greater than your Wisdom modifier on any one attack. A Blade Saint with no more points becomes exhausted until they are replenished.

Hallowed Blade: Starting at 2nd level, a Blade Saint can use life ki points to enhance his weapon with reinforced power. For every 2 points spent this way, the spirit blade gains a +1 enhancement to attack and damage rolls for each attack made until the start of his next turn. This enhancement bonus cannot exceed +5.

Blade Ruination: At 6th level, a Blade Saint can focus to take down as many enemies as possible in one swift strike. For 5 life ki, the Blade Saint forgoes all attacks allowed from his base attack bonus to make one attack on all enemies he threatens, as the Whirlwind Attack feat. For an additional 2 life ki, the spirit blade's reach extends by 5 feet.

Ethereal Blade: At 14th level, a Blade Saint's force of will passes through even the mightiest defenses. For 3 life ki, all attacks made with the Blade Saint's spirit blade during his turn go through the opponent's armor, striking his touch AC.

Blade Storm: Starting at the 18th level, Blade Saint's may use any number of blade skill points to summon that many additional weapons for a powerful attack. Each weapon provides an extra 1d6 damage on the next attack. The Blade Saint need not use all extra summoned blades from this skill in the same round, and may spread them out over the course of 1 minute, at which point they dissipate.