Note that certain columns are omitted. Races larger than medium rarely concern themselves with making such intricate machines for warfare. Most bazookas are medium-sized, while some, especially those crafted by gnome engineers, are small-sized. 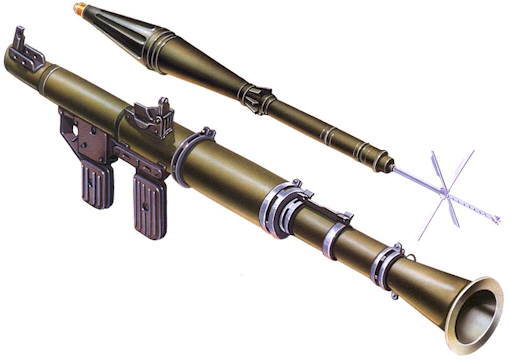 A bazooka is a portable rocket launcher. It consists of a tube-like shaft that directs the projectile's thrust. The damage in the columns above pertains to the projectile itself on a direct hit. This damage is considered adamantine for the purpose of bypassing damage reduction. A bazooka is always a masterwork weapon. Masterwork costs are not included in the table above.

Special: A rocket explodes on impact. Concussive damage equal to double the rocket's base damage is dealt to anything within 10 feet. Anything within 10 to 20 feet is dealt half concussive damage. Any creature within the explosion can make a DC 13 Reflex saving throw for half damage (within 10 feet) or for no damage (within 10 to 20 feet). 'Concussive' damage is typeless and is not reduced by any energy resistance.

Attacking with a Bazooka: When using a bazooka against a land-bound opponent, you may take a -4 penalty to your attack in order to make a called shot against that opponent. If you do, you target the ground at your opponent's feet. If you miss the opponent, the rocket explodes when hitting the ground and the blast will still be centered upon the opponent, although he is dealt no projectile damage, and is entitled to a saving throw for half concussive damage as normal. If you neglect to make this called shot and you miss your opponent, the rocket will simply fly on past the target and miss altogether.

Firing a bazooka in a cramped or enclosed space does not require an attack roll as long as the surface in question is within the bazooka's range (100 ft.). Firing in the general direction of a surface deals concussive damage to any creature within range of the blast.

The ideal way of attacking with a bazooka is in either a crouched or prone position (and from behind cover). To ready to fire a bazooka in this way is a move action and provokes an attack of opportunity. Firing a bazooka unreadied incurs a -2 penalty to the attack roll. This penalty increases to -6 if the shooter has moved more than 5 feet during the round of firing.

Reloading a Bazooka: To reload a bazooka, you slide a new rocket into the firing tube and click it in place. Reloading a bazooka requires a full-round action, but you may reload a bazooka whilst moving up to your land speed. It is possible to man a bazooka with two people, one being the shooter and the other the loader. In this case, the shooter fires the weapon and the loader reloads it during their respective turns, allowing the weapon to be fired each round.