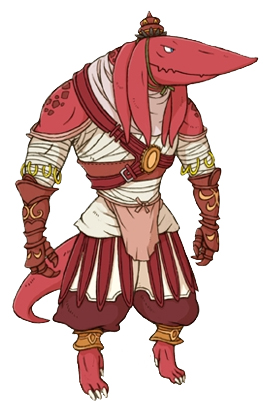 Bangaa, in terms of mentality, are almost identical to humans, despite the fact that they diverge significantly when it comes to appearance. Due to their coldblooded nature, Bangaa are slow to anger, but will fly off the wall if called 'lizards,' which they consider to be a derogatory term. Bangaa always speak with a pronounced hiss, drawing out any word that ends with the letter 'S.' (e.g., rats becomes ratsss...)

The Bangaa (singular and plural) are a reptilian race somewhat akin to lizardmen, though they disdain being compared to each other. The average height of a Bangaa is between 5'06"ft and 6'06"ft tall, and weigh between 150 and 250 lbs. A Bangaa has a long beak-like snout full of serrated teeth, two fingers and a thumb on each hand, four floppy, almost dog-like ears, and a tail which is about one-third the height of the body. (the tail's measurement is separate from the height. The average length of the tail is 3ft.) Bangaa come in four different scale colors: red (50%), black (25%), brown (12.5%) and green (12.5%). Until they actually start talking, it is nearly impossible for an unfamiliar human to tell male and female Bangaa apart (for the Bangaa of course, the differences are obvious). Bangaa often take classes based on physical combat, and can live for about twice as long as the average human. Finally, Bangaa legs, in spite of their seemingly flimsy appearance, are incredibly strong. Their jumping capabilities are never to be doubted. Also their eyesight is very poor. Most rely on smell to guide themselves around and even sport blindfolds as fashion statements.

Bangaa tend to get along well with humans, due to the above similarities. If the two races share a settlement, then Bangaa citizens will be treated as regular people and not some frightening, alien species. They tend to share the same social status and professions with humans, but there is a very slight amount of discrimination between the two (for instance, a Bangaa can become a paladin or a commander in the military, but will never be in a position of serious power, be it political or military).

Bangaa respect dwarves and half-orcs for their strength, but tend to be somewhat savage when around the latter. Bangaa treat lizardmen with open scorn. They feel that the lizardmen are less intelligent than them, and feel greatly insulted whenever someone calls them 'lizards,' as they see this as a comparison to something vile.

Bangaa can be of any alignment, although they lean towards lawful neutral.

Bangaa typically share their lands with humans, but if they live in a distinct society, they will live in warm or temperate environments. Exactly where doesn't matter--just as long as it's warm.

Bangaa tend to worship gods of order, strength, valor and (occasionally) war. A perfect example of deities they worship would be Hieroneous and Hextor. Also, they often choose to worship dragon gods, such as Bahamut or Tiamat.

Bangaa speak Common and can understand Draconic. They rarely use their natural language of Hssiss, unless they live in communities comprised solely of Bangaa. Hssiss uses the Draconic alphabet.