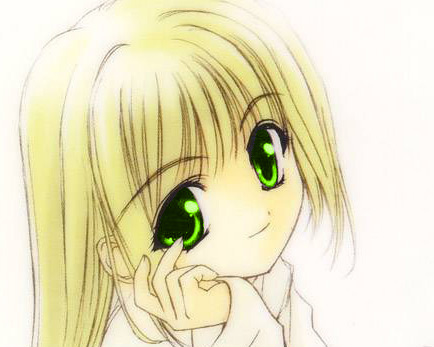 Azure when she appears to mortals

Azure is a beautiful deity who often takes the form of a young woman around 18 to 20. She truly loves all good people and has often mothered young half-celestials over the years with some of her most devoted clerics. She is a passionate deity with a chaotic side to rival that of a stereotypical red-head, even though most of the time she appears blonde.

Azure encourages love and passion among her followers, although lust is often seen as a sin, Azure does not care, and even supports her cleric's and followers passionate relationships. There is one thing she does not approve of however and that is not taking care of the result children. She often hires inevitables to teach those who wrong their young ones through abandonment a lesson.

Azure's temples are not rare, although they are often small then those of Pelor. She and Pelor get along very well, and some articles in ancient lore even suggest that they once had a relationship. Pelor's followers often debate with Azure about whether or choatic nature creates greater good, or whether the Neutral Good alignment of Pelor is better. These debates never turn into actual fights however and are almost purely philosophical.

One deity of the evil ones that Azure never gets along with however is Asmodeus. Azure rules the exact opposite of his nine hells and these two's clergies are often at war. Some say that Azure once even loved Asmodeus at one point in time, but couldn't handle his lawful nature, which made him turn evil when she left him. However these are rumors that only the most knowledgeable of religion or of bardic knowledge can find out (DC 60 and 80 respectively). It may sound almost impossible but Azure hates Asmodeus more than Pelor hates Nerull.

Azure's Plane is called the nine heavens. It is similar to the nine hells, except each part of the planes is ruled over by a great half-titan creature. Azure gave the titan blood to her most devoted followers and summoned them to her plane where they ruled over as miniature deities.

1st Heaven: Ruled over by the mighty Half-titan Nymph Sonja. The 1st level of the heavens is a temperate forest, with large areas of trees and many pools and waterfalls. Any non-good creatures who enter this plane are attacked by mighty Treants who have been powered with special magic to give them barbaric power. Sonja is often found by a waterfall petting her pet green dragon (who is also of good alignment).

2nd Heaven: The heavens of flame is the closest thing to the nine hells in existence in the heavens. Ruled over by the mighty Elven Sorcerer Heather (who is also a half-titan). Heather and her mighty fire elementals, brass dragons, and half-dragons, attack anyone who managed to push past the 1st Heaven who is non-good. Few past through the 1st Heaven without dying, and no one has ever passed the second without Azure's approval.

3rd Heaven: The heavens of water is a interesting plane, in which it always rains but never floods. The explanation for this is that the water drains though the soil as mist and lowers the temperate of the 2nd heaven and waters the 1st Heaven. It is ruled over by the Half-titan human Rebecca. Who uses her powerful wizard spells and defensive magic to aid her water elementals in battle, her pet white dragons are also a real pain (literally) to evil creatures to enter her domain, however no one to any mortal knowledge has ever entered without Azure's approval.

4th Heaven: The heavens of lightning as they are called, for the quick wit and mind of the half-titan halfling rogue, Jessica. She is known as the "trainer" and is the one who creates spells and magic items for Azure. She also is in charge of training new wizards who worship Azure and who are worthy of passing through the first 3 heavens. To this date there has only been one mortal who has been found worthy to train under Jessica. Jessica attacks her enemies with mighty Blue dragons and an army of Iron Golems and Sheild Guardians.

5th Heaven: The heavens of earth consist of mighty mountains and are ruled over by the Goliath Half-titan Barbra. She is the trainer of new barbarians and fighters who are to serve under Azure. Her rages are legendary, and her powerful army of Earth Elementals, Giants, and Red Dragons are a sight to behold for any good person who is not currently being killed by them.

6th Heaven: The heavenly skies consists of mighty air ships and is ruled over by the mighty Half-titan Harpy Tasha. Anyone who falls off a ship in the 6th Heaven falls to the 5th Heaven and takes 50d6 lethal damage without any aid. However it is not possible to fly up to the 6th Heaven from the 5th Heaven because of powerful winds as strong and tornadoes that separates them. Tasha is the trainer of new bards and attacks with words and is so persuasive she can create the effect of mass suggestion at will. Anyone who enters without Azure's approval is met with mighty Silver Dragons and powerful Air Elementals.

7th Heaven: The true heaven of light is ruled over by a mighty true Elder Titan by the name of Selene. Her mighty army of titans and powerful dragons of Silver and Gold, are a sight that some say have the power to destroy entire planes. However Selene has never had to actually enter battle thanks to the mighty defensive power of the lower Heavens. She is the trainer of clerics who are seeking to train under Azure herself. However only the strongest clerics are even powerful enough to create the energy that is required to open the door outside of the 7th Heaven (requires a turning/rebuking check of 80).

8th Heaven: The 8th Heaven is a very strange one, that is filled with strange illusions and fears that scare away those who have reached here. Only those pure of heart and of true good, can find the divine guidance they need to go through the lands of mist. The Lands of Mist is ruled over by the human half-titan Daiki. Who has powerful magic from his titan blood as well as his Divine Ranks given to him from Azure. Some legends say Daiki is Azure's husband, when in reality they're just "friends with benefits" as Azure would put it. Daiki has a divine rank of 5, and he is the only one who has actually met Azure and seen her in her true home.

9th Heaven: In the ninth heaven the traveler will find Azure herself. No one except for Daiki has passed through all of the Heavens and met Azure.