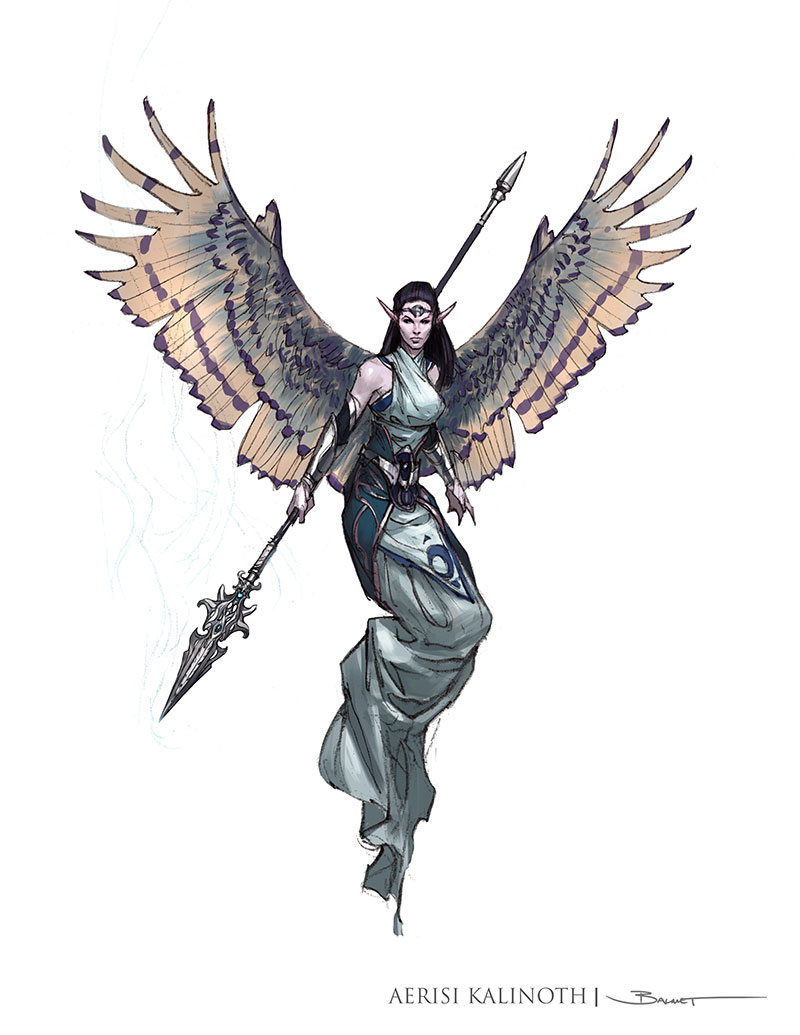 Aerisi Kalinoth by Balanet
"As if the elves weren't close enough to the angels of the heavens before, beautiful beings of such perfection and grace. It is the Avariel that I speak of, elves of the sky and that sour through the heavens with great wings of both power and speed. What a privilege it was to be allowed pass through their sacred lands." - David Rocksalt, Scholar of Candlekeep

Avariel are more delicate than their earth-bound cousins, with hollow bones to aid their flight, toned skin from their time spent in the skies and slightly larger eyes that vary largely in both color and tone. Most notable of all of the avariel's physical characteristics are their wings, broad and feathered they can span up to 10 foot when fully extended. The coloring of such wings are usually speckled, black, brown, white or in some variety of the former, however, rare few have ever had wings of pure white.

The winged elves or sky elves, known as avariel by other elven races, were originally a large faction of elves named the Astald who took it upon themselves to make the world a more peaceful place for their elven brothers and sisters. Moving from region to region they fought war after war, banishing the dragons from the sky control of the skies, assisting in the driving of the Drow to the Underdark, the cursing and then culling of the Fomorians and finally the halting of a great age of darkness from the Lich King Ner'zhul. After a thousand years of fighting the Astald, for their service to the elven kind were granted the gift of flight from elven god Aerdrie Faenyathe and welcomed them into her heavenly realm. Not one of the Astald were seen until the anniversary of their ascension to the celestial plane, exactly 1,000 years later, the winged elves now called the Avariel returned once more and in numbers, flew through the sky like a great swarm into the world once again.

Dwarves. "Dwarves are dull, clumsy oafs but what they lack in humor, sophistication, and manners, they make up for in valor. Even as an elf I will admit, their best smiths produce art that approaches elven quality. We avariel who inhabit the sky resound with this strongly due to the now further opposing nature of their domain to ours."

Gnomes. "Gnomes are easier to get along with, and despite our contrasting domains, their wisdom and our common usage of magic make for a good conversation for us more scholarly avariel's."

Orcs. "Orcs are a vile and disgusting species, if we were not called back to the heavens of our God we would have slaughtered them next, along with their filthy spawn half-orcs."

Elves "All those of elven blood are friends to me. Though the banishing of the drow was necessary at the time I believe that one day we will unite all elves together in unity regardless of the past and me and my kin would go to the lengths of even slaying a deity to achieve such unity."

Humans. "Humans might as well be fiends! They are corrupters of us pure elves whose damage to the wilderness is inexcusable. In addition, their prevention of the creation of full-blooded elves for their selfish desires is abhorrent!"

Half-elf. "Offspring of human and elf are not to be viewed as their human counterparts and can be helped using magic to draw out their elvish blood, however, the refusal of any such gracious offer makes them just ask evil as humans!"

Dragons. "While we understand that dragonborn are not like their draconic parents and as such are forgivable, we avariel are no fan of dragons and their kind for the amount of elven blood they shed before and during the war."

Fey. "All fey of good and neutral intent are our friends, treants, centaurs and great unicorns alike are worthy of our respect."

Halflings. "Halflings are people of simple pleasures, and that is not a quality to scorn. They're good folk, they care for each other as we avariel care for our own kin and for that we value them as companions."

The avariel's society can be easily split into two groups of coexisting people together: Warriors of the sky, the ones who keep the peace in their tribes and keeping the outside world out of their territory, and the scholars of great wisdom and intellect, avariel who bring joy through creation and understanding, that desire only to keep their lands filled with joy.

Young avariel spend their time immersed in both cultures, which typically last over a decade so that no matter what sect they come from, they have a deep understanding and respect of how the other half lives. This has led to warrior avariel to practicing the dyeing of wing tips and other decorative crafts, adorning their feathers and body in paints and dyes.

One of the most prominent characteristics about averiels personalities is the great consideration they have about the effect of their actions and how it would effect their species and elves in general.

Avariel warriors are geared towards fast and powerful, answering to war chiefs who govern avariel society equally with the religious leaders. They live by a code of honor and generally spend their lives defending their race. In combat, these avariel show no mercy, often using ranged attacks from above while dodging their opponents own ranged attacks. One of the key things in their honor system is their view of surrender, believing it to be dishonorable for both themselves as well as their enemies, holding the idea that when a warrior draws blood, it is a promise of battle and fight to keep their way of life alive.

The other side of their society includes avariel scholars, with interests ranging from philosophy and art to craftsmanship and magic. Intellectuals and wise men who work to solve problems through reason and diplomacy as well as insight and wisdom. Many of these avariels are researchers of magic, history and the natural world as well as dedicated to religious services in the worship of the elven deity of the sky and their people, Aerdrie Faenya. At the same time, they work to producing art for the sheer joy of creation and focus on bringing joy and peace to the worlds of others.

Elves of the sky or winged elves.
Ability Score Increase. Your Dexterity score increases by 2 and one other score of your choice increases by 1.
Age. Although elves reach physical maturity at about the same age as humans, the elven understanding of adulthood goes beyond physical growth to encompass worldly experience. For Avariel whose live significantly longer than most elves they typically claim adulthood and an adult name at the exact age of 150 and can live for exactly a millennium, before they pass on the exact moment they were born 1000 years ago.
Alignment. Avariel like their elven brothers love freedom, and no freedom is quite as great as soaring through the skies, as such they lean strongly toward the gentler aspects of chaos. They value and protect others' freedom as well as their own, and they are more often good or neutral. It is within the Avariel culture, to not interact with the world outside their enclaves in their attempt to keep their race as pure, in both bloodline and in culture, as possible.
Size. Avariel range from under 5 to over 6 feet tall and have slender but muscular builds. Your size is Medium.
Speed. Your base walking speed is 30 feet.
Avariel Wings. You have a flying speed of 50 feet. At the end of each of your turns, if you are flying you must descend 60 feet. When you reach 5th level, you do not need to descend. You cannot fly if you are wearing medium or heavy armor.
Darkvision. Accustomed to twilit forests and the night sky, you have superior vision in dark and dim conditions. You can see in dim light within 60 feet of you as if it were bright light, and in darkness as if it were dim light. You can't discern colors in darkness, only shades of grey.
Fey Ancestry. You have advantage on saving throws against being charmed, and magic can’t put you to sleep.
Keen Senses. You have proficiency in the Perception skill.
Trance. Elves don’t need to sleep. Instead, they meditate deeply, remaining semiconscious, for 4 hours a day. (The Common word for such meditation is “trance.”) While meditating, you can dream after a fashion; such dreams are actually mental exercises that have become reflexive through years of practice. After resting in this way, you gain the same benefit that a human does from 8 hours of sleep.
Languages. You can speak, read and write Common, Elven and Celestial

When creating an alraune character, you can use the following table of traits, ideals, bonds and flaws to help flesh out your character. Use this table in addition to or in place of your background's characteristics.