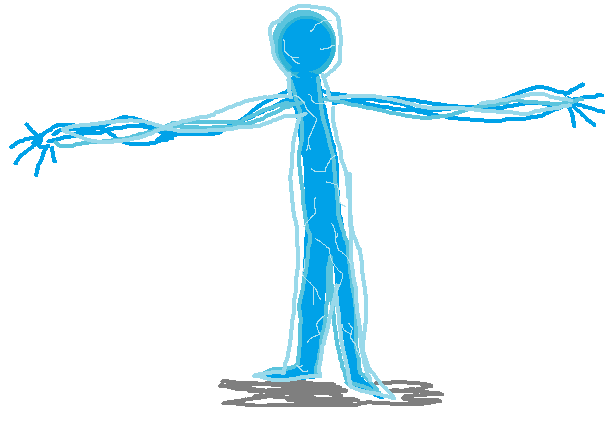 Astral beings are humanoids that are roughly the same as humans. However, they emit a soft blue light from their skin, which is covered with lighter colored veins upon inspection. they lack hair anywhere on their bodies and are not sexually dimorphic, instead being quite homogenous. Their eyes are the same color as the veins, being almost white in the very center. They look spindly in build, with their trademark arms that seem "wiggly." In truth, their arms are less stable in vision, so the form is blurred and seemingly shifting, like when one sees how heat bends light. Their legs are rather long but their arms are longer. Their mouth is the same color as their eyes but it cannot be seen unless they speak. They do not seem to have ears that can be recognized.

Astral being is a blanket term for unformed denizens of the Astral plane. They resemble a very rough, unfinished project by some deity, left to wander in incompletion. They are born when residual astral matter, like dust and particulates, accumulates with a consciousness, often resulting when someone uses a planar shift to enter the Astral plane. An astral being will be created and left behind as a result of this visit. They are commonly regarded as the lowliest, most common thing in the plane. However, due to their generic form, those who saw them saw fit just to call them 'beings,' which is why their name is so bland. Travelers to the Astral plane note that these creatures are often food for larger, more powerful beings.

Despite this bleak picture, however, astral beings have a noted resiliency. They often look like they are lost and act like wandering clouds or cattle. Something must be watching over them in any case because they remain quite populous. This may be due to the fact they are essentially scraps of creation and are like the krill of the Astral plane. There have been recorded interactions with astral beings that spoke to those of the Material, but it often ended in violence. It seems the astral beings, despite being fodder in their own realm, see themselves as superior to those of the Material. One astral being was recorded to have said snidely that they refuse to recognize material beings as authentic equals in existence until anyone could conduct planar shift. This is possibly due to the fact that planar shifts is what creates them.

Astral beings are often sighted in solitude. However, they have been observed to convene with others in large numbers, though no one knows what for. They do not seem to have a hierarchical society, instead, everyone being equal. Some have been known to fight one another, possibly for mating purposes. It is unverified how they conduct coitus or mate since it has never been observed and no autopsy can be conducted since they fade almost immediately if they are killed. Astral beings do have male and female sexes but it is almost impossible to tell them apart, so most people just ask. They do not highlight or seem to care about these distinctions, typically being a very homogenous race that barely distinguishes one from another.

Astral beings are shown to be hostile to material beings and are recorded to value the ability to shift planes, which is often a luxury for those in the Material Plane. Thus, they believe themselves superior. In the Astral plane, however, they are often eaten or killed by other creatures. They do not seem to fear death as a race, instead believing they will be recycled back into a new astral being.

Astral beings commonly speak Auran of the Primordial tongues. Their names are usually quite pleasant sounding.

The krill of the Astral plane
Ability Score Increase. Your Wisdom score increases by 2, and your Constitution score increases by 1.
Age. While they do not visibly age, astral beings can exist for a good 150 years before their form starts falling apart and turns back to astral dust.
Alignment. Astral beings are usually temperate and neutral. When confronted with material beings, they may turn a bit more chaotic.
Size. Astral beings vary widely in height and build like humans, from barely 5 feet to well over 6 feet tall. Your size is Medium.
Speed. Your base walking speed is 30 feet.
Darkvision. You can see in dim light within 60 feet of you as if it were bright light, and in darkness as if it were dim light. You can't discern color in darkness, only shades of gray.
Astral Walker. You walk with grace along trivial material obstacles. You ignore difficult terrain and can go through it as though normal.
Astral Light. Due to your luminescent body, you emit light. In darkness, you can emit a soft glow of pale dim light for up to 10 feet with a bonus action. You can turn off this light with a bonus action as well.
Astral Sight. Astral beings don't actually all know how to plane shift either. But they have eyes that let them see into other planes, which allows them to act like know-it-alls. You have up to 60 feet of sight into the Astral Plane when you are in the Material Realm and vice versa.
Languages. You can speak, read and write in Common and Auran.