Fighting a losing battle a commander stands in awe with his men as a force of divine power cleaves through the armies of the undead as if they were nothing. A humble priest walks the battlefield, striking the fear of God into the demon spawn that hopes to claim the lands of man. A human sprouts the wings of an angel and draws a holy weapon from nothing as he approaches the boastful devil, his smile growing as the devil's falls. Angelic Warriors are a tier above the typical intermediaries gods, holy warriors that stand out as being a cut above the rest of their blessed brothers and sisters, their combat prowess combined with their indomitable faith makes them a feared enemy for any force of evil. Imbued with a greater quality of divine essence from their deity they become comparable to angels. The divinity received by Angelic Warriors turn the blessed champions and holy clerics they once were into heavenly paragons.

A Cut Above The Rest[edit]

Not every divine caster blessed with power from their god can become an Angelic Warrior. Some paladins and clerics in honor of their oath and their deity are called to the adventuring life to protect a temple or city of followers, carrying out their gods' will through steel and prayer. They brave dangers beyond the walls of civilization, smiting evil as they delve deeper into ancient ruin or dusty crypts where the darkness lurks. Few of these divine casters go on to accomplish great feats of man and may reach the pinnacle of their deific power but not receive the blessings of an Angelic Warrior.

The path of an Angelic Warrior is a blessing that marks a mortal as being worthy of an epic holy quest or purpose. It is a blessing that is meant to test the faith and strength of all those that receive it and when fully taken in forge a might paragon of the deity that gave such a blessing. It is this blessing that brands them as indomitable warriors yet dedicated followers with their overwhelming strength only comparable to their selflessness and sense of duty. They are beings in the service of their Lord who bow their heads to no man and whose prayers are found burned into the stars of the night sky and in the withered bodies of heretical monstrosities.

Angelic Warriors must have character and a strong sense of self to stand out to their deity.

The strain put on the body of an Angelic Warrior is great and as such requires a greater degree of fortitude.

In order to make the right decisions in the heat of battle and in morally conflicting situations, Angelic Warriors must possess a natural insight into the world of their deity.

Only Good deities may create and command angels and as such only those of Good alignment may receive this blessing.

- Proficiency in a martial weapon.

Angelic Warriors combat prowess is one of their most established traits and as such you must already be a skilled warrior.

Angelic Warriors must already be skilled casters to be able to manifest the power of their deity.

Only the strongest souls are worthy of such a promotion, and as such you must be of at least 12th level before your soul becomes strong enough to stand up to such a process.

You must have completed a quest, performed some great deed or done something worthy of your deities recognition for them to have given you such a blessing. 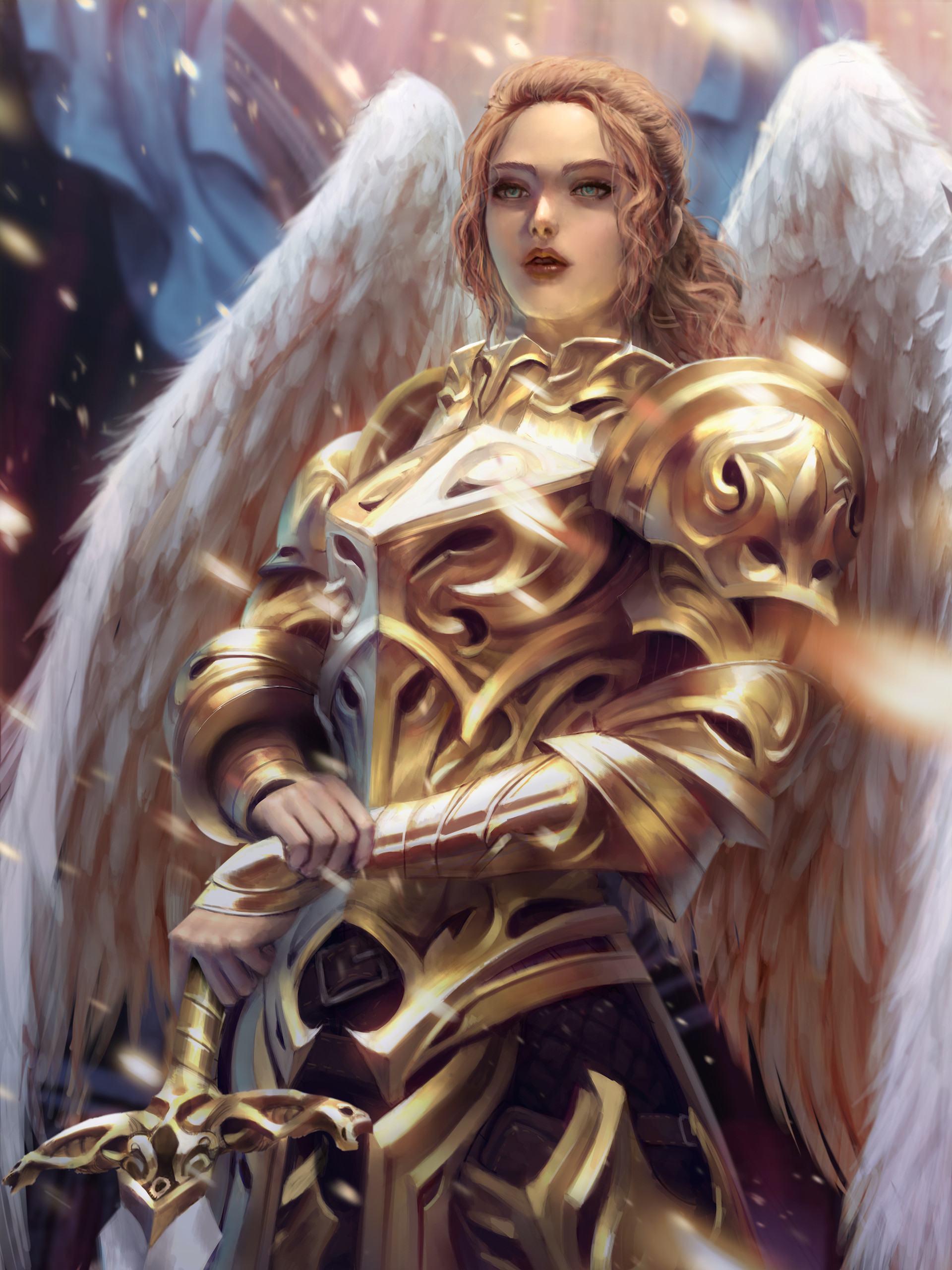 As a Angelic Warrior you gain the following class features.

As part of you starting down the path of an Angelic Warrior your god has whispered a holy ritual to you that creates a sacred bond between you and one weapon. You perform the ritual over the course of 1 hour, which can be done during a short rest. The weapon must be within your reach throughout the ritual, at the conclusion of which you touch the weapon, forging the bond. Once you have bound a weapon to yourself, you cannot be disarmed of that weapon unless you are incapacitated. If it is on the same plane of existence, you can summon that weapon as a bonus action on your turn, causing it to teleport instantly to your hand. The weapon gains +2 on attacks rolls and deals an extra 1d8 radiant damage while wielded by you. As your power grows so does the amount of divinity you can channel through your bonded weapon as seen on the Sacred Bond column on the Angelic Warrior table. If you target is a fiend, undead or aberration you gain an additional +2 to your attack roll.

You've gained a supernatural sense through your attunement to a higher power. You can detect the presence of aberrations, celestials, elementals, fey, fiends, or undead within 30 feet of you, as well as where the creature is located. Similarly, you can sense if there is a place or object within 30 feet of you that has been magically consecrated or desecrated.

Starting at 2nd level, your body and soul start to show to adaptations to their new divine powers. You become immune to being charmed, frightened, possessed, petrified or exhausted. At 4th level, your eyes have adapted to seeing to truths of the world gaining a faintly visible golden circle at the edge of the iris, you now have truesight up to 15ft. At 6th level, the amount of evil you have slain speaks volume to evil in your presence causing them to become stricken with a profound sense of dread. When you roll for initiative, you can force aberrations, fiends, undead as well as evil-aligned creatures that can see you within 90ft of you to make a Wisdom saving throw or become paralyzed in fear for 1 minute. Affected creatures may repeat this save each time they are damaged.

Also at 2nd level, the pure strength of your divine wrath allows you to shrug off attacks that would typically fell most mortals. You gain resistance to bludgeoning, piercing, and slashing damage as well as your greater divinity causes you to gain resistance to radiant and necrotic damage. At 6th level, your wrath is truly a force to be reckoned with, especially when dealing with the evils of the world, your resistance to necrotic damage and non-magical weapons becomes immunity.

Also at 4th level, your insights gained from your supernatural senses are enhanced further. Your Divine Sense increases to a 120ft radius and you can detect the presence of any Evil within range.

At level 5, your combat prowess has reached greater heights allowing you to move your blade with an enhanced degree of ferocity and speed. When you take the attack action, you can make an additional attack.

At level 6, your bonded weapon becomes the bane of all evil. In particular, when you slay creatures such as fiends, beings that are the manifestations of evil gods, dropping them to 0 hit points causes their souls to not reform and are instead instantly destroyed. If the creature is not a fiend but of an evil alignment you can choose to destroy the soul of the creature, however, do so at your own risk, your deity may not agree with your decision. In addition, radiant damage you deal cannot be negated, resisted or neutralized and you become immune to effects that would disconnect you from your deity.

Finally, at 8th level, your increasingly potent doses of divine energy from your deity has finally caused your body and soul to break away from their mortal coil. You gain the following features:

- Your creature type is now celestial, in addition to your other creature types and as such you take on the physical semblance of a celestial causing, your features become brighter, more alive and fuller.

- As long as you are in the good graces of your deity you do not age, are no longer affected by the frailty of old age and no longer require food, drink, or sleep.

- You can speak, read and write any known language as well as telepathically communicate with any creature within 60ft.

- You sprout a large pair of beautiful white wings granting you a flying speed equal to four times your walking speed. These wings are extensions of the soul manifested in the physical realm and as such can be made ethereal, and as such invisible at will.

- You can hear prayers made to your deity within a 1-mile radius and all prayers directed towards you. You can spend a minute focusing on individual prayers to know details and insights about that person, their location, their emotions, the situation they're in or whatever other insights your DM decides you gain. Once per day you may choose to intervene stepping between the plane of your god and the mortal plane to teleport to that prayers source, falling from the sky, appearing in a flash of blinding light or in some other over the top or equally angelic fashion. You may step back between the planes to return to the location you previously were.

Magnificent white wings spring forth from you back, as if they've always been there, your age-old aches and wounds from your many adventures and journeys ease up and a calmness overcomes you, looking into a reflection you see the face of an angel staring back at you. Started you hear the whispers begin to pass by your ears, your allies don't know what whispers you speak of but you know they're there. Whispers giving thanks and praise, the confessions of lowly chambermaid and the daily communal of a king. Whispers asking, begging and crying out for help, a nobles first prayer as he's held hostage and the lulling last words of a soldier on a battlefield. Whispers said in anger, rage and wrath, a paladin breaking his oath screams to the heavens in rage despite his heresy, and a warrior calls on you for power as he defends his homeland from foreign invaders. These are the nearby prayers drawn to you in search of your deity and all those directed at you. The words of your deity echo through your mind to congratulate and inform you of the path that now lies ahead.

A note for DM's and players[edit]

This prestige class was designed with the intent to be played in a high magic, high fantasy and high difficulty settings. As such it may not be suitable for use across most campaigns.