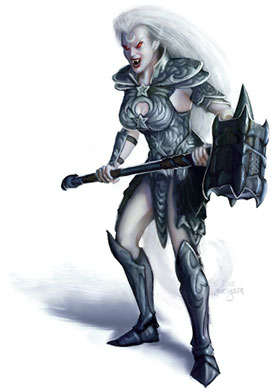 This is a Meyerian Vampire template, based on Stephanie Meyer's Twilight vampires.

This template is basically an advancement of the Newborn Meyerian Vampire template. It cannot be applied directly to any creature.

Increase all current and future hit dice to d12s.

Meyerian Vampires gain +30 ft. to their base land speed.

The base creature's natural armor bonus improves by +10.

A Meyerian Vampire fighting without weapons uses either its slam attack (see above) or its natural weapons (if it has any). If armed with a weapon, it usually uses the weapon as its primary attack along with a slam or other natural weapon as a natural secondary attack.

A Meyerian Vampire retains all the special attacks of the base creature and gains Blood Drain, described below. Saves have a DC of 10 + ½ vampire’s HD + vampire’s Cha modifier unless noted otherwise.

Blood Drain (Ex) A Meyerian Vampire can suck blood from a living victim with its fangs by making a successful grapple check. If it pins the foe, it drains blood, dealing 1d4 points of Constitution drain each round the pin is maintained. On each such successful attack, the Meyerian Vampire gains 5 temporary hit points.

Create Spawn (Su) If the Meyerian Vampire drains the victim’s Constitution score by at least 2 points, but without dropping it to 0, that victim begins the transformation process. During this process, which takes 1d3 days, the victim goes through immense pain as their body changes. After the change is complete, they emerge as a Newborn Meyerian Vampire. However, most Meyerian Vampires are unable to stop draining a victim's blood once it is begun (see Blood Frenzy below).

Meyerian Vampires gain the Alertness, Improved Initiative, Lightning Reflexes, and Stealthy feats if they do not already have them.

Any environment, though usually somewhere with a large human population nearby for feeding.

Often solitary or pair, though trios are known to form as well. Rarely any organization larger than this, Meyerian Vampires find it difficult to get along with each other in large groups for extend periods of time.

Same as base creature +3

Same as base creature +0