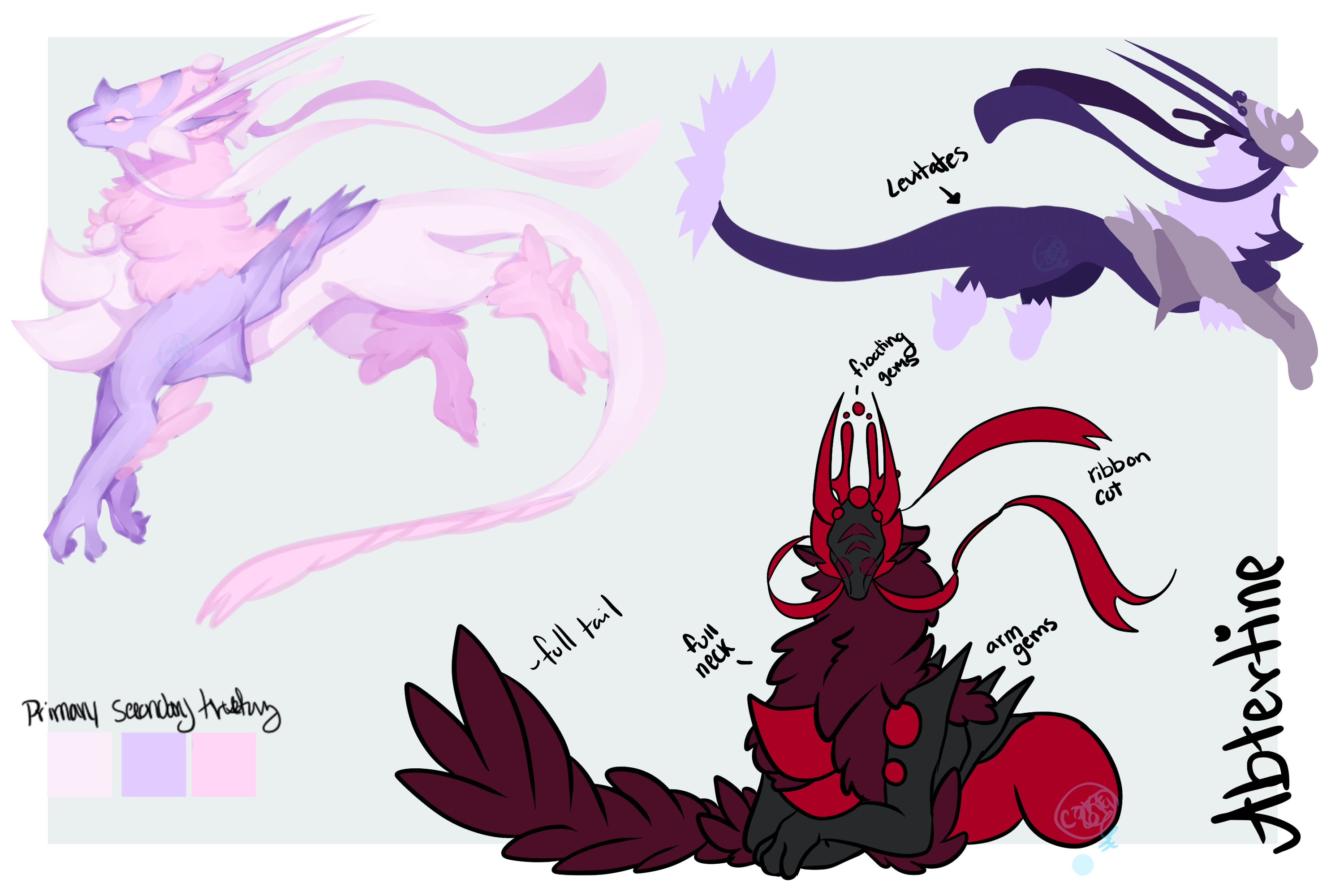 Albertines are eastern dragon with a love for the cold. They don't seem to be related to normal dragons, as they don't hold all the same powers. They have a ghostly appearance, rarely ever having pupils. Long manes that covers their necks, and plates only on their chest, the rest of their body is a smooth scale. They have thick "scarves" that come off their snouts, being as long or longer than their body.

Little is known about the Albertines, they have a connection with the cold winds, and are thought to come from the plane of Frostfell. They move to other planes when the winds show them the way, and once they're there, they tend to stay as they meet new creatures, acting like most silver dragons, finding mortals with short life spans, amusing.

Albertines society back home follows a mutated(Alpha) or non-mutated(omega) pack. They don't live together, yet in the jagged cliffs miles apart, coming together on the coldest day to converse about pack rules, and new boarders. They don't marry, but have life long mates, maybe one or two at a time. Mates are normally picked by the mutated one, and given to the male. Mates don't live together, and don't raise the offspring together, just meet once awhile.

Eastern Dragons, with a love of the cold.
Ability Score Increase. Your Cha score increases by 2 and your Int score increases by 1.
Age. Albertines mature at 100, and live about 2,300 years.
Alignment. Albertines lean more to the chaotic alignments
Size. Albertines are long being about 8 feet in lenght, and they tend to be 8-10 feet tall, your size is large.
Speed. Your base walking speed is 30 feet. You have a flight speed, 35ft per turn.
Darkvision. Accustomed to life in the Frostfall, you have superior vision in dark and dim conditions. You can see in dim light within 60 feet of you as if it were bright light, and in darkness as if it were dim light. You can't discern color in darkness, only shades of gray.
Levitation. You can levitate as a flight speed, you can only levitate up to 60ft. If you go past 60ft, you fall back to the ground as if the feather fall spell was cast on you.
Cold breath. You can use your action to exhale cold blast of wind. When you use your cold breath, each creature in a 15ft cone must make a constitution saving throw. The DC for this saving throw equals 8 + your Constitution modifier + your proficiency bonus. A creature takes 2d6 damage on a failed save, and half as much damage on a successful one. The damage increases to 3d6 at 6th level, 4d6 at 11th level, and 5d6 at 16th level. After you use your breath weapon, you can’t use it again until you complete a short or long rest.
"Scarves". . Unlike most dragons, Albertines have two feelers that are like another set of limbs, yet, they are not the strongest, you can hold items up to 10 pounds, and if you swing a weapon over 3 pounds it's damage is halved.
Humanoid Form. Albertines can change their for at will to one humanoid form given at birth. They can change back and forth, yet an anti-magic field, will force them back into their Draconic form. They still have tails, and horns, seeming like a tiefling with different skin colors, and no pupils. they can still levitate, and still have their scarves.
Natural Armor. With you scales and plating, you have a natural armor of 12, yet in your dragon form you cannot use Armor unless specially made to fit. For all forms and purposes you always count as Draconic.
Languages. You can speak, read, and write Common and Draconic.