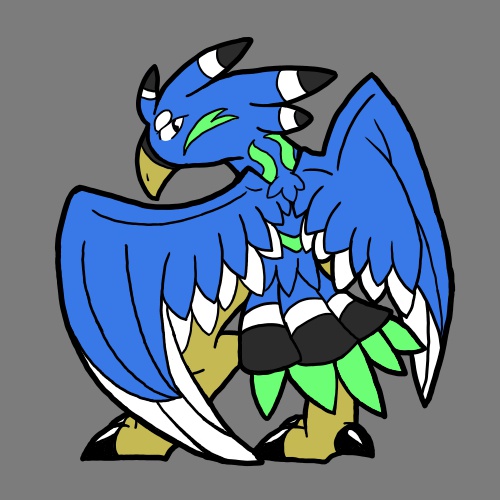 Airrans are borne of the sky, soaring on the breeze and basking in the sun, above the clouds that would block the rays. Little is known of the airrans; they are an insular species, tending to keep to their homes in the mountains and canopies of the large forests. What is known is that they are fiercely loyal to their direct family. Feuds are often fought among their clans over petty and mundane happenings between their youngest members. Many airrans leave their insular life to get away from the toxic family life that often occurs from these feuds. It could also be they are tired of the caste they were born to, and wish to make their own fortune, regardless of their social standings.

Airrans are a people of many appearances, varying from feathered, to furry to scaly. They are not always humanoid, sometimes appearing avian or even a bit dragon-like. Because airran is a blanket term, it makes sense many things may go by this name, yet look wholly different in shape and color.

Airran history is as much a mystery to the outside world as it is to the airrans themselves. Airrans tend to live in the now, and any history that is shared is often folk-lore and legend, or regaling tales of great airran Heroes, whose names have been lost to the sands of time. They are believed to be a race having come from the god of the sky's whimsy, hence the large variance in their physical appearances. Because documenting the population by appearance is a fool's errand, the airrans adopted a caste system which also substitutes as virtual subraces.

Airran society is made up of a caste system, which consists of three main castes; royal, common, and lesser.

The royal caste is the ruling class of airran culture, from the smallest local governing agency, to the Royal family line; they are all of the royal caste. Those in this caste are often much grander looking in appearance, graced with pure gold and silver feathers and accessories as well as impeccable influence.

The common caste, often called the commoner caste, makes up the main working body of artisans and merchants, shop-owners, blacksmiths, tailors and all the common folk. Most, if not all, skilled crafts are pioneered and run by those of this caste. The airrans of this cast resemble normal, common creatures of the air and are not brightly colored usually.

The lowest and last caste is the lesser caste. Those born to the lesser caste are doomed to suffer a life performing the most menial and degrading work available like manual labor, janitorial services, etc. Many of the lesser caste turn to petty thievery, as the jobs open to them pay only a scant wage. Airrans of this caste often have dull colors or even disfigured features.

Airran names are often derived from the Auran, Aarakocra, or Draconic languages, using many harsh consonants that humans might find difficult to pronounce and write.

A few examples, regardless of gender, are as follows:

Umbrella term for flying denizens of the flying cities called "aeries".
Ability Score Increase. Your Dexterity score increases by 1.
Age. An airran reaches adulthood at the age of 5 and have been known to live as long as 110 years.
Alignment. Airrans are as varied as their human counterparts, with differing cultures and ideologies.
Size. Airrans are smaller and thinner than the average human, ranging from 5' to 5'6" tall. They weigh between 90-120 pounds, and their wingspans (their most impressive feature) averages 11 feet. Their size is Medium.
Speed. Your base walking speed is 25 feet. You also have a flying speed of 40 feet.
Wings. To use your flying speed, you can't be wearing medium or heavy armor. In addition, if you take damage while flying, you must succeed a Constitution saving throw, the DC is equal to 10 or half the damage taken, whichever is higher or you fall to the ground prone.
Hawkeye. You can see twice as far as humans in clear weather. You are proficient in the Perception skill.
Languages. You can read, write and speak Common, Draconic, and Auran. Auran is the common language of the aeries, voiced with squawks, chirps and whistles.
Subrace. There are several castes of airrans, as well as a variety of appearances due to the sheer diversity of flying beings on the aeries. There are three main castes which act as subrace categories: royal, common and lesser.

Ability Score Increase. Your Wisdom and Charisma scores each increase by 1.
You Dare Doubt Me. You come from a haughty place above many others in society, granting you quite the convincing tone. You have proficiency in the Persuasion skill.

Ability Score Increase. Your Strength and Constitution scores each increase by 1.
Commoner. Due to your average lifestyle, you have proficiency in one artisan tool or gaming set of your choice.

Ability Score Increase. Your Dexterity and Intelligence scores each increase by 1.
Lesser. You have smaller stature than your common, and royal brethren. You are proficient in the Stealth skill.