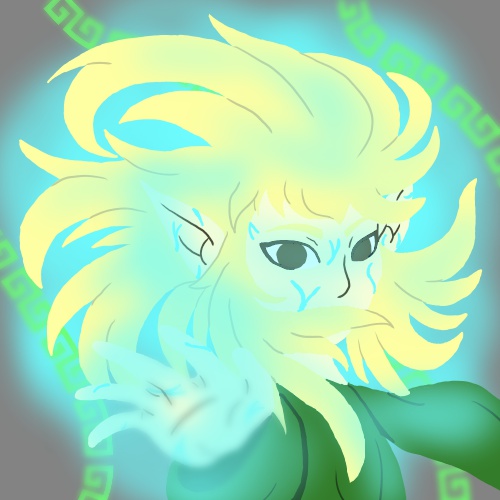 The Aether is everywhere and now, it is inside you.

Aethelves are pale skinned humanoids. They have dark eye colors like brown or black. Brighter eye colors, such as red, blue, or green, are considered rare. Their skin texture is described to be that of human newborns, being very soft and smooth. Aethelves sport teardrop-shaped ears, so like elven ones, but with a larger rounded base. They are the size of regular humans and often have the veins of aether running along their bodies.

Aethelves were a species relative to that of elves before they branched off completely, forming their own race. Their secrets are only just being discovered in the northern edge of the Underchasm, where they are believed to have sequestered their civilization for centuries. Aether, a powerful essence present in magic, was found in large amounts there. Their most significant achievement was fusing the Aether with biological creatures, eventually enhancing their own bodies as well. Their accomplishment allowed for their skin to become softer and their bodies and minds to enlighten.

But this achievement also came to spell their doom. A small rogue faction experimented with the dead and Aether, forming an abomination, only known as the Wilthurian. This creature self-destructed, but not before obliterating all of Aethelves in existence at the time. This creature was the rumored greatest risk while exploring the ruins of Sunderoin, their abandoned underground capital. The capital, Sunderoin, was their largest city, based in the belly of the Underdark. They established a sort of teleportation system that helped with travel between towns and outposts. The Citadel, the city's town hall, was the hub for this system. Their first ruins to be discovered was an outpost that both guarded and acted as an embassy for interactions with the surface.

Aethelves were thought to be extinct. However, the race is now reborn, thanks to an incident that occurred with an expedition team just outside the ruined walls of Sunderoin. Having found the laboratories of the aethelves, the team tried replicating methods from notes they salvaged. The methods and techniques used to manipulate the Aether, were used once again. But this time, instead of another Wilthurian, the team accidentally resurrected the ghosts of aethelves. The undead killed the team and deconstructed them, using their cells to recreate the aethelf civilization before entering with new life into these bodies to walk among the living once more.

Aethelf society was very strict in titles. Their civilization was split into tiers to maintain a balance of the rulers, commoners, and many others. These essential castes were often named with that of minerals since they were surrounded by them underground.

The benitoite composed the noble tier. Red diamonds were rare citizens that are technically less powerful as nobles, but they have the strongest influences, letting them determine the fate of a noble individual or family. they often did dirty work for the benitoite tier. Celestial gems were religious representatives of the commoner's city sectors, as well as general therapy helpers. Commoners were called quartz. Nameless athelves were the forgotten in their society, consisting of orphans and criminals no one wanted to associate with. Aethelves who left their underground often were called emeralds, as they preferred the surface world. Lastly, those of rare eye colors were part of either the blessed or nameless castes. This was based off a calendar established and upheld by the celestial gems which would determine the fortune of these oddities.

Due to their most significant records being destroyed, they have adapted modern elven names, more specifically, drow names, since they are distant ancestors. Emerald tiers adapted wood elf names. But some of the higher tiers have different names, setting themselves apart. Aethelf names are separated by tier rather than by gender. The nameless are, of course, nameless.

A distant relative to the ancestor of elves
Ability Score Increase. Your ability scores depend on your subrace.
Age. The oldest age to be recorded is 2,000 years old. Aethelf longevity is attributed to the Aether abundant in their veins. They mature roughly around 20 years of age.
Alignment. Aethelves are mainly shades of neutral. Having lived in isolation so long from others in the Underdark, they prefer to keep to themselves.
Size. Aethelves have similar builds to humans and are similar in size as well. Your size is Medium.
Speed. Your base walking speed is 30 feet.
Darkvision. You can see in dim light within 60 feet of you as if it were bright light, and in darkness as if it were dim light. You can't discern color in darkness, only shades of gray.
Softest Skin. Your soft skin is addictive to touch and makes you possibly very endearing, as well as helping you with movement. You are proficient in either the Performance or Persuasion skill.
Aether Touched. You are blessed with the magical Aether in your veins regardless of caste. You know one cantrip of your choice from the bard or sorcerer spell list. Your casting modifier for this cantrip is your Charisma.
Aether Run. The Aether in your veins allows you to move with a burst of speed. When you move on your turn in combat, you can double your speed until the end of the turn. Once you use this trait, you can't use it again until you move 0 feet on one of your turns.
Languages. You can speak, read, and write Common and Elvish.
Subrace. Choose from the Benitoite, Red Diamond, Celestial Gem, and Quarts subraces.

The highest tier of the Aethelf. They provide day to day decisions for the aethelf society.

Ability Score Increase. Your Charisma score increases by 2
Commanding Aura. You are not to be ordered around or intimidated. You have advantage on saving throws against being frightened.

Being part of the Aether can bring you closer to your deities. This subrace includes the blessed tier of aethelves.

Ability Score Increase. Your Wisdom score increases by 2.
Piety. You are proficient in the Religion skill.

The most common type of aethelf. They do not have special functions and also encapsulate the emerald, quartz and nameless groups.

Ability Score Increase. Your Constitution score increases by 2.
Common Citizen. You are a common person with a vocation probably. You are proficient in one artisan tool, gaming set or instrument of your choice.

You are perfect for infiltrating, assassinating, stealing, running and other things requiring stealth.

Ability Score Increase. Your Dexterity score increases by 2.
Assassin. You are flexible and light of foot. You are proficient in the Stealth skill.