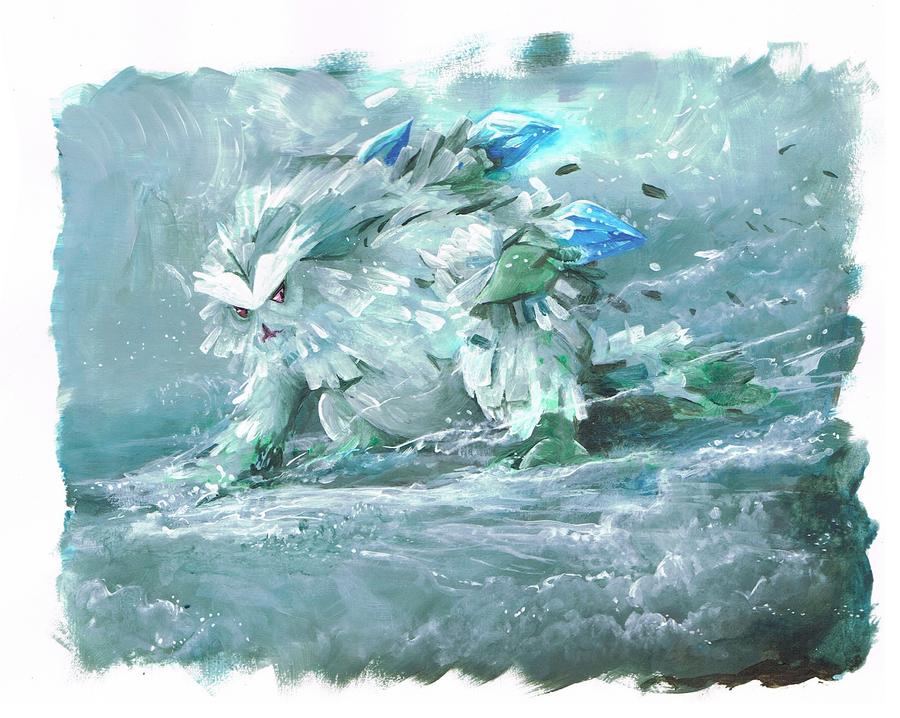 Abomasnow are tall, hairy humanoids bearing a faint resemblance to evergreen trees. Their tall, wide, stocky bodies are covered from head to toe with thick, rough, fur. Across most of their bodies, the fur is white as snow, but on the hands, the feet, the cedar-like tail extending a yard behind their bodies, and the tree-like growths on their backs, the fur is a deep green color. Occasionally, the green fur will be teal instead. Their faces are fairly flat, possessing only a mouth concealed partially behind hair extending down from the upper lip; deep purple, green, or yellow eyes; and a prominent brow ridge terminating in large tufts of fur resembling the feathers of certain owl species.

Abomasnow have a larval form, known as a snover, who much more closely resemble pine trees than the abomasnow. Snover stand much shorter than their fully-grown counterparts, coming only up to around 3 feet in height. They still bear many of the characteristics of the abomasnow, such as the green cedar-like tail and green forearms; however, their heads look like the conical tops of pine trees; their lower bodies and feet are a light brown color, separated into smaller zig-zagging sections; and their faces, reduced to a single pair of eyes, lie below the pine-tree formation that crowns their heads.

Abomasnow originated in the cold, high places of the earth, dwelling in the caves and the snow of the mountains. The abomasnow are a lonely race and have had little contact or relations with other humanoid species.

Abomasnow are largely solitary creatures, though small tribes of abomasnow and snover consisting of up to a dozen individuals have been known to form. Abomasnow heed and revere the primal forces of nature, largely worshiping them and the gods directly behind them. Their relations with other humanoid races have been sparse but mostly peaceful, as the abomasnow are not prone to violence.

Abomasnow derive their names from the wild forces of their alpine homes. An abomasnow's name may represent the babbling of a creek flowing down from a mountain spring, or the soft falling of snow in the dead of winter.

A race of powerful pine tree-like humanoids.
Ability Score Increase. Your Strength, Constitution, and Wisdom scores each increase by 1.
Age. Abomasnow age very slowly, growing out of their larval forms after approximately 40 years. Their lifespans rival those of the trees, lasting up to 500 years.
Alignment. Abomasnow, being reclusive creatures of the wild, tend towards chaotic alignments. They don't generally care about the cosmic battle of good and evil.
Size. Abomasnow dwarf most other humanoids, ranging from just over 7 feet to just under 9 feet tall and weighing between 250 and 500 pounds. Your size is Medium.
Speed. Your base walking speed is 30 feet.
Guardian of Winter. You know the ray of frost cantrip. When you reach 3rd level, you can cast the entangle spell once with this trait and regain the ability do so when you finish a long rest. When you reach 5th level, you can cast the spike growth spell once with the trait and regain the ability to do so when you finish a long rest. Wisdom is your spellcasting ability for these spells.
Mountain Born. You're acclimated to high altitude, including elevations above 20,000 feet. In addition, you have resistance to cold damage and are also naturally adapted to cold climates, as explained in chapter 5 of the Dungeon Master's Guide[1].
Powerful Build. You count as one size larger when determining your carrying capacity and the amount you can push, drag, and lift.
Languages. You can speak, read, and write Common and Sylvan.