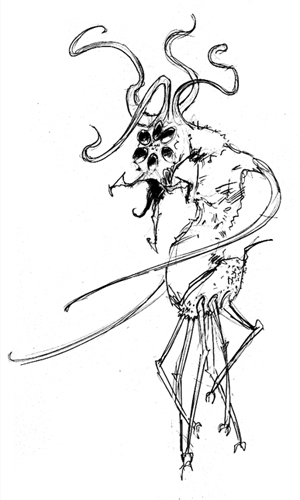 A bizarre, utterly symetrical creature takes shape in the air before you. Six equidistant eyes stare at you from an insectoid head set atop a humanoid torso. Half a dozen metallic legs extend from its base,providing the creature adequate support for its massive frame. In spite of this, it floats freely in the air just off the ground. An invisible compulsion forces you onto your knees as it suddenly whips at you with six razor-sharp tentacles...

A Zyxaxyz (six-ax-iss) is an enormous entity born from the union of two greater- or overdeities, one being lawful, the other evil. Because of this, its innate powers give it control over the very fabric of space itself.

A Zyxaxyz is 70 ft. tall and weighs 125,000 pounds. If its flight supernatural ability should be dispelled, it will strike the ground with enough force to create a powerful earthquake.

A Zyxaxyz's natural weapons are treated as epic, evil and lawful-aligned for the purpose of overcoming damage reduction.

A Zyxaxyz is, by any account, an extremely dangerous opponent. In combat it will attack with its six scythe-like tentacles and warp all 3 dimensions to deflect projectiles, shrink (and sometimes crush) enemies and fire rays from practically impossible angles. The greatest threat, however, is its ability to summon pit fiends: unlike regular summon spells, the fiends which it calls forth retain their ability to summon others of their kind. As such, one must be extremely careful when fighting against a Zyxaxyz, as things can quickly get out of hand.

Flay (Ex): if a Zyxaxyz hits with three or more of its tentacles on a full attack, it has partially skinned the target. In addition to the damage dealt by the tentacles, the victim takes 3d6 points of temporary Constitution damage that can only be removed by a cure serious wounds spell, or one with a similar effect. A DC 27 fortitude save will reduce the damage by half; the save is Constitution-based.

Condense Creature (Su): a Zyxaxyz can alter space to forcibly shrink a victim of its choice to a lower size category. No save is possible to evade the effects; however, it must hit with a ranged touch attack in order to take effect. In addition to the reduced ability scores brought about by this sudden decrease in size, a condensed creature takes 4d10 points of damage.

Dexterity Drain (Su): This effect permanently reduces a living opponent's Dexterity score by 4 every time the creature hits with a slam, flay or bite attack, or 8 points on a critical hit. The Zyxaxyz heals 20 points of damage (or 40 on a flay or critical hit) whenever it drains Dexterity, gaining any excess as temporary hit points. These temporary hit points last for a maximum of 1 hour. This attack allows a fortitude save (DC 58)--on a successful save, only 2 points of Dexterity are drained, and the Zyxaxyz heals 10 points of damage, reguardless of whether the attack was a critical hit. The DC is Constitution-based.

Rend Space (Su): a Zyxaxyz' mastery over the fabric of space is so great that it can literally create matter from nothing--or do just the opposite. Once every ten minutes, a Zyxaxyz can spend a full-round action amd 50 hit points to tear open a gaping wound in reality, bombarding everything within a forty-foot radius with the deadly energies of the rift for 1d4 rounds. At the end of this time, the dimensional rift closes, taking anyone unfortunate enough to be within five feet of it to a random plane (see the DMG for a list of possible destinations). During every round that the rift is open, everything within its radius takes 20d4 points of force damage; a reflex save of 36 is required to reduce the damage by half (Note that this applies even if you have the improved evasion feat; it isn't possible to escape from radiation!). The Zyxaxyz itself takes no damage from the radiation, and cannot be shifted to another plane by the rift when it closes.

Gravity aura (Su): a Zyxaxyz' incredible mass, combined with its ability to warp space, gives it the ability to exert a powerful gravitational field. As a free action, it can alter the gravity in a fifty foot radius to catch its opponents literally off-balance; the gravity can be normal one round, nonexistant the next, and crushingly high after that. It will use this ability once every fifteen rounds until it has dropped below 750 hit points, at which point it will use this ability much more frequently.

Diffractive Ray (Ex): a Zyxaxyz can fire a ray of intense energy from its eyes, inflicting 5d6 points of force damage on a single target. Normally a standard action, the Zyxaxyz can shift its full attention to controlling the flight path of the beam, making it loop around to strike the target from behind or rebound off of the victim to blast his cohorts. A DC 50 Fortitude save is required to reduce the damage by half. When the creature is manipulating the beam's trajectory in one of the manners described above, all targets take a -10 penalty to their AC due to the unnexpected nature of the attack.

Banishment (Su): although it seems to enjoy battling adventurers, the Zyxaxyz is a practical creature capable of reason; if its health is below one-third of its maximum, the creature will single out the enemy which has done the most damage, and open a wormhole beneath his or her feet. This wormhole will then absorb the target, spitting them out on another plane and preventing them from returning to the plane containing the Zyxaxyz for 24 hours. Needless to say, this can be quite problematic if the victim doesn't happen to know the plane shift or Precipitate Breach spells. To avoid being sent into another plane, the victim must succeed on a DC 35 Will save. Success means that the victim manages to tear himself free before the wormhole closes. Once used, the Zyxaxyz will be unable to reactivate this move for 10 rounds, at which point it will try again.

Alter Trajectory (Ex): a Zyxaxyz can make an opposed attack role against any ranged attacks (such as arrows or certain spells) to alter their flight path, either causing them to veer off and miss, or undertake a u-turn and strike the caster/attacker. When making its attack role, the Zyxaxyz applies only its BAB and a penalty based on what it is trying to do: