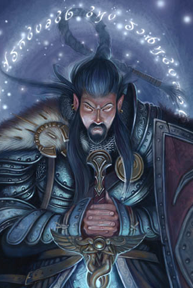 Abilities: While templars are fairly multi-ability dependent, the more important stats include: strength for damage output and carry weight, constitution for durability because dodging most damage spells just isn't going to happen when clunking around in heavy armor, and charisma for all your spell casting needs and extra zealous smites. Intelligence is usually the first stat people dump when building templars mainly because templars get next to no skill points or skills to choose from. Dexterity can be built effectively if you have reasons to justify losing the heavy armor, but being able to cast spells in heavy armor is really good so make sure you know what you're doing if you decide to take this route.

Races: Almost every civilized race make good templars, each with their own advantages. However dwarves are usually the exception to this, as the charisma penalty makes them less effective as templars. Although one could argue you could build a charisma-less dwarf templar, in most cases a well built fighter or slayer does that job more effectively.

All of the following are class features of the Templar.

Weapon and Armor Proficiency: Templars are proficient with all simple and martial weapons, with all types of armor (heavy, medium, and light), and with shields (except tower shields).

Domain: A templar casts divine spells, which are drawn from her chosen domain. However, her alignment may restrict him from casting certain spells opposed to her moral or ethical beliefs; see Chaotic, Evil, Good, and Lawful Spells, below. A templar casts spells spontaneously, and need not prepare them in advance.

A templar’s deity influences her alignment, what magic she can perform, her values, and how others see him. A templar chooses one domain from among those belonging to her deity. A templar can select an alignment domain (Chaos, Evil, Good, or Law) only if her alignment matches that domain.

Like other spellcasters, a templar can cast only a certain number of spells of each spell level per day. Her base daily spell allotment is given on Table: The Templar. In addition, she receives bonus spells per day if she has a high Charisma score.

If a templar is not devoted to a particular deity, she still select a domain to represent her spiritual inclinations and abilities. The restriction on alignment domains still applies.

The domain gives the templar access to a domain spell at each spell level she can cast, from 3rd on up.

One's domain also grants a power at 1st level. The power gained at first level may be swapped for a devotion feat from (CC page 60).

Chaotic, Evil, Good, and Lawful Spells: A templar can’t cast spells of an alignment opposed to her own or her deity’s (if she has one). Spells associated with particular alignments are indicated by the chaos, evil, good, and law descriptors in their spell descriptions.

Zealous Smite (Su): Once per day, a Templar may make a zealous smite attempt in place of a normal melee attack. She adds her Charisma bonus (if any) to her attack roll and deals 1 extra point of damage per Templar level. If the Templar misses the attack, the smite has no effect, but the ability is still used up for that day. This ability is subject to most feats that modify the "smite" ability found on the paladin, ask your DM for advice if needed.

At 4th level, and at every four levels thereafter, the Templar may make a zealous smite one additional time per day, as indicated on Table: The Templar, to a maximum of six times per day at 20th level.

Blessings (Su): At 2nd level, a templar gains the ability to gain additional spells per day, smite attempts, and extra uses of powers that require turn undead attempts. Once per turn, at any time when the templar is conscious, she may use a free action to gain one of the following:

She may use this ability a number of times per day equal to her Charisma modifier.

Bonus Feats (Ex): At 2nd level and every four templar levels thereafter (6th, 10th, 14th and 18th), The templar gains an additional bonus feat. These bonus feats are not limited to the list of fighter bonus feats. A templar must still meet all prerequisites for a bonus feat, including ability score and base attack bonus minimums. These bonus feats are in addition to the feat that a character of any class gets from advancing levels.

Relic (Su): At 5th level a templar's weapon receives a blessing from their god, granting it a +1/+1 enhancement bonus and a magical property of the templar's choosing with the +1 base price modifier, listed here.

At 13th level, the enhancement bonus increases to +2/+2 and the templar may rechoose a magical property up to a +2 base price modifier.

A Templar may multiclass just like any other class, but a Templar who ceases to follow his or her deity, loses all Templar spells and abilities except for weapon, armor, and shield proficiencies. An Ex-Templar may not progress any farther in levels as a Templar. She regains her abilities and advancement potential if she atones for her violations (see the atonement spell description), as appropriate.

Zealous Smite (Su): The epic Templar adds his or her class level to damage with any zealous smite attempt as normal. He or she can smite one additional time per day for every four levels higher than 20th.

Epic Bonus Feats: The epic Templar gains a bonus feat (selected from the list of epic Templar feats) at every specified level on the table above.