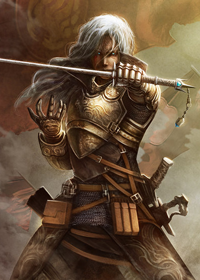 Slayers have many different names across the land; warrior, duelist, knight, etc, but all share a common goal, to defeat their opponent. Each slayer has a different method of reaching this goal. Some are brutal and straight forward, some prefer the intricate art of dueling, while others resort to trickery and creative maneuvers to defeat their opponent. Versatile, well trained, and tough as an ox, These are the traits of the slayer. However a slayer chooses to defeat his opponents, they are always quite skilled at it.

Abilities: Strength, Dexterity and Constitution are all equally important to a slayer, so whatever build you decide upon, each has its own importance. Strength is generally for damage dealing and heavy lifting and should be taken on more brutish slayers. Dexterity is in a way an alternative to strength because of weapon finesse, it is often a more versatile build as it adds a large amount to ones AC and allows for strength to be largely ignored, opening up other stats for improvement. Constitution is fairly obvious, it lets you take damage, tons of it. So if you're building a front line character, such as a bodyguard or a soldier, its very important. The least important stat for a slayer is most likely intelligence as the skill choice and skill points you receive are quite limited. If one desires more intelligence on a character, rogue gets the job done much better than a slayer for the most part.

Races: Slayer is pretty open ended in terms of what races choose it. Races with lower physical stats or with more focus on magical combat, wont find much in the slayer class. Otherwise, you can find slayers in almost any race.

Weapon and Armor Proficiency: A slayer is proficient with all simple and martial weapons and with all armor and shields (including tower shields).

Cross-Training (Ex): The Slayer's training gives him a more advanced degree of familiarity and skill with melee and ranged weaponry. Slayer class levels qualify for feats that usually require a minimum number of Fighter levels, such as Weapon Specialization. These levels stack with actual Fighter levels, so a Slayer 4, a Fighter 4, and Slayer 2/Fighter 2 would all qualify for Weapon Specialization.

Bonus Feats: At 1st level, a slayer gets a bonus combat-oriented feat in addition to the feat that any 1st-level character gets and the bonus feat granted to a human character. The slayer gains an additional bonus feat at 3rd level and every odd level thereafter (5th, 7th, 9th, 11th, 13th, 15th, 17th, and 19th). These bonus feats must be drawn from the feats noted as fighter bonus feats. A slayer must still meet all prerequisites for a bonus feat, including ability score and base attack bonus minimums.

These bonus feats are in addition to the feat that a character of any class gets from advancing levels. A slayer is not limited to the list of fighter bonus feats when choosing those feats.

Talents (Ex): As a slayer continues to learn the art of combat, he learns a number of talents that aid him and decimate his foes. Starting at 2nd level, a slayer gains one talent. He gains an additional talent for every 2 levels of slayer attained after 2nd level. A slayer cannot select an individual talent more than once.

In addition, at 6th level, shields grant an additional +1 shield bonus to AC. This bonus increases by 1 at 11th, 16th, and 20th level.

In addition, a slayer with this feat can make a feint action as a move action.

These variables increase by 1 for every four slayer levels he possesses. Therefore a 4th level slayer would reduce armor check penalties by 2 and increase maximum dexterity bonuses by 2.

In addition, at 10th level, a slayer can move at full speed while wearing heavy armor.

In addition, any weapon specific feats the slayer has, such as weapon specialization or weapon focus, now apply to all weapons, instead of just the selected weapon.

The second feature is the option to climb on top of a creature at least two size categories larger than you. First, attempt to move into the creature's space by making a DC 15 Climb check as a free action to clamber onto the creature's back or limbs. While on the creature, ranged weapons don't provoke attacks of opportunity, and you get a +2 to attack rolls with one handed weapons and ranged weapons. The creature you're standing on takes a -4 penalty on attack rolls against you, because it can strike at you only awkwardly. If the creature moves during its action, you move along with it. The creature can try to shake you off by making a grapple check opposed by your Climb check. If the creature succeeds, you wind up in a random adjacent square and take 1d6 nonlethal damage.

A slayer who multiclasses, or changes his alignment, retains all class features and proficiencies.