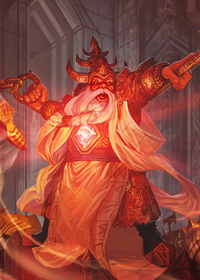 Where clerics often fan out to dispatch the justice of their gods, priests focus more on the community of people who already believe and creating a utopian society based on their deity as well as devoting a very large portion of their lives to studying and strengthening their faith through prayer or meditation. A priest can be anything from the leader of a church to a tribal magician, but they always have a powerful conviction to their god.

Abilities: Wisdom is the primary ability score for priests as it dictates their spells and dissipate, but Charisma is also useful for turning and rebuking undead.

Races: Races of many origins choose to be priests. All it takes to become a priest is a desire to learn and love for one's god, however, goblins rarely become priests.

All of the following are class features of the priest.

Weapon and Armor Proficiency: Priests are proficient with all simple weapons as well as light armor and medium armor.

Spells: A priest casts divine spells, which are drawn from the priest spell list. However, his alignment may restrict him from casting certain spells opposed to his moral or ethical beliefs; see Chaotic, Evil, Good, and Lawful Spells, below. A priest must choose and prepare his spells in advance (see below).

Like other spellcasters, a priest can cast only a certain number of spells of each spell level per day. His base daily spell allotment is given on Table: The Priest. In addition, he receives bonus spells per day if he has a high Wisdom score. A priest also gets one domain spell of each spell level he can cast, starting at 1st level. When a priest prepares a spell in a domain spell slot, it must come from one of his domains (see Deity, Domains, and Domain Spells, below).

Priests meditate or pray for their spells. Each priest must choose a time at which he must spend 1 hour each day in quiet contemplation or supplication to regain his daily allotment of spells. Time spent resting has no effect on whether a priest can prepare spells. A priest may prepare and cast any spell on the priest spell list, provided that he can cast spells of that level, but he must choose which spells to prepare during his daily meditation.

Deity, Domains, and Domain Spells: A priest’s deity influences his alignment, what magic he can perform, his values, and how others see him. A priest chooses one domain from among those belonging to his deity and receives additional domains at 2nd and 20th level. A priest can select an alignment domain (Chaos, Evil, Good, or Law) only if his alignment matches that domain.

If a priest is not devoted to a particular deity, he still selects domains to represent his spiritual inclinations and abilities. The restriction on alignment domains still applies.

Each domain gives the priest access to a domain spell at each spell level he can cast, from 1st on up, as well as a granted power. The priest gets the granted powers of all domains he possesses.

Spontaneous Casting: A good priest (or a neutral priest of a good deity) can channel stored spell energy into healing spells that the priest did not prepare ahead of time. The priest can “lose” any prepared spell that is not a domain spell in order to cast any cure spell of the same spell level or lower (a cure spell is any spell with “cure” in its name).

An evil priest (or a neutral priest of an evil deity), can’t convert prepared spells to cure spells but can convert them to inflict spells (an inflict spell is one with “inflict” in its name).

Chaotic, Evil, Good, and Lawful Spells: A priest can’t cast spells of an alignment opposed to his own or his deity’s (if he has one). Spells associated with particular alignments are indicated by the chaos, evil, good, and law descriptors in their spell descriptions.

A priest may attempt to turn undead a number of times per day equal to 3 + his Charisma modifier. A priest with 5 or more ranks in Knowledge (religion) gets a +2 bonus on turning checks against undead.

Conviction (Su): A Priest's dedication to his faith requires him to abstain from a few things. First, trading divine power for arcane power is blasphemy, therefore, priests are not eligible for the Divine Metamagic (CD), and Still Spell feats. Second, heavy armor and shields are disgraceful for a priest to wield, so while wearing heavy armor or wielding a shield, a priest suffers arcane spell failure chance as if their spells were arcane. Finally, priests are trained differently than other divine casters in the monasteries where they are raised, therefore the priests spell list has the following changes:

Animate Dead (Sp): Darker priests know the best ways to create and optimize undead. At 3rd level, a priest may cast a more balanced version of Animate Dead as if it were a 2nd level spell. Refer to Undead Mastery for detailed rules on the changes.

Dissipate (Su): At 4th level, a priest learns how to cleanse magic from a target. A priest may activate this ability as a standard action that functions as dispel magic with the following exceptions: dissipate functions only as a targeted dispel, therefore, it only effects one target creature, object, or spell. This ability does not provoke an attack of opportunity. You may use this ability up to once per day and one additional time for every 4 priest levels after level 4. Finally, the priest receives a +1 competence bonus on dispel checks for dissipate that increases by 1 at levels 8,12,16 and 20.

Bonus Feats: At 6th, 10th, 14th and 18th level, a priest gains a bonus feat. At each such opportunity, he can choose any feat he meets the prerequisites for, including caster level minimums.

Bonus Languages: A priest’s bonus language options include Celestial, Abyssal, and Infernal (the languages of good, chaotic evil, and lawful evil outsiders, respectively). These choices are in addition to the bonus languages available to the character because of his race.

A priest who grossly violates the code of conduct required by his god loses all spells and class features, except for armor and proficiency with simple weapons. He cannot thereafter gain levels as a priest of that god until he atones (see the atonement spell description).

Spells: The priest’s caster level is equal to his or her class level. The priest’s number of spells per day does not increase after 20th level

Turn or Rebuke Undead: Use the priest’s class level to determine the most powerful undead affected by a turn or rebuke check and the turning damage, just as normal.

Dissipate: The epic priest continues to gain an additional use of dissipate every four levels after 18th.