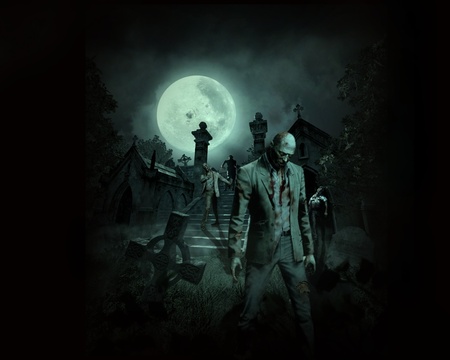 When a creature reanimates as a zombie its abilities change:

STR: +2 (A zombie isn’t stronger than a human, but it ignores pain and can therefore push its body to its limits)

DEX: -4 (A zombie suffers a loss of muscular coordination)

INT: +1 (A zombie brain is as effective as an animal, if not more)

WIS: -2 (A zombie uses his original ability modifier for listen and spot checks)

CHA: -2 (A zombie is obviously not very charismatic)

A zombie loses all its speak and write abilities, and is left with groans and gutteral sounds.

A zombie’s speed is ½ of its original speed and can’t run.

Variant: Fast zombies, in the style of 28 Days Later or the Dawn of the Dead remake, would retain their original speed and would be able to run.

A zombie doesn’t get its DEX bonus to initiative.

A zombie attacks normally. It has several different attacks:

Here's my take on realistic zombie attacks. Give them a "Slam" attack as their only attack mode. Then give them "Improved Grab" that gives them a free grapple attack after they hit with a slam. Once they establish a grapple, they get a free bite attack against their foe (attack bonus equal to slam attack) on any round they begin in a grapple (bite damage 1d2+1/2 str).

My reasoning? Any zombie I've ever seen acts like that way: it always tries to grab hold of something before biting it. Unless it's arms are restrained, the bite occurs after their opponent is immobilized with a grapple.

A third method that has worked well for my Fast Zombie campaign is more merciful to the players in order to balance for the zombie's speed. Players are allowed multiple Attacks Of Opportunity and opposed grapple checks before being exposed to a potentially fatal bite. Zombies can take double movements and perform charges; base speed is 30.

Zombies main attacks are claws in melee or bites in a grapple. Zombies attempt to grapple following a successful touch attack (one AoO or more with the Combat Reflexes feat, and an opposed grapple check). If successful player is knocked prone to the ground along with the zombie. The zombie attempts to bite the player (another opposed grapple check) and does damage appropriate to its size (I use 1d6+2), transmitting the Virus to the player. When a zombie claws is mainly Zombie Master discretion, I usually have zombies claw when making AoOs or any time when the players are moving away from the zombie, simulating a failed one-handed grab tearing away flesh. Again damage is according to size (I use 1d4+2). If the zombies charge, they attempt a grapple with the standard +2 attack/-2DB and the additional AoO for the player.

Remember that 4 medium creatures can grapple one player at a time, or 8 small creatures (kiddie zombies). When a player is surrounded by zombies and grappled, the remaining zombies try to join the grapple or claw the player with the +4 bonus for melee attacks against a prone target.

A zombie loses all his class abilities, feats, talents, FX abilities and the like. A zombie gets the special ability Scent (Ex), though zombies can only smell humans.

Every 2 months after the zombie has been reanimated it gets 2 points of ability damage to all abilities. This is only relevant when making old zombies or determining when the zombie threat ends in an isolated area. (GMs may want to ignore this rule when running a campaign long time after the zombie invasion.)

Zombies are immune to all poisons and diseases.

There's only one way to bring down a zombie: destroying the brain. Here are variant rules for handling headshots:

The zombie NPC has two Defense values and two sets of HP, one of each for the head and the body.

Critical hits automatically hit the head and deals damage to the head with all multipliers.

Coup de Graces automatically hit the head and deals damage to the head with all multipliers.

A weapon deals damage normally to the head and the body but they have different amounts of HP.

Fast zombies heads are harder to hit. The hitpoint system in this variant serves to give the player more dramatic options in combat, such as calling shots to the head. With good rolls zombies go down quickly, allowing for more zombies killed per capita. More dead zombies equals more fun had by all.

In this variant, the zombie's hitpoints aren't split, they have 11 HP; Defense bonus is low at 11 as well. Given average gun damage in D20 (7 on 2d6 or 9 on 2d8), this means that normally a zombie will take 2 shots to kill. It's assumed that once a zombie takes a sufficient level of damage that part of that damage has disabled the head.

Headshots are entirely up to the player in combat. The zombie's head has a DefB of 19 (+4 for size, +4 for the player calling the shot). Any damage to the head kills the zombie. The head has to be willfully targeted; explosion or splash damage hits the entire body. Headshots are a calculated risk; most players reserve targeting the head for critical situations.

The virus spreads via blood, spit and other body fluids, ex from a bite from a zombie. When a character is infected he makes a fortitude save every 30 minutes, if he fails he dies/takes damage, if he succeeds he take damage and/or ability damage to strength, dexterity and constitution.

Every 30 minutes the fortitude DC gets higher. The DC is 10 + the zombie’s constitution modifier+2 for each 30 minutes after the first 30 minutes. If the subject rolls under 10 he dies.

The subject reanimates after 1d10x 10minutes (from 10 minutes to 1 hour 40 minutes). The PCs shouldn’t know the result of this roll.

Sometimes when handling NPCs infected by the virus the GM should decide when the NPCs die and reanimate instead of rolling.

The disease can’t be cured in any way, but if one is bitten in a limb and you remove that limb, before 10 minutes after the bite, the person has a 20% chance to not be infected (roll d%). Cutting of a limb requires a Treat Injury check. If the check fails the subject dies from heavy blood loss and will reanimate as a zombie if the d% check failed too. A surgery saw (see new equipment) gives a +5 bonus to the Treat Injury check.

One big consideration for a Zombie Master is boredom. Killing zeds is great for two or three sessions but challenges need to be varied to be exciting. Remember Murphy's Law. If you can think of something horrible or inopportune that could happen to the players, they can think of a way to get out of it.

Humans can be enemies too. Create moral conflicts. Should the players stop to help other survivors or is it every man for himself? Scavengers and raiders will try to steal and strongarm supplies. Are they to be negotiated with or shot on sight?

Survival horror as a genre requires a fair measure of dread to be maintained by the ZM (Zombie Master). Your players should never feel safe, especially after the apocalypse. In general, players feel safe when they feel prepared. Limit ammunition, medical supplies, safe houses or fortifications, friendly NPCs, and methods of transportation. This helps you control the flow of play and opens up tons of story opportunities.

Bad weather is one of my favorite tools for limiting the players options. The roads are already full of wrecked cars, but now it's snowing. Force your players to get creative, and try not to say no when they think of something. You get the idea.

Consider adapting the 4th edition D&D skill challenge system for your D20 modern campaign (see Recommended Books). It is a great system that requires a certain number of skill successes before failures. The whole entire party can help out too if they think of a creative way to use one of their skills. It balances skill based encounters very well and allows the ZM to accurately portray negotiations, bartering, repairing, making improvised demolitions and other complex tasks.

Every epidemic-level virus will mutate given time. The sheer number of infected humans means that out of everyone, a very small percentage of us will show a natural resistance to the virus. Quite possibly your players are resistant; the virus may still turn them but being bitten is not an automatic death sentence. Consider giving your players a bonus to FORT saves against the virus, or creating a feat to give them such a bonus.

But if the players have genetic strengths, some humans will have genetic weaknesses. The virus not only turns some people into zombies, it mutates them into horrible monsters. Use any inspiration you can, from movies to video games.

The only real guideline that you should have is to not repeat any specific mutation. Every monster should be unique, because the fear of the unknown is so effective. Get monster stats from books or the internet and apply the undead template from the D20 Modern Core Book, adding in nasty attacks or defenses for flavor. Get creative : a zombie created after a chemical plant meltdown could spew acid or hazardous chemicals, a bodybuilder could turn into an unstoppable giant hulk, or an infected mountain lion might mutate into a fanged nightmarish killing machine with multiple rows of jagged teeth.

Following is an example of a boss monster that a friend of mine used to great effect in his zombie campaign. It is a nigh unkillable hulk covered in mutated bone growths. Parts of its head were blown off as it was transforming, so head shots are ineffective against it in its current form.

The Bone Monster uses its strength to crush and destroy anything that standing in between it and the players. It is not smart enough to throw cars or other objects, but its partially destroyed head can still hear gunshots from a distance. The Bone Monster's armored exterior is effective at stopping pistol and shotgun fire. Pointed (spitzer) rounds typically used with rifles can penetrate this armor. Armor-piercing rounds are also effective