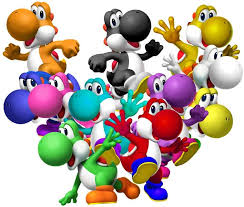 A group of happy Yoshis

Yoshis are a sentient species of omnivorous dinosaurs. They are characterized primarily by their production and use of eggs as offensive tools. Yoshis appear to be less intelligent than most sentinet beings but this is more likely to the many years they were enslaved by humans as riding mounts. Their great speed and strong legs made them exceptional mounts, but this was disgraceful lifestyle for them. Fortunately, it's been many generations since Yoshis were freed from that fate. Some Yoshis will even now let their closest friends ride on their backs for fun. Yoshis are generally fun-loving but prideful creatures. The only thing they enjoy more than racing is eating.

Racial Traits: +2 Str, +2 Dex, -4 Int, -2 Wis; Medium; 40ft base speed because Yoshis have very nimble feet and their favorite pastime is racing; Yoshis come in a variety of pastel colors but most commonly are green. Yoshis have strong legs and are excellent jumpers. +2 to athletics and acrobatics.

Abilities: Str and Dex are most important to a Yoshi to fully excel at eating and racing. Occasionally Yoshis place importance on Charisma in order to get through life's trickier situations with pure charm.

Weapon Proficiency: Yoshis are proficient with Simple weapons but primarily only use their natural abilities for combat.

Tongue Attack: A Yoshi primarily attacks with her tongue. This attack gets stronger over a Yoshi's life as the her tongue becomes more skilled and harder. A Yoshi's tongue does Bludgeoning damage. Yoshi's Dex modifier affects her tongue's Attack, and her Str modifier affects the damage.

Yoshi's Appetite: Yoshis love to eat and they implement this into their fighting techniques. Yoshi can attempt to swallow an enemy once per turn. First Yoshi must make a successful tongue attack. Then instead of doing damage she can choose to swallow her enemy. This requires Yoshi to make a Str check (d20+Str mod+Eating Title Bonus) against her enemy's Str check. Yoshi cannot swallow an enemy 2 sizes or more larger than her. If the Str check fails, the tongue attack does damage as normal. If it succeeds, then Yoshi swallows her enemy, and on the next turn can use a Spitfire ability. The enemy is immobilized and cannot move when in Yoshi's mouth. However, if Yoshi decides to hold the enemy in her mouth longer than one turn, she must make a Fort save each new turn. (DC 10+enemy level+enemy Str mod)

Spitfire: Upon successfully swallowing an enemy, Yoshi may use one of her spitfire abilities on the following turn. Access to certain abilities are limited by a Yoshi's experience and the quality of enemy swallowed. Spitfire attacks have a range of 10ft for every +1 Str mod Yoshi has. So if Yoshi has a Str of 18 then she has a Str Mod of +4 and can Spitfire up to 40ft. The swallowed enemy reappears wherever the Spitfire attack made contact or at the end of the attack's range. If contact is made with another enemy, the swallowed enemy reappears in an adjacent square to the attacked enemy.

Fruit Lover: Yoshis sincerely enjoy eating fruit. Starting at level 2 anytime Yoshi eats up to a 1lb in fruit, which they can do as a move action, they heal 10hp and can use their basic Egg Attack once. Each Yoshi has a specific favorite fruit that gives her special effects when eaten. See below for list of Favorite Fruits.

Eating Titles: Starting at level three and every three levels thereafter, Yoshi gains a new title for her talented eating ability. The first title gives her a +1 Bonus to her tongue's Attack and Damage. This Bonus increases by 1 for each new title. This Bonus applies even when trying to swallow an enemy.

Salivation: At level 7, the inside of Yoshi's mouth has become fairly smelly due to all of the traffic in and out of it. After a swallowed enemy is released, it must make a Fort save (DC 10+Yoshi's Cha mod) or be dazed. At level 14 the smell has become so bad on a failed save the enemy is stunned.

Racing Speed: At 10th Level Yoshis increase their base land speed by 10ft. After years of racing, Yoshis are able to increase their natural speed. Some say they do this by constantly focusing on their favorite food, chocolate chip cookies.

Improved Fruit Eater: Yoshi's Favorite Fruit effects improve. In addition, all other fruit heal 30hp and allow the use of Fireball after eating.

Ability Reqs: Each ability other than Egg Attack can only be learned/used after acquiring a certain level. In addition, those attacks require the swallowed enemy to have a certain HD. 1st-7th level abilities require 1-5HD. 9-15th require 6-10HD. 17th-20th require 10 or higher HD.

3rd level- Egg Prison: Instead of spitting out an egg, Yoshi poops out a large egg with the swallowed enemy trapped inside. The enemy is trapped for a max of turns equal Yoshi's Str mod. However, each turn they have a chance to break out upon a successful Str check. (DC 10+Yoshi's level+Yoshi's Str. If the enemy swallowed by Yoshi is larger than Yoshi, the DC takes a -5 and +5 if smaller enemies.)

5th level- Fireball: Yoshi shoots a Fireball out of his mouth. It does 1d6 per Yoshi's level (max 10d6) damage. Reflex save for half damage. (DC 10+Yoshi's level).

7th level- Rapid Egg Attack: Yoshi makes a full-attack shooting an egg per her attack Bonus. Ex. Attack Bonus is +11/+6/+1, then Yoshi can shoot 3 eggs each with its appropriate attack bonus. Swallowed enemy reappears where the 1st egg makes contact.

9th level- Great Fireball: Yoshi shoots a fire ball except that it's 15ftx15ft and won't extinguish until it's traveled Yoshi's full Spitfire range.

13th level- Shell Shield: Yoshi cocoons himself in 10ftx10ft hard shell. It can be broken but only by an attack 2x Yoshi's AC. The shell lasts for as many rounds as Yoshi's Str mod. While in the Shell Yoshi cannot see, smell or hear anything outside the shell. The shell can move at Yoshi's base speed.

15th level- Rapid Fireball: Yoshi can shoot out as many fireballs as its Cha mod. Swallowed enemy reappears where the 1st Fireball makes contact.

20th level- Dragon's Breath: Yoshi spits out a 15ftx45ft cone of hot ashy fire from the pits of his bowels. Any that come in contact take 10d8 damage and it leaves thick smoke in the air greatly reducing sight in the affected area.