A Yordle is a mammalian bipedal sentient feline-like being. Once a nomadic race of animals they have evolved over centuries to fight off those that considered them prey and discover the wonders of magic. Today they generally are a peaceful and amicable race, often marked with streaks of joviality and light prankishness; their moral compass is most often pointed toward goodness and benevolence. Yordles are quick to befriend and to learn all they can about the world around them. The vast majority of Yordles live together in communes hidden in mountain ranges, valley’s, and thick forests. Their knowledge of magic, the sciences, and arts make them an integral part of society and are present in local politics. 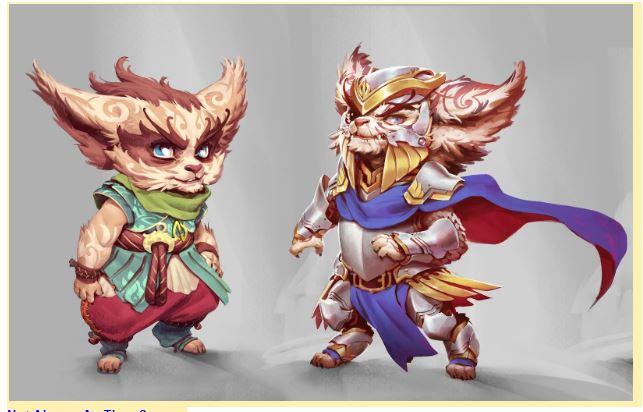 Two typical yordles. One armored and one not.[1]

Yordles rarely exceed 3 feet tall, with most averaging around 2.5 feet. Their skin texture ranges from being completely smooth, to very lightly covered in fur, to ultimately being significantly furry. Their hands have four digits while their feet differ greatly depending on the individual (from four to two digit feet). Their skin tone runs a much broader spectrum of colors than their human counterparts; some consider this to be a sign of the yordles’ attunement to natural magic; though scientists agree that this evolutionary trait is used by male Yordles (which tend to be furry ) to attract females of their species (which tend to be smooth skinned and/or lightly covered with fur). Their large eyes feature a large, circular iris with a vertically oval pupil. Furthermore, they are commonly characterized by their dependence on language, as well as their creation and utilization of complex tools.

Typically the male of the species tend to grow their fur out, often causing them to look like a ball of fur. Meanwhile it is not uncommon for the females to shave their fur to appear more “human-like.” However, instead they are sometimes mistaken for gnomes when doing so. Due to their nomadic nature and history Yordles have evolved to have nearly every possible fur colors including, but not limited to: red, orange, black, white, purple, yellow, and blue. If shaven Yordles tend to be between blue and purple in terms of skin color. Eyes are blue, purple, yellow, orange, or red. Yordles are also known for their large eyes and ears. Ears vary from 1-15 inches in height.

The Yordle race requires far more social interaction with their own kind than humans do. Their desire for social interaction drives them as the mental health of a yordle is very much dependent on the positive company he or she keeps. This does not mean, however, that they are incapable of cruelty and evil. In fact, a yordle who is kept in isolation for too long – especially from contact with other yordles – runs the risk of becoming withdrawn and sullen. Some who already are centered more toward malevolence will become exceedingly so in due course. These yordles will often twist their desire for social interaction into a desire to seek out others to inflict pain and suffering upon them.

Yordles almost always get along with all people, but their trickster nature has been known to have them banned in certain cities and sometimes killed on sight in some countries. Yordles love to learn and share their knowledge to others. Because of this the relations they have with colleges is very sacred.

Yordles are excitable and are pranksters at worst. Most Yordles tend to be Lawful Good or Chaotic Good. It is not unheard of that yordles who have been treated poorly or abandoned have leaned towards Chaotic Evil. The heavy majority of yordles prefer connecting to nature and the arcane rather than deities.

It is not uncommon for young Yordles to leave their respective homes to travel and explore the world whether for knowledge or for fun. Most Yordles love interacting with people of all races and cultures. Many adventuring Yordles only do it for the fun and excitement.