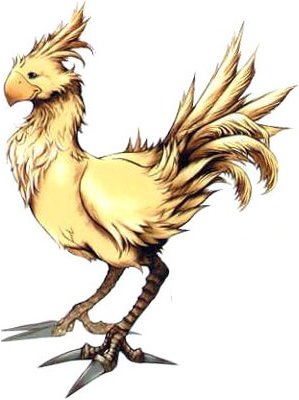 A large yellow fowl preens in the grass, standing about eight or nine feet tall. Several others of its kind are around it, eating greens and nuts. Its long hard-scaled, three-toed legs make up a good portion of its height, the rest is feathery torso, wings, neck and head. It is almost entirely yellow, from its eyes to its tail feathers; even its scaly legs and hard, sharp beak are tinted yellow.

A chocobo has a special gland that excretes an extremely potent healing balm. It can use this balm on itself as a standard action, tending its own wounds and recovering 3d8+7(one half HD) HP. A chocobo can use this ability on creatures within 5 ft., but it takes a full round action for each creature. Using Choco Cure on itself does not provoke attacks of opportunity, but using it on others does.

Chocobos are great at jumping, using their strong legs and wings to optimal effect. Because of this, chocobos gain a bonus on jump checks equal to one third of their HD.