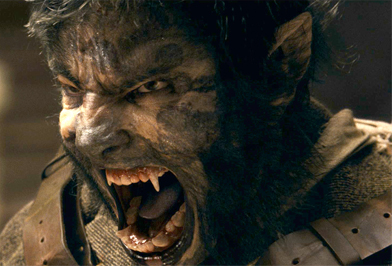 Those of the Wolfborn clan are a group of beings who are similar in most aspects to man, but display several wolf like attributes. These include usually gray and white hair, wolf ears in the place of human ears, and often but not always those of the Wolfborn clan have been found to be born with wolf paws for feet. Due to the similarities to wolves, many of the Wolfborn in the world today have been hunted down and killed by those who consider them to be lycans. While this is not the case, most Wolfborn are outcasts.

Long long ago, when the world was still young and undeveloped, a clan of humans separated from the rest of civilization, removing themselves from societies of the time. The clan would travel about for years, seeking out a place to settle indefinitely in a quest to expand their clan and develop a new society. Eventually they would come to find such a place, setting upon a plateau high in the mountains. Here they would cultivate the land, farming and growing crops, as well as hunting what animals they could find in the surrounding land. Eventually the animals in the area would become strained, unable to support the growing population. It was at this time that the people began to capture and tame the animals in the area, developing stables and pens to domesticate a food supply. During this period a great number of changes began to happen to the land. The people cut down forests, taking all the natural resources they could as they expanded their growing population. All seemed to be well until the natural food supply ran out. The people of the clan noticed little changes themselves, now comfortable with their growing crops and amassing animal supplies. Little did they know that outside their town a storm was brewing.

Living in the area was also a pack of wolves. Hundreds and hundreds of them had been being birthed upon this plateau over the ages, and now the food supply in the area had died out, all thanks to the strange two legged invaders. Unlike normal wolves, these wolves were highly intelligent and legend has it that they were actually social with one another. It is said that the wolves banded together, enraged by the audacity of the beings who had destroyed their ancestral home. To the wolves it was said that this land was actually the birthing place of wolves, a divine ground which the goddess Lumos had created specifically for her children to grow and develop. The wolves knew that this place was theirs, so with little regret they attacked the clan which had altered their holy lands. Wars would rage between the people and the wolves for years, killing off many of both species, as well as reeking further havoc upon the land and the food supply the humans had built up. Eventually it is said that Lumos could no longer stand to see her children and the humans fight with one another, so she bless the unborn of the clan, creating a likeness within them of wolves, hoping to form a common ground for the two sides.

As child after child was born into the clan from that time on, the dominant trait of wolves was said to be visible. Long canine ears sprouted from the heads of these children, soft wolf like eyes could been seem upon their faces, and in some cases some children were even born with feet similar to wolf paws. Over time the people came to curse the wolves, deciding that it was obviously their fault for the twisted creatures which were being birthed everywhere throughout the clan. With new vigor the people fought back, finally driving the race of wolves to the brink of extinction. Years would pass without any problems, but the children of the clan still showed signs of wolf like traits. Eventually the people would began to see those born with these traits to be ill omens, being with evil etched into their very souls. The clan drove out all of those with the traits, scattering them like leaves in the wind. From then on they killed any child born with the "cursed trait".

It has been many years since the Wolfborn were rejected from their own clan, and since then much has changed throughout the land. Few Wolfborn remain to this day, and many of those who still survive do so only by avoiding the people who misinterpret them as some type of lycan or cursed being. Because of this Wolfborn everywhere often hide their traits or live secluded lives often feeling rejected and alone. Being that their traits are dominant genes, Wolfborn usually pass on their traits to their children.

The Wolfborn have many different personalities throughout their race, simply because they each vary by just how they were raised. Also, most will find themselves drawn to other sentient beings to form kinship bonds, traveling and assisting such beings in any way possible (Similar to a wolf pack.) Often Wolfborn will find themselves to be distrusting to those who have not proven themselves worthy of the respect of the individual, but some Wolfborn repress these feelings and can become kind and caring beings. 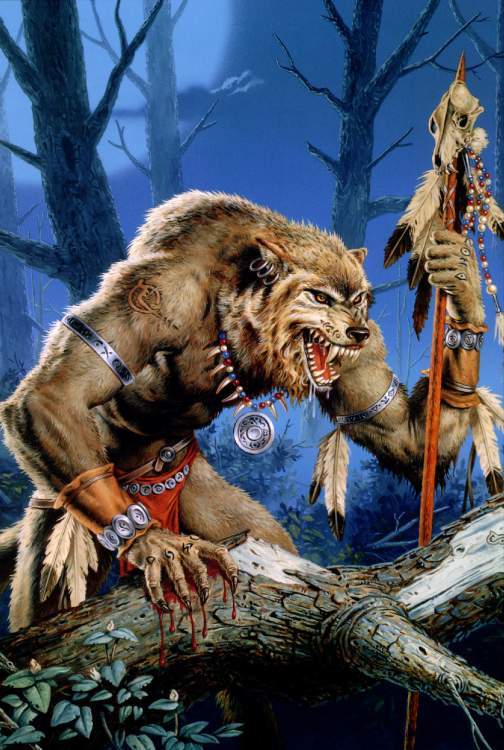 Wolfborn Shaman (Actual look is closer to Werewolf than Wolfborn)

Wolfborn are humanoids who are similar to humans in most ways but often have some wolf-like attributes.

A Wolfborn may stand from anywhere around 5'2" to around 6'5" in height, and tend to have muscular bodies. Their arms and legs are, in comparison, longer than those of a normal human and their head's a wolf. Some also have canine paws instead of human feet, but this is often a rarer attribute. Grown males tend to weigh in at somewhere between 150 and 220 lbs depending on their size, while females usually are between 130 and 200 lbs.

Usually a Wolfborn will have either brown or black hair, though some tend to have a gray/white mix. Most Wolfborn care greatly for their body's hair, often cleaning themselves with their own tongue (though many have moved on and wash themselves in what water is available). Their eyes usually are those of a canine, ranging in colors of dark brown, red, blue, green, or in some rare cases they will have differently colored eyes.

Many Wolfborn have unkempt facial hair, usually involving some type of large sideburns. It is not uncommon to find Wolfborn who have hair stretching from their scalp to below their neck, creating a sort of "mane".

Wolfborn are creatures of a civilized world, so as such they tend to enjoy company of others. They often travel in groups with others (not always other Wolfborn, but those whom they feel they can trust as well.) While not always the case, many Wolfborn will require a test of trust or a relationship of friendliness before they will simply trust those around them. Others still break away from the idea of a pack and instead become loners, often traveling long distances in search of a place to call home.

Wolfborn are usually of the Chaotic alignment with feelings on "good" and "evil" being left to the individual.

Wolfborn have become a rare race over the years, and as such they have been broken and separated. They seek places to call home but avoid areas known for their hate of lycans.

Wolfborn can follow the paths of any god or goddess, usually adapting the religious views of their parents if they haven't decided for themselves in which deity to trust.

Wolfborn speak common and often speak other languages depending on the area they are living in.

Many Wolfborn venture out into the world in seeking the opportunity to find and embrace a new life. As such they tend to find it alluring and hard to resist when it comes to chances to break out into a new life.

As usual they are far from being above other similar races, and as such it can be quite easy to tempt Wolfborn with gold and rewards as well.