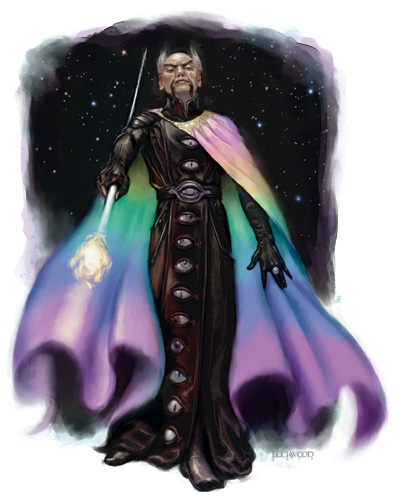 It has been posted here with permission.

Alert: Be ready for a long read.

Also, any empty sections will be transcribed.

Wizards are a vast class. Two wizards may differ in so many areas, even if their builds are similar. The main reason for that is of course, spell selection. But what attributes are required to wizards? This is a very difficult answer, that highly depends on the spells you use regularly.

Not all races are suitable for wizards. There are some points to take into consideration when choosing a race for your wizard.

For information see The Class

Wizards receive a low amount of skill points per level. However if you consider that most wizards have a starting intelligence of 15-16 they easily get 5+ skill points when they level up. They aren't exactly skill monkeys, but they can max out several useful skills.

Most consider the wizard class only 5-6 levels long. This is because after those levels the bonuses gained through prestige levels are most of the times a lot more powerful than 3 wizard feats. However prestige class aren't always as helpful as they seem to be. When looking to prestige consider the following:

Spells are the bread and butter of the Wizard.

The Dungeons & Dragons world has numerous and plentiful items that you can select when equipping your Wizard. Here are few items and sets to consider.

For information see Tricks and Comparisons