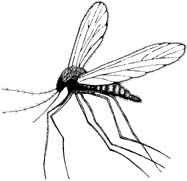 What appears to be an unusually large mosquito it is the size of a dog. Its wings can open to 3ft. each a sparkle in light as an insect's wings does.

The winged mantle appears to be an insect its wings are smaller when it is by itself. It can attach to the back of a host its wings then increase in size to match the size of the creature.

A Winged Mantle can only attach itself to a willingly or helpless host(as a full-round action). In general, a creature either seeks out a Winged Mantle to gain its benefits or encounters it accidently. It presses its own body against the back sending tendrils into the back muscles of the host with a strength powerful enough for the Winged Mantle's own wing strength to lift the weight of the host.

Winged Mantle can not speak, but it understands Undercommon.

Host benefit: The wings give the host the ability to fly as if the wings were its own. The Winged Mantle can also use the spell-like ability SRD:Detect Thoughts at will using the host's Charisma Bonus+Character Level=DC.

Fly (Ex): The Winged mantle gives the host the ability to fly at a speed 30ft. with poor manuverabiliy.