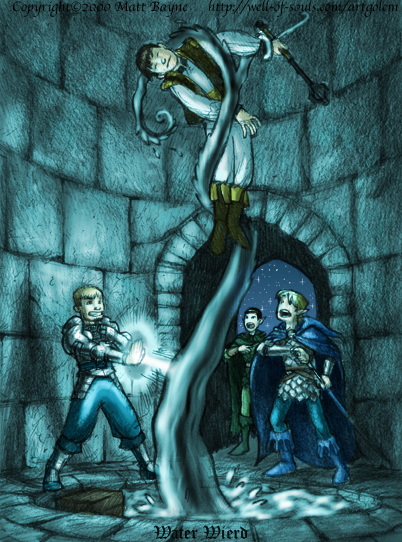 A water weird drowning its opponent.

Water weirds are a life form originating in the elemental chaos. They attack all living things, feeding from their essences in some unknown manner. These elementals form from water, appearing as a serpent, and lash out to grab targets. Their victims are dragged into water where they drown.

A character knows the following information about water weirds with a successful Arcana check.

DC 10: A water weird is a rare snake-like water elemental. They are as fast on land as they are in the water, and seek to drown their victims.

DC 20: Unlike most other water elementals, water weirds actively attack any living things to drain their life-force. Cold and ice attacks partially solidify them, rendering them vulnerable to further attacks.

DC 25: A water weird sometimes has an entourage of lesser water elementals. It is said that they can forcefully take control of such creatures by touch alone.

This water weird is the adopted deity of a tribe of bullywugs. Several bullywugs have been sacrificed to the elemental, their life forces drained as they drowned. Their withered corpses rise to defend the shrine. (Adapted from Greg Gillespie's The Bastion of the Boglings.)