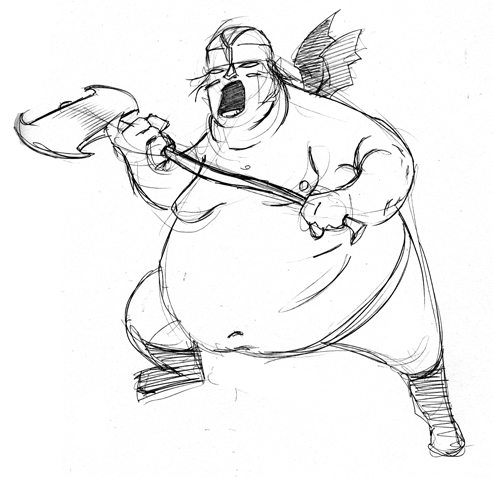 This giant resembles a fat, muscular human with small bat wings on its back. It has a large mouth and long eyes. It wears a massive fullplate and carries a double axe.

Unlike other giants, volvers don’t like to throw rocks but rather fight in melee, they are related to trolls and thus like to destroy and eat everything they can. Volvers don’t use their wings very often, they look ridiculous when they do, but when it is a matter of life or death, volvers don’t hesitate to fly away. Volvers speak Giant.

Unlike trolls, volvers flee if things get out of hand, it is one of the few occasions these creatures can be seen flying.

Trample (Ex): Reflex half DC 23. The save DC is Strength-based.

Regeneration (Ex): Fire and acid deal normal damage to a volver. If a volver loses a limb or body part, the lost portion regrows in 3d6 minutes. The creature can reattach the severed member instantly by holding it to the stump.