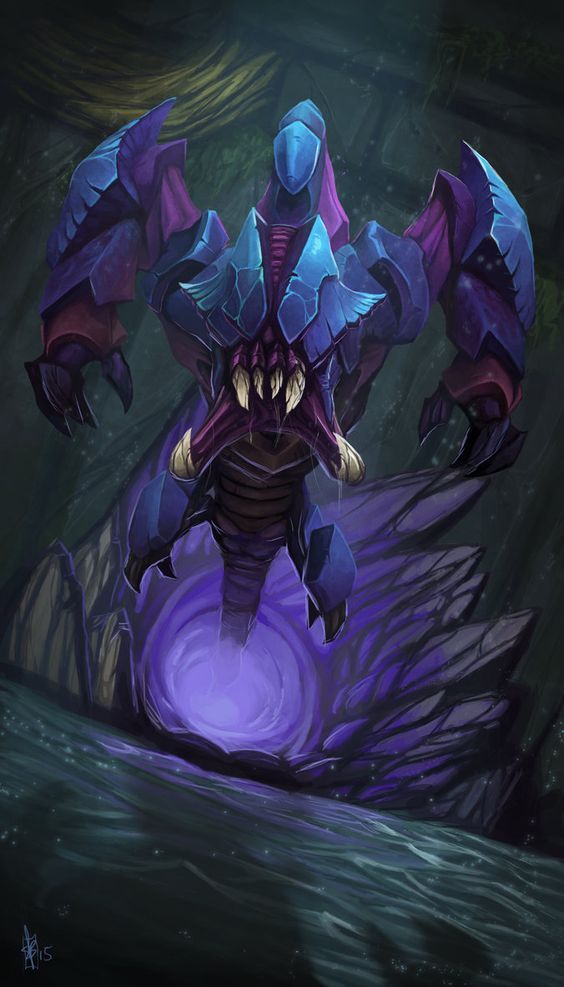 A Xer'Sai Erupting from within her underground tunnels in urban sewers.

Xer'Sai are creatures spawned from the depths of the Abyss. A dull and chaotic dimension between space and time. Only the most foul and vicious creatures can survive in the Abyss and thus the Xer'Sai are ruthless predators of the Abyss. Feasting on anything weaker, slower or, less cunning then themselves they age and grow rapidly in strength and size. A Xer'Sai has, just like all Voidborn, the ability to consume more than necessary converting the excess biomass into bodymass.

Xer'Sai are always female creatures though they can reproduce with any other Voidborn, producing new Xer'Sai eggs in the process. Their large, scaled bodies are built for extensive burrowing and thus they have no eyes. Though their purple flesh is quite soft, their plate mail-like scales more than make up for it. Xer'Sai spend a majority of their time underground, lurking for prey, awaiting the perfect time to pounce up from the ground. Xer'sai have 4 insectlike legs, 2 bulky arms with large claws and a mouth full of enormous fangs. Xer'Sai are usually dark toned creatures, sporting colours that resemble the night. The scale on their back acts like a shark's fin.

There's only 2 ways to gain respect from a Xer'Sai. One way is by proving yourself to be stronger/faster/smarter than them. The other way requires a bit more luck and patience, as you need to build up trust slowly, giving her less reason to feed off you. Bringing food or helping her stay fed might help in this process.

Xer'Sai are usually Lawful Evil, following the law of the strongest.

Xer'Sai are originally from the Abyss. When they arrive on the material plane, they tend to gravitate to areas with loose underground (deserts, marshes, ...). They avoid urban areas, because of the restrictions on her burrowing and the risk of a mass of armed guards when hunting there.

Though Xer'Sai usually have no interest in religion, one might think they are blessed by Malar, God Of The Hunt, when observing their hunting practices.

Abyssal, though they can learn other languages if so desired. Most Xer'Sai pick up the language of the locals when staying in one area for a longer period of time as it helps them lure prey when hunting.

Voidborn always have their name split up in 2 parts by a ' symbol. For example: Rek'Sai, Jar'Zin or Kas'Zul.