"Vengeance cannot be a part of what we must do. If we allow our passions to turn to bloodlust, then we will become as vile as our enemies." -Uther, the first Lightbringer.

The Oath of the Lightbringer is an oath one takes when they truly devote their life to the light. The oath stretches back for thousands of years, and the Paladins that have taken the oath have gone down in history as paragons of virtue. To become a Lightbringer means to put aside worldly desires in order to protect others, to be honorable above all things, and to understand that their life is a weapon simply to defeat the evil and unjust that exists in this world. Although righteous vengeance is certainly a tenet of the Lightbringer, vengeance for vengeance's sake simply cannot exist. Having a desire for battle and understanding that battle is a necessary evil in this world is what separates the Lightbringer from others. Through the light, all things are possible, but only what is necessary should be done. The crest that Lightbringers bear is a symbol of Honor, Devotion, Compassion, and Justice, thus their true tenets. 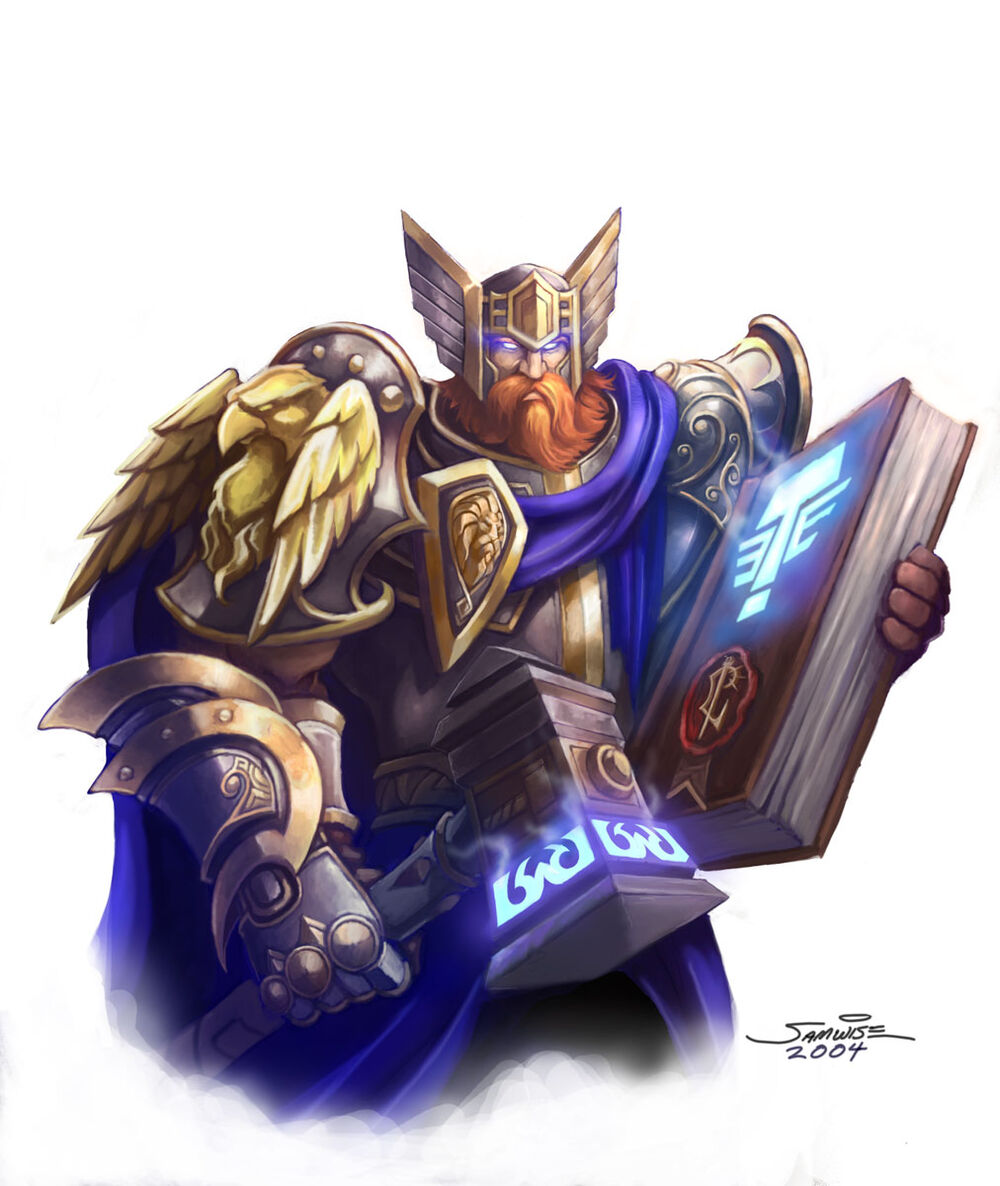 A Paladin as depicted by Samwise Didier, Senior Art Director for Blizzard Entertainment.

Tenets Of the Lightbringer

Honor: You are bound to your word, breaking it would break you. You will never dishonor yourself, your family, or your order, and you would rather die than do so.

Devotion: You are bound to your cause, your friends, your family, and your order. You will never betray them, and you would rather die than do so.

Compassion: You are bound to share the suffering of others. You must do all you can to alleviate one's suffering.

Justice: You are bound to the pursuit of divine righteousness. You must do all you can to see that those who are truly evil be brought to justice.

Oath of the Lightbringer Spells

Each oath has a list of associated spells. You gain access to these spells at the levels specified in the oath description. Once you gain access to an oath spell, you always have it prepared. Oath spells don't count against the number of spells you can prepare each day.

Additionally, as you level up, you gain the ability to gain Cleric spells and spell slots. From the 3rd level onward (when you take the oath), you use the follow spell slot chart instead of the default Paladin one.

When you take this oath at 3rd level, you gain the following Channel Divinity option:

As an action, you call down judgement upon your enemies in the form of a divine bolt from the heavens. This effect grants your attacks advantage against the creature for the next 18 seconds. You additionally deal radiant damage equal to your Paladin Level + CHA bonus to a single target within melee range. Upon reaching 5th and 11th levels, you learn seals that can be expended in tandem with Judgement, granting additional and powerful effects.

Seal of Righteousness - You imbue your weapon with additional holy power before striking with great vengeance upon your foe, dealing an additional Paladin Level x CHA bonus radiant damage.

Seal of Justice - You raise your weapon in the air and repulse your enemies away from you with divine power. All hostile creatures within 30 ft of you that are no more than one size larger than you make a Wisdom saving throw. When you beat a creature's opposed check, that creature will be forced to move 5 feet away from the paladin, plus an additional 5 feet for every 5 points by which your check result is greater than the defender’s check result. Enemies successfully moved fall prone and are stunned until the end of your next turn.

Seal of the Crusader - You strike out with the combined strength of those who are unable to defend themselves. You apply a Mark of the Crusader upon a creature that expires after 30 seconds, causing all radiant damage done to the target to apply an additional 1d8 radiant damage. Successful melee attacks refresh the effect on a marked creature.

Seal of Fury - You cry out with divine fury, daring all who oppose you to show their mettle. You cast Compelled Duel on all hostile creatures within 30 ft of you. No concentration check is required to maintain the effect, however the spell only lasts for 15 seconds.

Seal of the Templar - You call upon your deity to protect those around you. For the next 18 seconds, you can perform reaction abilities without using your reaction.

Seal of Command - Holy power flows through you and consecrates all ground within 15 feet below you, dealing 1d4 radiant damage per turn to all enemy creatures who stand on it per turn.

Seal of Light - You present a holy symbol and evoke healing energy that can restore a number of hit points equal to your Paladin Level x Charisma modifier to all allies within 30 feet. You can’t use this feature on an undead or a construct.

Seal of Truth - You invoke the Censures you have placed on a creature, dealing an additional 1d6 radiant damage for every stack expended. You do not need a full stack of Censure to use this ability.

Seal of Wisdom - You call upon the wisdom of paladins before you to aid you. You apply a Mark of Wisdom upon a creature that expires after 30 seconds. When successfully attacking a creature with the Mark of Wisdom, roll a d100 against a DC of 90 - (Paladin level + Paladin's CHA bonus). If the check passes, the attacking creature may instantly cast a spell with a slot no greater than half of its proficiency bonus at no cost. Successful melee attacks refresh the effect on a marked creature.

Seal of the Martyr - You call upon the light to grant you the strength to perform one last miracle. You sacrifice yourself, dealing 10 radiant damage for every health point expended to a single target or granting 10 health for every health point expended to all friendly creatures within 30 feet, killing yourself in the process. Upon sacrificing yourself, the only way to be brought back to life is with True Resurrection.

Auras of the True

Beginning at 3rd level, you can passively channel an aura that give certain effects. Auras can be activated or deactivated as a free action during your turn. Only one aura can be channeled at a time, and you may only change auras once per turn.

At 18th level, the range of any above effect extends to 30 feet.

Additionally, beginning at 3rd level, you find, are given, or otherwise receive a holy spellbook that is blessed by your deity, functionally similar to a Wizard's. The spellbook can function as your focus. Only Paladin, oath, or Cleric spells may be recorded in the spellbook. For prepared spells that have been recorded in this spellbook, provided you are able to channel energy from the spellbook when casting (have it externally on your person, i.e. not in a backpack or otherwise concealed) and no greater than your proficiency bonus, you can make a CHA saving throw + 1/2 of your Paladin level rounded up, equal to the Spell Level x 3 + 8 to not consume a spell slot. If the saving throw fails, you either consume a spell slot as normal or the spellcast fails entirely (at your discretion). You also gain access to a number of Cleric cantrip slots and Cleric spell slots in the above spell slot table.

Seals of the Anointed

Beginning at 5th level, you learn to channel seals that augment your ability in combat. Seals last up to 30 seconds and may be expended in tandem with Judgement to create additional effects. Seals can be activated as a bonus action during your turn. Only one seal can be channeled at a time.

Blessings From On High

Beginning at 7th level, you can cast a blessing as an action that will apply to all willing creatures within 30 feet. Blessings last up to 10 minutes, and only one blessing can be active on a creature at a time. Blessings can be dismissed at any time, no action required. You may use blessings a number of times equal to your Charisma modifier. You recover any used charges after a short rest.

Also, whenever you use a spell with radiant or healing power, you treat the spell as if it were cast with a spell slot one level higher.

Improved Seals of the Anointed

At 20th level, you can assimilate the properties of your own holy light and become empowered, turning into an Avatar of your God. You sprout 2 angelic wings out of bright radiant light, and your holy aura becomes so strong that it becomes tangible and visible by the naked eye. It ranges all around you but retains a strong presence over your body and around the weapons that you wield.

Using an action, you undergo a transformation. For 1 minute, you gain the following benefits:

Once you use this feature, you can't use it again until you finish a long rest.