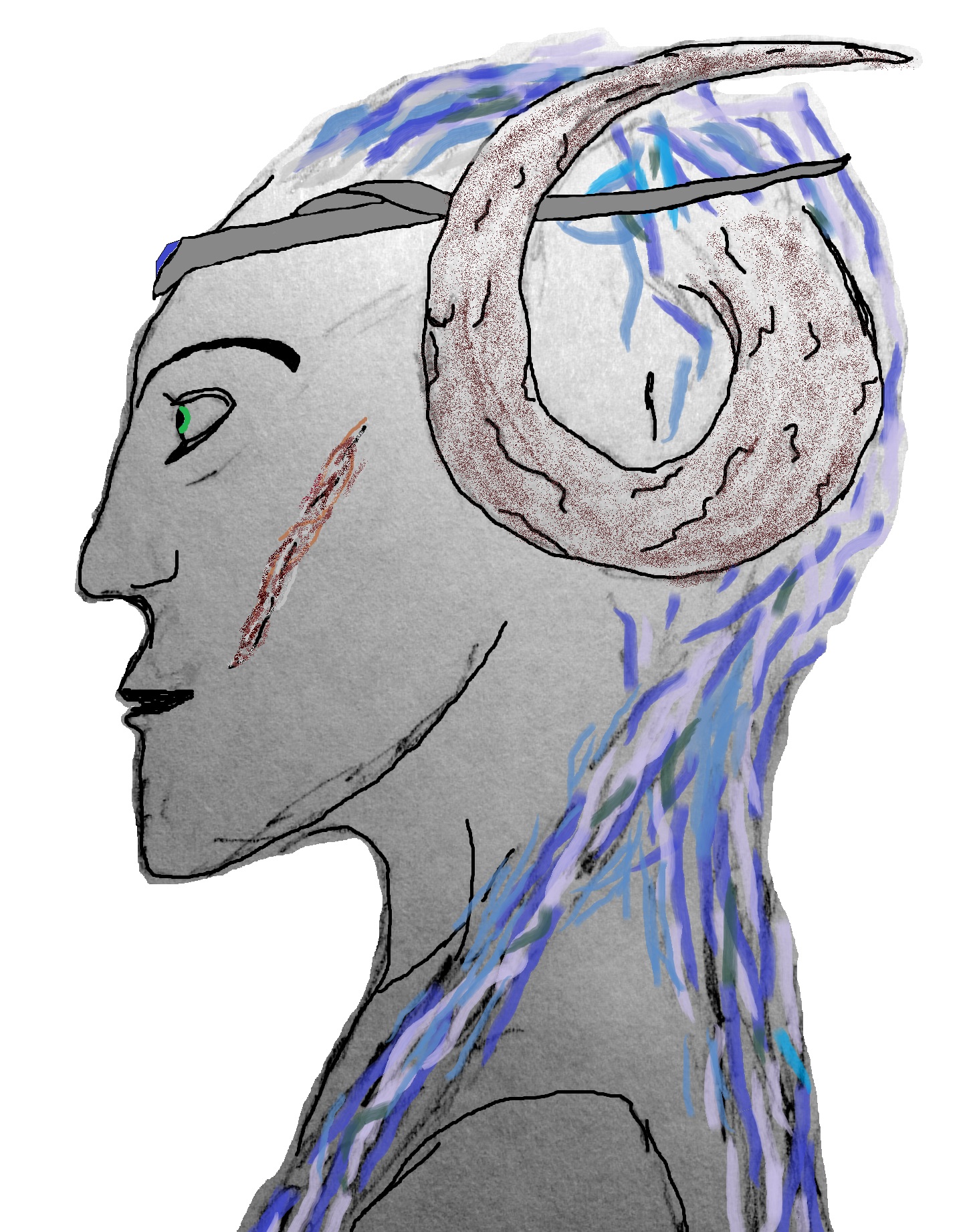 Someone with actual artistic skills redo this please.

The Tuatha De Dannan (singular Tuath De Dannan, often known as Tuath, pl. Tuatha), are an ancient and powerful magical race that once inhabited great stretches of land. They were not known for building great structures, and they build almost nothing out of stone. As such, they are remembered (if at all) usually in wild tales passed down from early settlers in the lands. The only lasting reminders of their once great power are the few standing stones inscribed with their flowing, twining script and with knotted and spiraling art; that, and the mysterious unnatural mounds of earth that some believe are still haunted with their spirits. In a way, this is true. Despite their prowess in battle and near immortality, their race began to decline when younger, shorter-lived races began to do battle against them. No matter how many attacks the Tuatha beat back, these faster-reproducing races were able to replenish their ranks almost as soon as they were depleted. And so the Tuatha decided to retreat into hiding, taking up residence in the deepest parts of forests and beneath their cairns, which served as entry points into the mysterious Otherworld.

The Tuatha De Dannan usually stay out of the way and out of the minds of “younger” races. They are slow to go to war for any reason, as their long lives and slow reproduction makes it difficult to overcome large numbers of deaths. They also have a deep connection to every other member of their race, and feel great pain at the deaths of others of their kind. The death of a Tuath is rare, so this does not affect them overly much unless a large number die. As a rule, they respect all life, even the lives of the animals they use for food and clothing. They are quiet, thoughtful, and slow to anger. They think about the consequences of every action before they take an action, and thus are known for slow deliberations and conscientious actions. The deep connection between every member of the Tuatha makes it necessary that they act with the greater good above their own desires. Within their own communities, their daily lives are much similar to those of other races, except that they do not build cities, but live in wooden collections of huts or even built into trees. They also spend a lot of time telling stories, singing songs, and creating works of art.

Tuatha range in height from around five and a half to six and a half feet. They weigh between 100 and 180 pounds. Altogether, they have a slightly treeish appearance, leading some to believe that they are related to dryads. Their skin is a combination of silvery skin accented with graceful streaks of bark-like toughness. They have growths from their heads that appear as a mixture of curling ram's horns and branches. They generally grow their hair out. Colors of hair include gold, silver, bluish-silver, blond, grey, and white. The most notable feature about their hair is that it appears to be composed of wisps of colored fire. Their eyes burn with an inner fire that, when in darkness, gleam with a faint light. When they move, they move deliberately and often slowly, thinking before they do anything, thinking about every consequence for every action. When they are moved to great emotion, the light in their eyes burns brightly, and their fire-like hair seems to burn with fury, giving them a frightening appearance when angry.

They have natural affinities with animals, and are skilled riders. Often, they will use the Silver Steed or Silver Wolf as a mount, but this is to accomplish mutual goals. They do not subjugate them to their will.

Tuatha have little to do with the outside world. The few that pass through the realms of men make little or no impact. Some have been known to take up residence near sparsely populated areas, observing and possibly helping out whenever they are needed and can do so without drawing attention. A very few of the more powerful who are willing to interact on this level can come to be regarded as household or community deities. Some are resentful towards the other races, as they feel that these races are responsible for the downfall of the Tuatha. Their near agelessness makes it difficult for them to separate the actions of the ancestors from the characters of the descendants, but most recognize that the current inhabitants of the land had nothing to do with the wars of the past and harbor no ill will. They realize that the best thing to do is to press forward, trying to live alongside these species, trying to do what is best not only for their own kind but also for the good of peaceful civilization.

The Tuatha are mostly lawful good or lawful neutral. They are lawful towards their own customs and ways, and care little for the laws of men. They will try to avoid confrontation, so they will usually abide by the laws of the land they come to as long as they do not conflict with the ideas and laws of their own people. If they are evil, then it is only in regards to other races that they show their brutality. There have been a seldom few who have gone mad and reveled in the pain of the death of their kin, but that is rare indeed.

Even though the Tuatha often live in the deep forests, they live mainly in the Otherworld. The Otherworld is another small, material plane closely knit with certain areas of the normal lands. There are certain areas in the forests that allow for passage between these worlds, such that an unwary traveler may find himself in the dangerous Otherworld. Mounds and standing stones that dot the landscape often mark areas where these connections are particularly strong. These connections are strongest at the solstices and equinoxes at twilight. In fact, passage between the worlds is only possible just as the sun sets. The Otherworld itself was created and is sustained by the goddess Danu, who is their greatest deity. The world itself is filled with similar creatures and plants as the normal world, but everything looks and feels different. Colors are more vibrant, and plants and animals are often much larger, and seem to glow with ghostly light. Every non-sentient animal and plant in the Otherworld gains the template Otherworldly. If every Tuath perished, the Otherworld would cease to exist, and the spirits of all living things would return to the world. There is no sun, and day and night, which pass at normal pace, are marked by the oscillation of the light that permeates the world from gold to silver and back. At night, when the land is bathed in silver light, stars move overhead, and two large moons circle each other as they traverse the night sky. During the day, the sky is like a canopy of soft gold, along with other colors, like just after sunset on a partially cloudy day.

They revere the goddess Danu, who is their leader and matriarch, and the goddess who created and sustains their land. In fact, they are believed to be descended from her. To say they worship her would be incorrect. They love her, and she loves them. She does not want or need their worship in the way that most gods require. She teaches that worship is something that even a god does not deserve, and that that kind of blind devotion only leads to chaos. The Tuatha respect and may even revere other gods whom they believe to be worthy, but they do not worship them. Their respect is won through deeds, not by power.

They speak Silvan, however much of their communication is done without words at all. Their deep connection allows them to be aware of the feelings of other Tuatha who wish to share those feelings. This connection does not allow for the detailed relaying of messages or communication to someone not immediately present, so they will speak if necessary.

They do not have true names amongst their own people, but will often refer to one another by short descriptors in the Silvan tongue. These names are not permanent labels, but descriptions of deeds or personalities. They will often take names for interacting with other races, usually similar to the names of those with whom they most often do business.