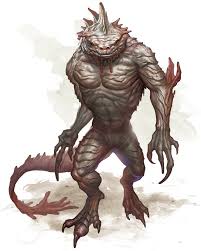 These lizard-like men are distant relatives of the yuan-ti and lizardfolk. Troglodytes are one of the creations of the almighty creator race, the sarrukh. Their creators had made them to be slaves, mindless and all muscle, to serve their more intelligent creations. At the eve of their empire, the troglodytes waged civil war against their masters. Many of them were enslaved further, while others managed to escape to freedom. Most of them fled to the Underdark and other dark cave systems to escape their former masters, where they live as little more than beasts.

Play an Troglodyte if you want...

Troglodytes look somewhat like humanoid reptiles, with thick muscular bodies. They walk erect on their squat legs, trailing a long slender tail. Their heads are lizardlike and many are crowned with a frill that extends from the forehead to the base of the neck, or even traveling the entire length of their bodies and tail. Troglodyte skin is a pattern of varying shades of grey and brown. When a troglodyte is angry or frightened, it secretes an oily, musk-like chemical that nearly every form of animal finds offensive. This secretion soaks into the possessions a troglodyte carries giving them a permanent stench that never goes away. Troglodyte eyes are black and beady.

Even when a troglodyte overcomes its evil nature, it can rarely find any acceptance among non-evil races. Troglodyte history is long and bloodthirsty. That coupled with the horrid stench that seems to always drift off of them, makes most creatures treat them with hostility. They are very warlike and savor the taste of their enemies, especially humanoids. These habits also cause most non-evil creatures to react negatively to them.

Garokk is a troglodyte barbarian. Raised as a slave warrior that served a coven of Mind Flayers, he has known little more than battle his entire life. When a group of adventurers destroyed the coven, he suddenly found himself free, and as the group descended upon him he surrendered and asked for mercy. Surprised the adventurers granted it to him, and out of curiosity, they began to question Garokk about his life and why he did not feel compelled to die for his former masters. The questions made Garokk truly think about those subjects clearly for maybe the first time in his life, and finding this new awareness, he asked the adventurers if he could accompany them. If only to help him find all the answers he seeks.

Durkott is a troglodyte fighter. His tribe has always served a great Drow lord as his elite bodyguards, and he has always craved the honors he could earn in that role. Durkott earned the highest of those honors when he selflessly risked his life in a battle against would-be assassins, saving his lord's life. As a reward the Drow lord granted Durkott his freedom and bade him go into the world and learn of it what he could, in that way he told him he could rise to one day be as powerful as his former master. Now Durkott travels toward the surface hoping to learn as much as he can and to gather enough power to one day rule a domain of his own.

Seskar is a troglodyte warden. Her family has always served her tribe as the guardians of the underground natural spring they use as a source of freshwater. Raised to respect the natural forces around her and to farm small edible fungus to help feed the tribe, Seskar is the closest thing to a holy person that the tribe has. When an inexplicable toxic substance began dripping into the spring from the cavern above, she sensed a great threat to her tribe was at hand. While she was loathe to abandon her people, Seskar has left her tribe and traveled into the world above hoping to find the source of this evil taint. Knowing she has traveled into a world alien to her she also hopes to find others who may aid her in her quest, if for no other reason than to help preserve the natural world.

The following feats are exclusive to the troglodyte race.