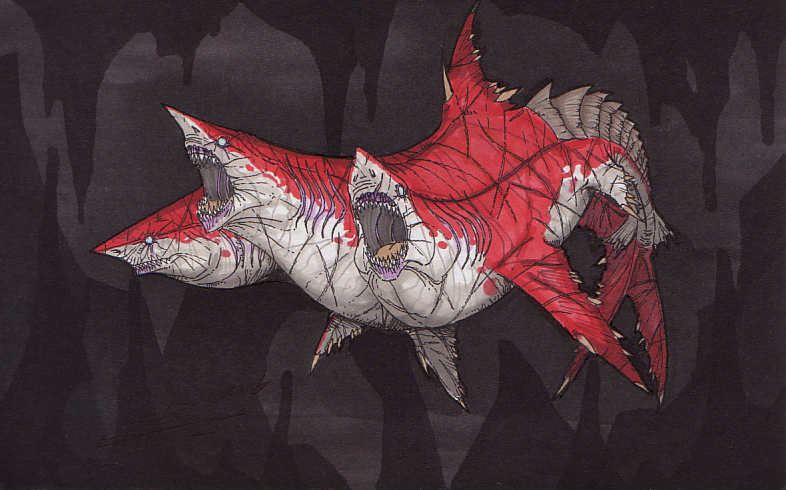 A bloody red shadow moves under your boat rapidly. As you peer over the edge you cringe in horror at the triple baleful roar of something behind you. From the water a giant red three-headed shark with fangs wide open charges at you, sailing through air as effortlessly as water.

The triglav airshark is a product of the lower planes. They can be found anywhere within the waters of the Styx, immune to it's mind-wiping effects, and haunt the shores waiting to ambush travelers in, and near, the waters edge. The triglav airshark is equally dangerous in the water, in the air where magical flight sustains it, and on ground slithering like a snake on it's mucus-slicked underbelly.

A triglav airshark understands, but not speaks, either Abyssal, Infernal, or Aquan depending on its typical hunting grounds.

A triglav airshark is a cunning foe which will find a target and stalk them relentlessly in the shadows until a time of weakness, such as any of the various dangers and random encounters one may face in the planes of evil. Promptly they leap up and ambush their opponent, biting and rending in a frenzy, until it is wounded or the target is dead. It then retreats with prey in its mouths, and will continue stalking its targets until they are all dead.

Like a hydra, each of the heads may attack with their bite as a standard action. It uses this to great effect, using flyby attack to gain not one, but three strikes, and possibly a rend, then promptly retreating.

Rend (Ex): If a triglav airshark hits with at least two bite attacks, it latches onto the opponent’s body and tears the flesh. This attack automatically deals an additional 4d6+6 points of damage.

Blindsense (Ex): A triglav airshark can locate creatures underwater within a 30-foot radius. This ability works only when the shark is underwater.

Blood Frenzy (Ex): 1/encounter after drawing first blood from the opponent the triglav airshark can enter a frenzy similar to a barbarian's rage. It gains +4 Str, +4 Con, +2 on Will saves, and -2 AC, and lasts for 3+Con modifier rounds. During this time, it loses its sense of other dangers and will try to keep attacking the same opponent over and over, short of being prevented from reaching the target or the target perishes (in which case it is free to choose another). Afterward the triglav airshark is fatigued for 1 minute.

Flight (Su): A triglav shark can cease or resume flight as a free action.

Keen Scent (Ex): A triglav shark can notice creatures by scent in a 180-foot radius and detect blood in the water at ranges of up to a mile.

Skills: A triglav airshark has a +8 racial bonus on any Swim check to perform some special action or avoid a hazard. It can always choose to take 10 on a Swim check, even if distracted or endangered. It can use the run action while swimming, provided it swims in a straight line.