The TA-4G Treadscout is the newest in Aperture Magic's military weapons design, a fully autonomous weapons platform that can traverse almost any land-based obstacle.

A treadscout draws arcane power for its operation from a stable and contained fissure to the elemental plane of fire, allowing it the power to move and discharge its main weapon. Part of the treadscout's heavily armored canopy can be slid back to reveal a one-man compartment for a pilot. Treadscouts are 15 feet long, 10 feet wide and 8 feet tall, weighing in at 22,000 pounds. They have a sustainable top speed of approximately 30 miles per hour and thanks to the maneuverability granted them by their quadruple tracks, they can turn 360 degrees in place. A Treadscout has a luggage compartment with room for 350 pounds of carried goods. 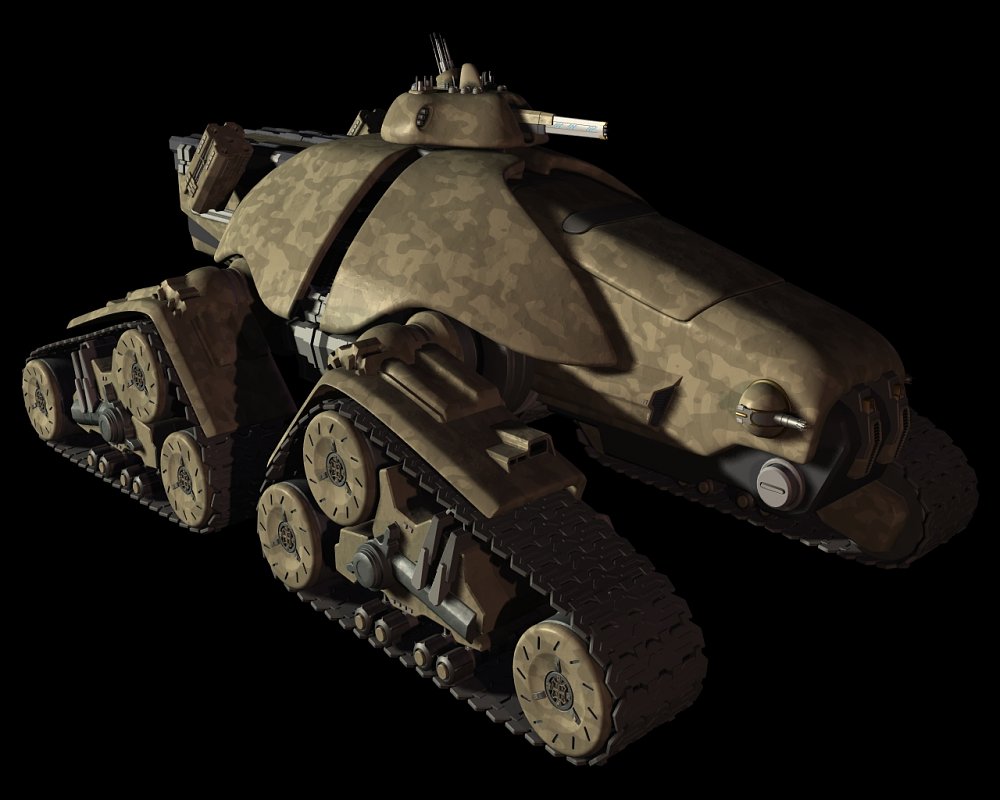 Treadscouts are constructs built as compact battle tanks, constructed to be able to reach virtually any place intact and keep its pilot alive even in hazardous circumstances. As a siege platform, it possesses a cannon that transmutes highly concentrated fire drawn straight from the elemental plane of fire into a plasma that is especially effective against objects and constructions. Thanks to its tracks, a Treadscout is able to move through virtually any terrain that it can clear with undiminished speed.

Reinforced Plating (Ex): The Treadscout's military grade armor plating gives it many advantages. The Treadscout's +3 reinforced plating bonus acts as a substitute Constitution modifier with respect to its hit points per HD, its Constitution-based special attack save DCs and its Fortitude saves.

Flak: Flak is a combination of high powered slag and langrage aimed to take down flying enemies. It can only be used to target creatures in flight. The Treadscout has a +4 competence bonus to attack using flak weapons. Unlike flak, the Treadscout's plasma cannon cannot fire in the air.

Plasma Cannon (Ex): The Treadscout's main weapon fires coherent bursts of plasma that erupt on contact with the ground. The plasma cannon functions like the fireball spell at caster level 10th, having a range of 800 feet (Long) and a damage potential of 10d6 in a 20 ft. radius spread, half of which stems directly from plasma and cannot be reduced even by resistance to fire. A plasma cannon deals half again as much (+50%) damage as normal to unattended objects, buildings or other constructs. When a construct protected by a shield is hit by a plasma cannon burst, only the part of the damage that gets past the shield's absorption is increased by an additional 50%. Creatures hit by a plasma cannon burst may attempt a DC 19 Reflex saving throw to halve the damage. The save DC is Constitution-based.

Firing the plasma cannon is considered a full-attack action, although the Treadscout is still able to move up to its base land speed during the attack.

Run Over (Ex): A Treadscout can run over creatures of Medium size and smaller with a successful melee touch attack, dealing 4d6+10 damage unless the defender succeeds on a DC 22 Reflex save. The save DC is Strength-based. It may still attempt to bull rush creatures of size Large or Huge this way.

Sensors (Su): A Treadscout's sensors give its pilot a +4 competence bonus to Listen and Spot checks and allow it to make such checks in reaction to anything within range of the Treadscout's various modes of sight, regardless of direction or awareness and as long as the pilot or vehicle has line of effect. At a successful check against a creature or object, the pilot becomes immediately aware of it.